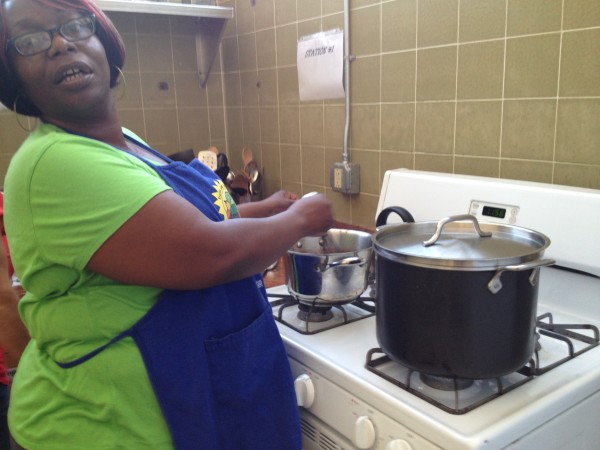 San Francisco’s Women’s Resource Center is housed in a concrete building near the elevated highway and across the street from the city jail. On a recent summer day, the weather was chilly, the center’s large classroom was cold and the small tables crowded. Most of the students were there to serve part of sentence for a recent crime. Some were just out of jail, some were on probation or work release, and others were ordered to take courses instead of serving time behind bars.

But despite the San Francisco chill and the difficult circumstances that brought these women together, the mood and the room warmed up quickly. The students were in a cooking class that emphasized fresh and local foods, and the small industrial kitchen off the classroom heated up quickly with warmth from the oven and tantalizing smells. The menu for the day: sweet potato chili and Greek salad with fennel.

“Teaching women about health care and nutrition is a way to teach women how to take care of themselves,” explains Susie White, the executive director of NextCourse, the non-profit that offers the class at the center. White, who had a long career in the criminal justice system before joining NextCourse, says that when the class began, they couldn’t find any similar offerings to serve as a model for the curriculum, so they started from scratch too.

The course began in the jail itself, helping students behind bars pick up some new math skills while they learned more about healthy foods. The program has since reached out to a number of disadvantaged populations in San Francisco, including children from low-income neighborhoods, the mentally ill and victims of domestic violence.

The class at the Women’s Resource Center, a public/private partnership between the sheriff’s department and non-profits including NextCourse, is one of several offered to teach life skills to women who have been involved in the criminal justice system. The cooking class has been offered for five years and students attend on a drop-in basis.

The focus of the cooking course is on improving nutrition rather than developing expert cooking skills. In each class, the students are introduced to a new food – in this week’s class, students encounter fresh fennel, many for the first time. This summer they will also learn about quinoa, kale and the benefits of small swaps — like eating whole grain brown rice instead of white rice.

Vera Pittman, who teaches the class, starts by emphasizing all the good reasons to think about vegetables as the star of a meal. The sweet potato, she explains, is full of beneficial vitamins and minerals. The class reads aloud a list of the tuber’s virtues: a health powerhouse, one that’s often wasted in desserts. “Sugar,” she says, “defeats the purpose.”

“Are sweet potatoes better than white?” a student raises her hand to ask.

Pittman confirms that they better – and reveals she has a weak spot for starch. “I like comfort food,” she admits. But she has sworn off some of her favorite foods, including white rice, for healthier whole grains.*

Pittman walks the fennel around the room so the students can inhale the smell of licorice before everyone heads to the kitchen. Under the watchful eye of Pittman and volunteer Sheila Middleton, who trained at the California Culinary Institute, the students start chopping.

The class emphasizes using whole foods. “When you teach someone to read a label,” White explains, “you are already teaching them to eat processed food.” But they try also to take a realistic approach and practice making affordable meals that use healthy convenience foods like the canned tomatoes and canned black beans. Most of the ingredients they come from Trader Joe’s and some are prewashed, like the greens that will go into the Greek salad, making cooking easier.

The course also takes students on a tours of supermarkets including Trader Joes. “Most students haven’t experienced that before,” White explains. They also ask students to chose a store to tour, and at their request they have also visited Foods Co., a discount grocery chain with a store in Bayview.

Rebecca Kennedy, 52, says she dropped into the class frequently as part of her sentence. She wore a bright orange reflective vest, the uniform of women in the jail’s work release program. She was convicted of driving under the influence and spent 40 days in jail before work release.

Now in recovery for alcoholism, she is planning to make changes to her meal choices once she is back at home fulltime. She has three children and used to make them meals like hamburgers, she says, but she plans to incorporate recipes from the class into her cooking. Health isn’t her only motivation. “It’s really good when we sit down and eat it,” she says.

The students also get lessons in life as they worked through recipes. “You have to follow the instructions,” Pittman says as she guides one student through the steps of making salad dressing. “That takes you a long way.” Pittman first took the cooking herself class when she was serving a jail sentence. She became an instructor in 2010 after working as an intern after her release.

Following recipes taught her the benefits of following rules in life, she explains. She learned that a big part of success in challenges like finishing school and getting off of probation was showing up when she was supposed to and listening. She’s now completing a degree program in addition to her work for NextCourse.

Those are very difficult changes to make, says Kim Courtney, an outreach director at the San Francisco jail. The women she counsels are wracked by addiction and are often victims of abuse. They are marked by the stigma of having been in jail and rarely have anyone at home waiting to take care of them because they are the primary caretakers. It’s difficult for women in these circumstances to complete everyday tasks most people take for granted, like getting along with difficult co-workers.

Still, there are limits to what they can accomplish in a drop-in class that meets once a week. “We will take two hours,” White says, “and try to make some changes in their lives.”

Rebecca Kennedy feels like the class has already made a difference for her. She finished her work release sentence the first week of August, a few days after the class made sweet potato chili. Cooking differently is just one of the changes on the horizon for her. “My life is started now,” she says. “So much is in bloom right now.”

*Note: This story has been corrected. An earlier version stated incorrectly that Vera Pittman has high blood pressure.