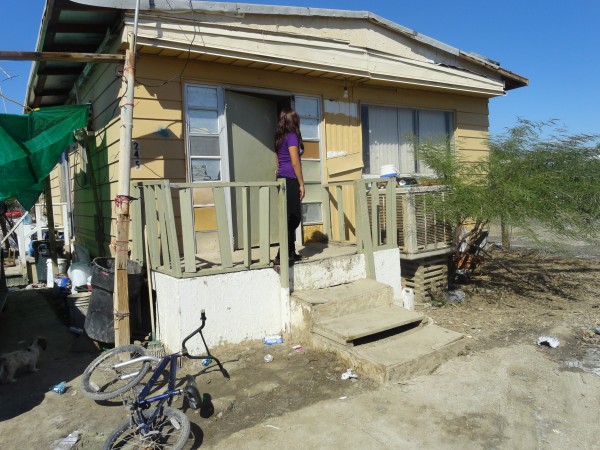 A new report spotlights a harsh reality in the Eastern Coachella Valley: the water, air and soil there are polluted – significantly more so than the West Valley and Riverside County as a whole.

The study is called “Revealing the Invisible Coachella Valley. Analysts from UC Davis crunched the numbers on environmental hazards, and then overlaid data on social issues such as poverty, education and employment. The end result is a measure called a Cumulative Environmental Vulnerability Assessment (CEVA).

The CEVA shows that although community groups and local agencies are fighting for improvements, much more needs to be done. The report cites in particular concerns with contaminated drinking water, excessive pesticide application, failing septic systems, illegal waste dumps, inadequate housing and unpaved streets. In one of the more notorious cases, kids at an elementary school in Mecca became ill – allegedly from odors wafting over from a toxic waste facility next door.

The CEVA shows that the eastern part of the Valley has more than twice the pesticide applications and contaminated bodies of water – as compared to the west side of the Valley. The east also has about double the number of people of color, people in poverty, and unemployed workers as compared to the WCV. In addition, the Eastern Coachella Valley has almost triple the number of people who speak only limited English. Many of those are undocumented and lack health insurance.

The report mapped out the data and found that 81 percent of people in the Eastern Coachella Valley live in what researchers call a Community Environmental Vulnerability Action Zone.

The report was funded by the California Endowment and the Building Healthy Communities program.*

“Those who care about rural communities need to understand that there are some places and populations that lack the resources to protect their health and achieve prosperity,” says lead researcher Jonathan London. “This study provides a blueprint for collaborative action to lift up the rural eastern Coachella Valley as a sustainable and equitable region.”

The researchers gathered data on the following environmental hazards:

The study then quantified the following social factors:

The California Rural Legal Assistance’s Community Equity Initiative helped UC Davis choose which environmental problems to measure. CRLA’s Phoebe Seaton says this report fills in data that was missing from other analyses, particularly the CalEnviroScreen, which came out this spring. “Ironically it showed the community as less disadvantaged than we all know it to be,” she said. “One reason is that it did not include toxic sites located on tribal land. So this report could be very useful in allowing them to access that information.”

On September 11th, 2012, Mother Nature threw some of the more pernicious environmental problems into stark relief. A storm stirred up the stinking rotted organic material in the depths of the Salton Sea – spreading noxious odors all the way to Los Angeles. People in the Eastern Coachella Valley have been putting up with nasty smells from the Salton Sea for years. The sea has been shrinking for decades. Agricultural runoff lcauses periodic algae blooms. The algae lower the oxygen levels in the water, leading to massive fish kills. The government has funded multiple studies to save the Salton Sea but has failed to fund any of the proposed solutions because they run into the hundreds of millions of dollars.

The largest mobile home park affected by the flood, called Duroville is a good example of the multiple health and environmental issues faced by residents of the area: dilapidated utilities, overcrowding, and illegal dumping, all exacerbated by severe poverty.

Before the flood, Duroville was home to 4,000 people crammed into just 194 dilapidated trailers on 40 acres of land. There are no sewers, just makeshift pipes that empty out into a collection pond. Water comes from two wells on site. Makeshift electrical wiring caused fires on a regular basis. All of these substandard systems were overwhelmed by the flood: two feet of water came rushing through the park, forcing the county to evacuate Duroville and put people up in a shelter at the local high school for a week. The floodwaters also pounded the illegal dump on the property next door, destroying rats’ nests there and sending hordes of vermin scurrying into the trailer park.

Duroville sprang up on lands belonging to the Torres Martinez tribe, making it difficult for non-Indian authorities to regulate the property. In 2009 a federal judge ordered the place shut down, but it took four years – until June 30th of this year – to move everyone out. Most of the families moved into a new trailer park built for $27 million, mostly with taxpayer money. Now the county is spending $900,000 to remove the asbestos and bulldoze the shacks.

The problems that closed down Duroville, however, plague hundreds of smaller, similar parks across the rural landscape.

The study’s authors hope that community groups and lawmakers will use the data to address these ongoing problems. The authors write that the areas highlighted in the report “can serve as target areas for coordinated action and investments by public agencies, elected officials, foundations, businesses, advocates, and residents. No one entity or sector can accomplish this agenda alone.”

In fact, multiple efforts are underway. Community group Pueblo Unido is installing water filtration systems to remove traces of arsenic and chromium-6 that occur naturally in the well water in the eastern Valley.

A group called Promotores Communitarios del Desierto (PCD) organized a large conference on environmental justice in February, and just received a grant to hold it again this fall, and another in the Imperial Valley. PCD’s director Eduardo Guevara says, “People are starting to show more interest. A lot of people live with the environmental problems but don’t know about them.”

PCD is promoting a new computer system called IVAN, where residents can report cases of pollution. Complaints are then forwarded to the appropriate government agency.

County Supervisor John Benoit has been working to improve environmental and health issues for many years. He recently helped secure funding to add a new bus route to and from the North Shore area, which has 3,000 residents but no doctor or clinic. The new route starts in September.

Benoit also worked with the South Coast Air Quality Management Board to put a million dollars to pave dirt roads at the entrance to dozens of small mobile home parks. “We hope that paving these roads in and out will improve their health by reducing the dust kicked up when people drive in and out of the parks each day,” said Benoit. The paving crews are set to begin work in the next few weeks.

*The Endowment is also a funder of calhealthreport.org