A play for child mental health in Long Beach 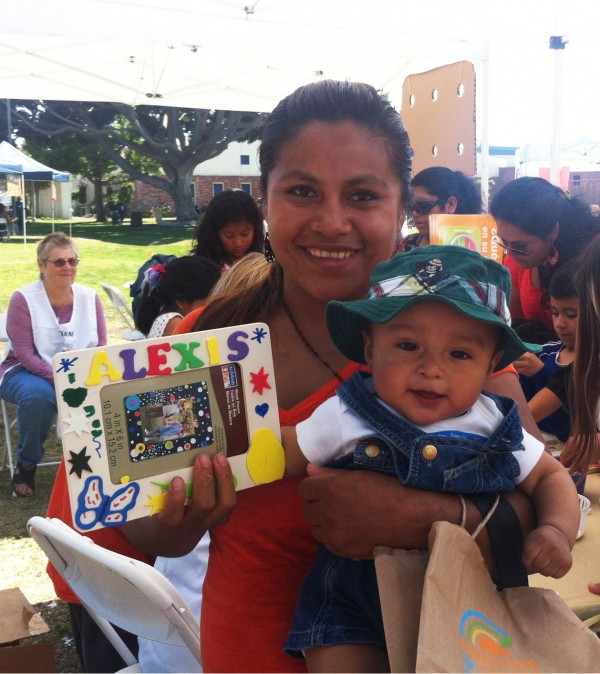 There was plenty of craft-making, face painting, and parachute bouncing on a recent Saturday in Long Beach where 200 families gathered for Me & My Shadow Family Fun Day.

Maria Martinez was clutching her 6-month-old Alexis, one of the youngest attendees at the all-day fair, held at the Martin Luther King Jr. Park.

“We planted some flowers in the Peace Garden and we went to a booth where they showed how to brush teeth, and then we went through the bubble station where the kids go through the bubbles,” said Martinez. “This is a de-stress activity and it’s really helpful for me and my son,” she said.

But this fair wasn’t just fun and games.

The event was sponsored by Project ABC, a local collaboration of agencies, including the Children’s Institute, the Los Angeles County Departments of Mental Health’s Children and Family Services, Pacific Asian Counseling Services, and other organizations. It brought families and communities together with the goal of strengthening the bond between parents and young children under age five. The day, which corresponded to the National Children’s Mental Health Awareness Week, brought caregivers, care providers, professionals and others who work with young children together to collaborate on ways to further bolster that adult-child relationship.

“We have all these toys and it’s not about whether they can toss them in the bag or in the hoola hoop, it’s what’s happening in the interaction between the parent and the child,” said Adriana E. Molina, Director of Social Marketing and Violence Prevention at Project ABC, which was formed to create a system of care for young children who are in need of mental health services in the L.A. area.

“Just by transferring a ball, you are reading them and knowing their cues and teaching them about non-verbal communication,” said Molina, watching as children scampered from booth to booth with parents in tow.

Behind the craft booths were also a slate of service providers parked in mobile trailers, offering a range of free screenings and assessments for the little children. Hospitals offered blood pressure checks for parents and lung function tests as well.

Belinda Villalpando, a marriage and family therapist with group, For the Child, spent the day promoting reading. Inside the van were boxes of books — some with mirrors, which helped to teach body awareness. Others taught children about the rituals of going to bed.

“Reading helps bring parents and the child closer, especially with mental health because sometimes they are disconnected and teaching and reading to them helps their relationship grow,” she said. Parked nearby, at the Harbor Regional Medical Center’s trailer, experts were conducting “ages and stages” questionnaires — short screenings to help families identify if their kids are developing typically. The goal is to identify children who are behind in certain areas very early and get them connected to resources so they can catch up and make progress in school.

While the preventing mental health problems is a daunting challenge, research in the past decade has demonstrated the significant impact of infant and early childhood experiences on brain development, developmental functioning, and long-term social-emotional adjustment, according to Project ABC.

A secure “attachment relationship” between parent and child has a significant effect on brain development, according to a study by Allan N. Shore in the Department of Psychiatry and Biobehavioral Sciences at UCLA. “The infant’s emerging social, psychological, and biological capacities cannot be understood apart from its relationship with the mother,” he wrote.

On the other hand, trauma early in life can permanently damage the physical, neural structures of the brain and place children at risk for severe emotional problems. In the U.S., about 872,000 children were found to be victims of child abuse or neglect in 2004, according to a report by Project ABC. Research shows that maltreatment of children has negative effects that last a lifetime, ranging from developmental disabilities to social problems with other children and adults.

Brijette Moses, a godmother to 3-year-old Isaiah, is very mindful of that. She came to the Long Beach fair not only to take Isaiah to the My Bubble Space booth, where he was happily enveloped in a soapy film. She also brought him there because the little boy’s therapist recommended it. Moses, who is in the process of adopting her young relative, said she pre-emptively sought out behavioral therapy for him.

“I put him in there because [another family member] had a bad temper problem,” said Moses. “I saw some signs, so I put him in there before it starts.” Mental health benefits aside, their day at the fair was also just a day at the park. “I didn’t expect it to be this fun and educational,” Moses said, “I had a ball.”

A play for child mental health in Long Beach