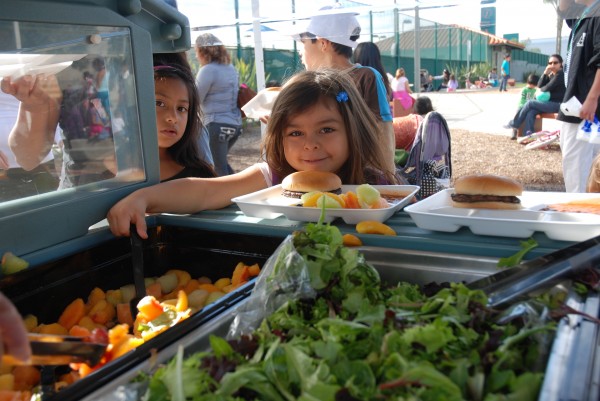 “Many parents don’t have enough money for healthy food, or they leave for work very early in the morning so it’s difficult to feed their kids,” said Gloria Arizaga, who has been serving meals to children in the North Monterey County Unified School District (NMCUSD) for 30 years. She speaks Spanish as her first language, like many of the students in her district—over 70 percent of whom qualify for federally funded meals.

“The breakfast and lunch we give to kids are the only meals they have during the school day,” she said in Spanish. “If they aren’t in programs during the summer, I imagine they don’t have enough food.”

Over half the kids in California receive a free or reduced price lunch at school—yet the majority of these low-income kids don’t receive federally funded meals during the summer. Now schools and community organizations are coming together to make sure summer lunch reaches kids in need, even if they aren’t in summer school.

According to California Food Policy Advocates’ (CFPA) analysis of California Department of Education (CDE) data, over 84 percent of those who benefitted from school lunch programs in 2011—more than 2 million children—did not use summer lunch programs. And the data show that this summer nutrition gap is widening. While the number of children eligible for free lunch has increased in California over recent years, the number of children participating in summer nutrition programs has plummeted. CFPA’s analysis shows that over the past ten years summer meal participation has decreased by over 50 percent.

This trend doesn’t reflect a lack of federal funding for summer nutrition—the funds are available, but the state isn’t using them. The CFPA report estimated that during July 2011, California missed out on $34 million that could have gone towards feeding the state’s low-income children. CFPA ties the growing summer nutrition gap to the decrease in summer school programs throughout the state.

“If you look at historical trends, the vast majority of summer meals for low-income kids are served by schools at school sites,” explained Tia Shimada, an advocate with CFPA. “With recent budget cuts, there is much less summer programming.”

Earlier this year, the USDA selected California as one of five states to target with additional technical assistance for summer meal programs—a decision driven largely by California’s declining participation rates.

“State Superintendent Tom Torlakson has been very proactive,” said Sandip Kaur, director of nutritional services for the CDE. “He sent out 500 letters to community leaders in February 2013, encouraging them to get onto summer food service programs—churches, libraries, Parks and Recreation departments, YMCAs, and Boys and Girls Clubs.”

This highlights an up-and-coming venue for summer meal programs in California: With summer school disappearing across the state, school districts and community organizations are forging partnerships to create a summer safety net for low-income kids.

Last summer was the first that NMCUSD partnered with the local parks and recreation center to help feed the community’s children. The rec center lies within blocks of Castroville Elementary School, where over 80 percent of students qualify for free or reduced lunch. Since the district already planned to serve meals for their two-week summer school session, they decided to feed kids in the community all summer long.

“We figured if we’re going to do summer school, why not take on more?” said Kathleen Cleary, Child Nutrition Supervisor for NMCUSD. “Our summer school session is so small, and the need here is so high.”

Arizaga was one of the servers on the catering truck they used to deliver food to local parks and low-income housing areas. At first, she wasn’t sure what response the community would have. But once word got out, neighborhood kids came running to meet the truck.

“They love that we offer them fruits and vegetables, and healthy food they don’t normally eat,” said Arizaga. “The part of my job I value most is la sonrisa de mis niños—the smile on my kids’ faces.”

In efforts to prevent obesity—an epidemic that disproportionately affects low-income children and adults—some summer lunch providers offer activities and education along with food.

“Our theme is ‘eat smart, play hard,’” said Norma Johnson, program specialist with San Diego Unified School District—one of California’s largest summer meal providers. “We host activities so it makes for a fun-filled event. That way kids aren’t sitting in front of the TV, playing video games and eating junk food. As a school district, we need to make sure the gap has been filled so learning doesn’t stop due to lack of nutrition and physical activity.”

Last year, SDUSD partnered with the San Diego Food Bank, local farmers and over 45 other community organizations to provide food at 68 sites for 48 days throughout the summer. In addition, they held 38 community barbecues with health resource fairs, fresh fruit and vegetable sampling and cooking demonstrations. At each of their sites, they offered a safe place for children to play.

One of the challenges is getting the word out to families in need, said Patrice Chamberlain, director of California Summer Meals Coalition. “The biggest thing we can do is engage credible spokespeople—teachers, principles, school board members—to let people know there are safe places to send their kids.”

As the school year comes to a close, NMCUSD, SDUSD, and other summer nutrition providers across the state are gearing up to spread the word in their communities through banners, flyers, radio announcements, newspaper advertisements and the Internet.

Of her district’s summertime reach so far, Johnson said, “It’s good, but we could do a lot more. We really need more children to come to our sites.”

The CDE posts summer meal sites on their website. People without Internet access can find site locations by calling 1-866-3-Hungry or 1-877-8-Hambre.