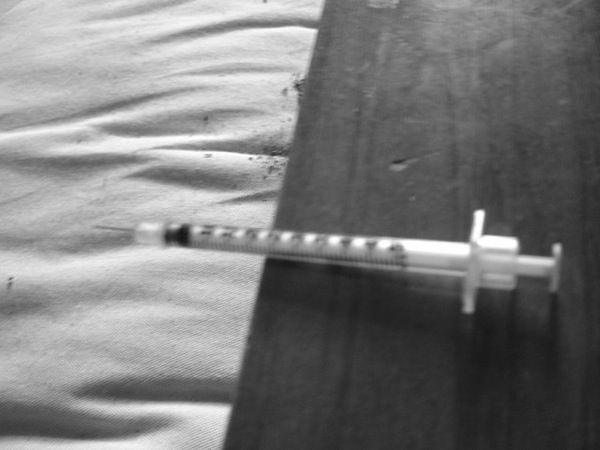 In 2000, California voters overwhelmingly approved Prop 36, a ballot measure that offers non-violent drug offenders treatment instead of jail. But now the Substance Abuse and Crime Prevention Act is on life support, if not altogether dead, despite data that shows it has saved taxpayers money and tamped down recidivism among its participants.

After an initial five-year allocation of $120 million to California counties for drug treatment, the legislature hasn’t approved additional funding, and counties have slashed drug programs while waiting lists for rehab grow longer.

Orange County is no exception, but unlike many counties, it still maintains a Santa Ana courtroom exclusively for Prop 36 cases.

Superior Court Commissioner Ed Hall, who presides over those matters, has tried to make up for at least some of the $8 million in state Prop 36 funding that the county has lost.

Cameras are rolling on a recent Wednesday afternoon as Hall calls Katherine Wimber’s case. The 20-year old stood beside her attorney, her sandy brown hair cascading down her back, as Hall ruled from the bench.

“It is hereby ordered that your conviction be set aside,” Hall intoned to applause from court staff, Wimber’s boyfriend, and her mom, who cradled Wimber’s two-month-old son, Murdoch on the hard benches in the audience.

Two years ago, Wimber was a suburban high school student-turned-heroin addict. Now, she’s a poster child for recovery from the wave of addiction to opiates—from prescription drugs like Vicodin and Oxycontin to black tar heroin—that has swept affluent South Orange County.

Hall is so pleased with the outcome of Wimber’s case that the dismissal is actually a reenactment for a TV crew from the town of Mission Viejo, where Wimber grew up. The publicity is part of Hall’s efforts to raise awareness about opiate addiction.

“It was so innocent, you just smoke it…it’s not like putting a needle in your arm. It’s just $10 to get high,” Wimber said.

But a couple of years later, the girl who said she once dreamed of a family, a white picket fence, and a career as a kindergarten teacher, was using needles, had overdosed twice, and was stealing to support her habit.

Wimber was a few days into a court-ordered Salvation Army treatment program when she realized that she needed help with depression and Post Traumatic Stress Disorder, which she says is the result of her experiences as a drug addict.

She came to Hall sobbing and asking to enroll in a local hospital program that would address her mental health needs.

Hall said he was thrilled to let her try.

Under Prop 36, defendants are granted probation while they submit to drug tests and attend 12-step meetings, detox, or rehab programs. If, like Wimber, they complete their programs, their cases are dismissed.

Wimber’s success was hard won. Like many Prop 36 clients, she’d failed at rehab before. But unlike most of her peers, she didn’t have to depend on county programs for recovery.

She attended a three-month long program at a private hospital that cost more than $4,000 and was covered by her parents’ insurance.

By contrast, many Prop 36 participants are poor and uninsured. Those who don’t qualify for Medi-Cal must either convince a rehab program to admit them for free or at reduced cost, or scrape together the cash themselves. For the less severely addicted, a bare bones program of 12 step meetings and drug testing costs about $200, while the tab for those with more serious problems is as much as $1100 for out-patient rehab.

Programs that offer both mental health and substance abuse care, like the one Wimber attended, are tough to get into, as is residential treatment. Participants who need a live-in program face waits of as much as three months, according to the director of a local treatment program.

Hall, who spent 30 years as a criminal defense attorney, tries to pick up the slack, occasionally stepping down from the bench to give face to face encouragement or a kick in the pants.

With his hands folded in front of his black robes as he huddles with a 30-something defendant on a recent Wednesday morning, he looks more like a minister than a judge. He is tall and slim with a full head of graying hair and a quiet demeanor. As he talks—out of earshot of the audience—Hall reaches out for a long moment to pat the man on the arm, as his defense attorney and a probation officer look on.

Hall could do his job somewhat mechanically; he sees about 60 people a day, and he’s required to do no more than send defendants to treatment, monitor their progress and sentence them or dismiss their cases.

But, Hall seems to relish making connections with those who come before him, and revels in their successes. After Wimber’s dismissal he invited the family to his chambers and they emerged with a wrapped baby gift.

“I want to show them that I care…it’s not just showing them. I really do care.”

After a talk with his 19-year old granddaughter, Hall decided to invite younger defendants to afternoon sessions where they listen to their peers who have successfully completed the program, or discuss the reasons they started doing drugs.

“She said you wear a robe, you’re older, they’re not going to listen to you,” Hall recalled.

Despite Hall’s efforts, fewer Orange County defendants are enrolling in treatment than did when the program had full state funding. Of those who do get treatment, slightly fewer are finishing their programs than they did when the program was fully funded. But UCLA researcher Darren Urada cautioned that Prop 36 may be in worse shape than the completion rates suggest because treatment programs have been shortened. “Keep in mind that the lower the requirements are, the more people will complete,” Urada wrote in an email.

Prop 36 backer Daniel Abrahamson, legal director of the Drug Policy Alliance, said he and his colleagues erred when they wrote the initiative to require only five years worth of funding. He said he thought that lawmakers would continue to funnel money to the program if it produced results, but that was a major miscalculation.

“We felt the data should guide the funding and policy, and boy we made a political mistake there,” Abrahamson said.

In fact, UCLA researchers studied Prop 36 from 2000 to 2008 and reported that for every dollar spent on the program, nearly $2.50 was saved, mostly in reduced prison and jail costs. The researchers noted that Prop 36 graduates were less likely to be re-arrested, even up to six years after they completed treatment.

The state’s economic crash played a big part in Prop 36’s collapse, but so did law enforcement’s influence on the legislature, Abrahamson said. Judges, police and probation officers, and district attorneys opposed the measure when it was on the ballot.

Once the law was in effect, they wanted Prop 36 scofflaws jailed for short stints if they didn’t comply with their programs, as a condition of renewed funding. In 2005, the legislature passed SB 803, a bill that would allow so-called flash incarceration for recalcitrant Prop 36 clients, while funding the program for five more years.

But Abrahamson’s group went to court, arguing that such a reform subverted the will of the voters, who expressly voted to keep non-violent drug offenders out of jail, and was therefore unconstitutional.

Abrahamson prevailed, but it was a somewhat hollow win. The language of the initiative remains intact, but the funding impasse continues.

“We didn’t expect the entire economy to essentially take a dive such that the legislature would refuse to invest any money even when it was shown that investing money saved money.

“I don’t see any hope of convincing the legislature,” Abrahamson said.

But there is still a chance that the measure will get new life — thanks to federal health reform.

In 2014, when the Affordable Care Act takes full effect, many previously uninsured Prop 36 defendants will no longer have to rely on county programs for drug treatment because they’ll be covered by either Medi-Cal or private insurance. And, under the new law, insurers must offer mental health and substance abuse coverage that is comparable to medical and surgical coverage.