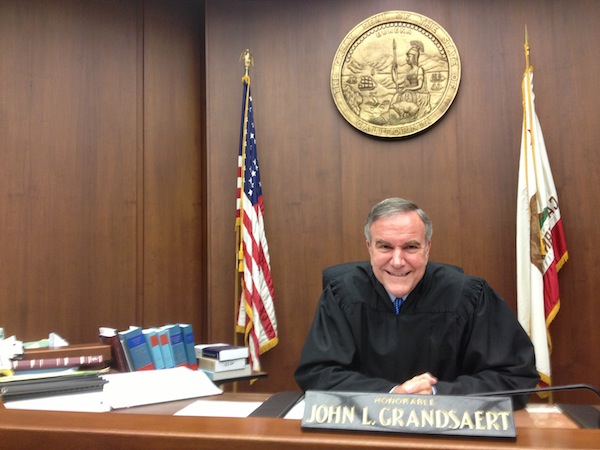 But what happens at Veteran’s Treatment Court is anything but typical. Modeled on drug treatment courts, this court provides extra support and treatment opportunities for military veterans.

San Mateo Judge John Grandsaert started Northern California’s newest veteran’s treatment court last July.
First, he had to convince the county that the court would not mean an additional hit to the county budget. In the past five years, California trial courts have lost nearly one billion dollars to budget cuts – an unprecedented amount. San Mateo Court has cut its total staff by 30 percent, even as caseloads increased after reforms to the state prison system.

“It’s not a good environment for starting new courts in light of the terrible budget squeeze that we’re under,” Grandsaert said.

But he was able to create the Veteran’s Treatment Court by limiting admission to the program and tapping into the resources of veteran support networks.

Judge Grandsaert sits behind a raised corner desk framed by the U.S. and California flags when court is in session. The state seal hangs above his head. He speaks in a soothing and encouraging tone to each veteran that comes before him—reminiscent of how a supportive father would speak to his son.

In fact, Grandsaert has a particular passion for veterans because his own son is in the Air Force and he spent 17 years in the Army reserve. He thinks vets deserve special treatment in the criminal justice system.

“Veterans have already sacrificed part of their life in service to their country,” Grandsaert said.

There are more than 23 million vets in the United States, according to the Veteran’s Administration. The VA also estimates that one third of the homeless population has served in the military. Vets aren’t more likely to be arrested, but those who are in the criminal justice system are more likely to have problems with addiction.

Vets in the San Mateo Court have already been convicted of a crime. They usually end up on Grandsaert’s radar because of a probation violation or referral. Defendants agree to be closely monitored during probation. In exchange, they get extra support and opportunities through the court. If they successfully complete the program, Grandsaert expunges their record and forgives their fines.

He estimates it will take vets 18 months to three years to go through the program. If they don’t progress with their treatment, they can be removed.

Halfway through the April proceedings, Clarence Young is called before Judge Grandsaert. He is a stout man with silver highlights in his beard, with his t-shirt tucked neatly into navy blue work-pants.

Grandsaert announces that he’s heard Young is a star at the shelter where he lives.

Young approaches the bench with a folder of paperwork. He shows Grandsaert a to-do list with twenty items, all of which have been checked off.

Grandsaert gives Young a Target gift card to reward his progress, and says he has advanced to the stage where he only has to report in every couple months.

Other courtroom participants applaud and smile.

About twenty vets, all men, are currently on the vet court docket. Most of them come before Judge Grandsaert once a month to report their progress. About half of the people who came before him in April were petitioning to be included in the court.

Grandsaert asks them each if they feel confident that they could complete the program.

Grandsaert has limited participation to San Mateo vets who can show that their substance abuse or mental health issues are related to their service. They also have to qualify for Veteran’s Administration benefits.

Grandsaert estimates that about half of the vets in his court are from the Vietnam era and half are from the Gulf wars. Combat service is not required to be eligible for vet court.

Grandsaert also created a volunteer mentor program where each defendant is paired with a mentor to keep tabs on them to better provide intensive support to the vets in his court and to keep the court sustainable.

He asked Derrick Felton, a team leader at the Peninsula Vet Center, to set up the program.

“It’s unpaid, it’s gonna be terribly annoying for these guys, they’re gonna be called at all hours of the day or night,” Grandsaert remembers saying.

But Felton jumped at the chance to organize it.

Tim Healy, a mentor at the nearby Veteran’s Treatment Court in Santa Clara County, has been one of three San Mateo mentors since the court started.

Healy understands what these guys are going through. “I am a two-strike convict,” he explained.

He was an air crewman in the Navy from 1986 to 1990. He developed a meth habit after his discharge, which led to his criminal offenses.

He was facing his third strike in Fresno County when he came before a sympathetic judge. He decided to have Healy evaluated for the Homeless Vet Rehab Program in Menlo Park.

“The judge told me out loud in court, ‘Mr. Healy, I’m going to do everything in my power to send you to this program’,” Healy said. “At that time I’d kind of given up.”

Healy was released from jail for 12 hours to go to Menlo Park for evaluation. Afterwards, he had to turn himself in.

“It was probably one of the hardest things I’ve ever done,” Healy said.

But he was approved to go into the treatment program instead of prison and began his road to recovery. He’s been sober for four years and works as a case manager with homeless veterans, most of who have criminal backgrounds.

“If I didn’t get a deferment, I would still be in prison,” Healy said.

He wanted to volunteer for the Veteran’s Treatment Court because he knew what a difference it can make when someone believes in you.

Healy points out that by joining the Veteran’s Treatment Court, vets are actually consenting to more restrictions.

“The majority of my clients are very compliant—they have that military background,” Healy said.

He checks in with everyone at least once a week but sometimes he gets a call at odd hours from someone in crisis.

Healy is also going to school to get his drug and alcohol counselor certification. He said it takes those skills as well as his personal experience with addiction to get through to these guys.

“If guys look like they’re slipping, I’ll call them on their garbage,” Healy said.

He feels proud when his mentees succeed and blames himself when someone ends up back in custody. He’s developed lasting friendships with some of them.

Judge Grandsaert was surprised at how grateful the vets who come through the court are for this opportunity.

“I think they’re surprised that their service has entitled them to this kind of support, attention and treatment,” Grandsaert said. “They are proud once again of their military service, because of what it is doing for them in this court.”