A Blueprint for Better Health 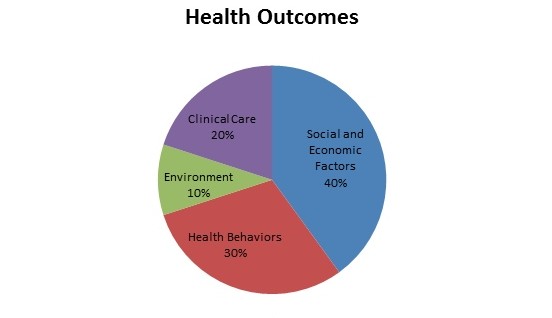 At 10:30 each workday morning, the employees at AnythingWeather in Palm Desert take a walk around the track at a park next door to the office. It’s a voluntary, paid 15-minute exercise break.

It doesn’t cost much – but on a large scale, getting more people to exercise could make a big difference. Studies show that regular exercise improves quality of life and can bring down healthcare costs by forestalling chronic problems like obesity, diabetes and heart disease.

The initiative recently released the Coachella Valley Blueprint for Action report, which was produced at a marathon brainstorming session in December by 125 local health-care experts. The blueprint aims to help people live longer, healthier lives – and it encompasses many factors, not just access to health care.

The blueprint uses the County Health Rankings Model, which was developed by the University of Wisconsin. The model estimates that a whopping 40 percent of people’s health is determined by social and economic factors: levels of education, employment and income, social support from family and friends, plus the safety of the community.

Thirty percent of people’s health is attributable to their behavior: smoking rates, diet and exercise, alcohol use and sexual activity.

The environment, such as the quality of the air and water – and the layout of your town or city – account for another 10 percent. Michael Ozur, from the Riverside County Department of Public Health, says towns should be built to encourage physical activity: “If you can’t walk anywhere, bicycle anywhere, if it’s impossible to get anywhere except by driving, it’s a problem.”

Only 20 percent of people’s health is linked to clinical care, which encompasses access to health care and the quality of care a patient receives.

“We as a society are ignoring the other 80 percent,” says Dr. Glen Grayman, who is a leader with the initiative and serves on the board of the Desert Healthcare District and the Health Assessment Resource Center. “Health is not synonymous with health care.”

The Affordable Healthcare Act addresses only a small part of the problem, Grayman says. “We’re spending roughly 97 percent of our (private and public) money on clinical care. And nearly 100 percent of the ACA. Ninety-seven percent of our money is going to something that constitutes 20 percent of our health.”

“We look at health very holistically,” says Ginny Ehrlich, Director of the Clinton Health Matters Initiative. “We are looking at a model that not only talks about health care, but also talks about prevention and lifestyle factors, plus social and economic factors.” The blueprint identifies nine lines of attack and defines five bold steps that need to be taken for each category. Then it establishes a five year benchmark for success on each score.

One of the more ambitious goals is to establish a healthcare district for the eastern half of the Coachella Valley. It would be similar to the Desert Healthcare District, which is based in the wealthier West Valley and owns Desert Regional Medical Center and JFK Memorial Hospital.

Another goal is to put a system in place for electronic health data to be exchanged between all types of medical facilities.

The blueprint also calls for a plan to finally do something to save the Salton Sea, which could blanket Palm Springs with polluted dust if the Sea is allowed to dry up.

Other ambitious goals include doubling the number of local high school graduates who go on to college. And the valley hopes to attract 12,000 new good-paying jobs.

The initiative has hired a full-time administrator, Tricia Gehrlein, to coordinate efforts in the Coachella Valley. “I need to sit down and prioritize and identify what is already happening,” Gerhlein says. The goal is work with and build existing plans and projects.

“It’s really a balance of building upon what’s already there but then taking it to the next level,” Ginny Ehrlich adds, “and setting the bar even higher.”

The initiative will be tracking progress on the bold steps identified in the blueprint. They will maintain a quarterly dashboard on their website and issue an annual report charting the efforts. Their progress will also be highlighted at the annual Clinton Health Matters Conference, which is held each January in La Quinta in conjunction with the Humana Challenge Golf Tournament.

A Blueprint for Better Health