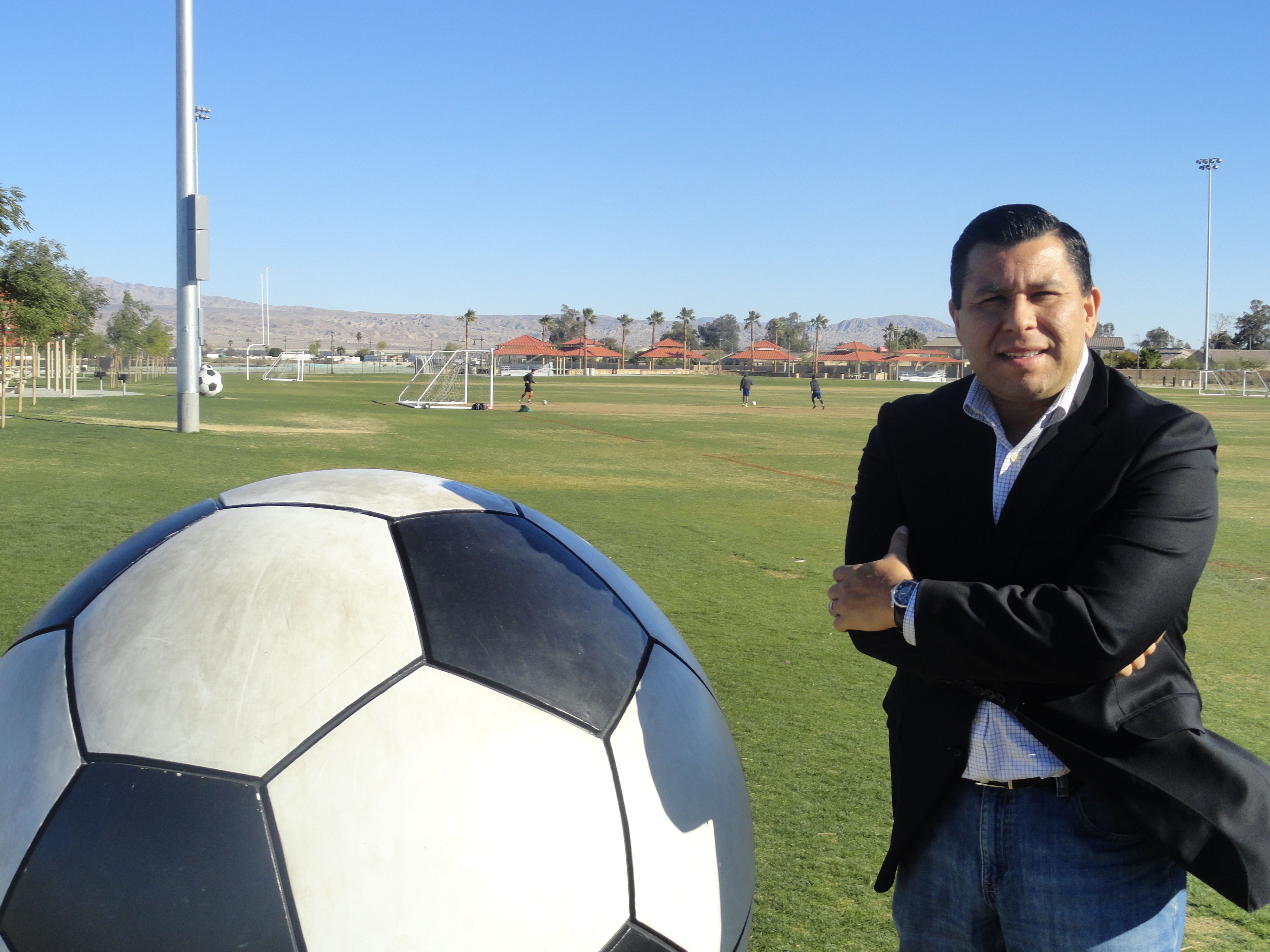 Nineteen-year-old Mark Guerrero of Coachella is practicing soccer with his friends at 3 pm on a blustery winter Tuesday – because on nights and weekends the fields are overflowing with school-age players and their families. There simply aren’t enough parks in Coachella. But Guerrero has been playing soccer for years and credits it with keeping him on the right track. “Without a place like this to play, I probably would have been out in the streets with the gangbangers,” he says. Instead, Guerrero finished high school and now works at a pet store.

Stories like that warm the heart of Coachella’s Mayor, Eduardo Garcia, who fought to build the brand-new Rancho Las Flores Soccer Park – the first park to be built in the city since 1974. “We are programming the DNA of the city to actually motivate people to live healthier because of the way the city is planned and the things that are available,” says Garcia, adding that ”bad planning can be more of a barrier to people being physically active.” Coachella is now spending $10 million to upgrade the city’s older parks.

Coachella added about 4,000 new homes over the past 20 years, but failed to force developers to set aside green space or make sure the gated communities have connectivity between the neighborhoods and local parks and schools. “The economy was moving fast, it was kind of build, build, build.” Garcia explains. “No one took a step back to try to think forward – to say what amenities are the people who live in these communities going to need?”

This summer, Coachella stands to become the first city in the Coachella Valley to adopt a new general plan that has been re-written with health issues in mind. It’s a preventative approach primarily designed to encourage more physical activity. That translates into more parks, sidewalks, hiking trails and bike lanes that are well-lit and safe. But the city is also trying novel approaches to bring in more medical facilities and attract more employers in general, so families can afford to take some leisure time and get some fresh air.

Garcia says that two years ago, the California Endowment announced they wanted to work with the Eastern Coachella Valley to bring down high rates of obesity and chronic disease like diabetes (the California Endowment is a fiscal sponsor of calhealthreport.org). They also helped fund CHIS (the California Health Information Survey), which issued its most recent report in 2011. Among other things, the report found that 35 percent of adults in the Eastern Coachella Valley are obese, compared to 21 percent statewide. More than a fifth of parents rated their kids’ health as only fair or poor.

The California Endowment gave the City of Coachella $300,000 to develop a health element in the general plan that will be implemented as the city expands. Coachella has 44,000 residents right now, but the population is expected to hit 200,000 in the next 20-30 years, based on available land and growth rates.

The city council recognized that people won’t get out and be active if they don’t feel safe, they used almost $6 million in redevelopment funds to renovate the downtown area, adding sidewalks and lighting. Almost immediately people began taking their families for a stroll in the evenings. A farmer’s market has popped up and is slowly attracting customers.

The CHIS survey also showed that only 36 percent of people in the Eastern Coachella Valley said their local parks are safe to use at night. any people say they are afraid to use the park after work. So the city views crime reduction efforts as a path to encourage better health through exercise. To that end, Coachella supports a number of recreational programs to engage teenagers and keep them away from a life of crime. They partnered with a nonprofit to sponsor an art program where kids paint murals. The city also funds the Lee Espinoza Coachella Valley Boxing Club to the tune of $30,000 a year. The Boxing Club is housed in a city-owned building and was expanded about 5 years ago to include a free fitness center. Coachella does not have a commercial gym, so about 150 people a day use the treadmills, bikes, weights and sauna at the fitness center.

The city also provides office space for the Latino Commission, which provides mental health counseling and drug rehabilitation programs at low cost and sometimes even no cost.

Coachella is also working to attract more health care providers by zoning new areas for medical offices. Last year, the city paid to put the utilities underground in certain areas in order to attract more businesses. The effort was successful; a new dialysis center opened its doors. It’s the only one in Coachella, so low-income patients no longer have to take several busses to get to their dialysis appointment.

In addition, the city has spent years and many millions to upgrade the municipal water system, so Coachella residents can enjoy clean water for decades to come.

Mayor Garcia plans to measure the city’s progress. The city will use baseline data from the most recent CHIS Survey and from the data collected by the Health Assessment Resource Center (HARC). HARC does an extensive health report card every three years, so the city will be able to chart resident’s health with regard to obesity, chronic disease, exercise, smoking and access to medical care.