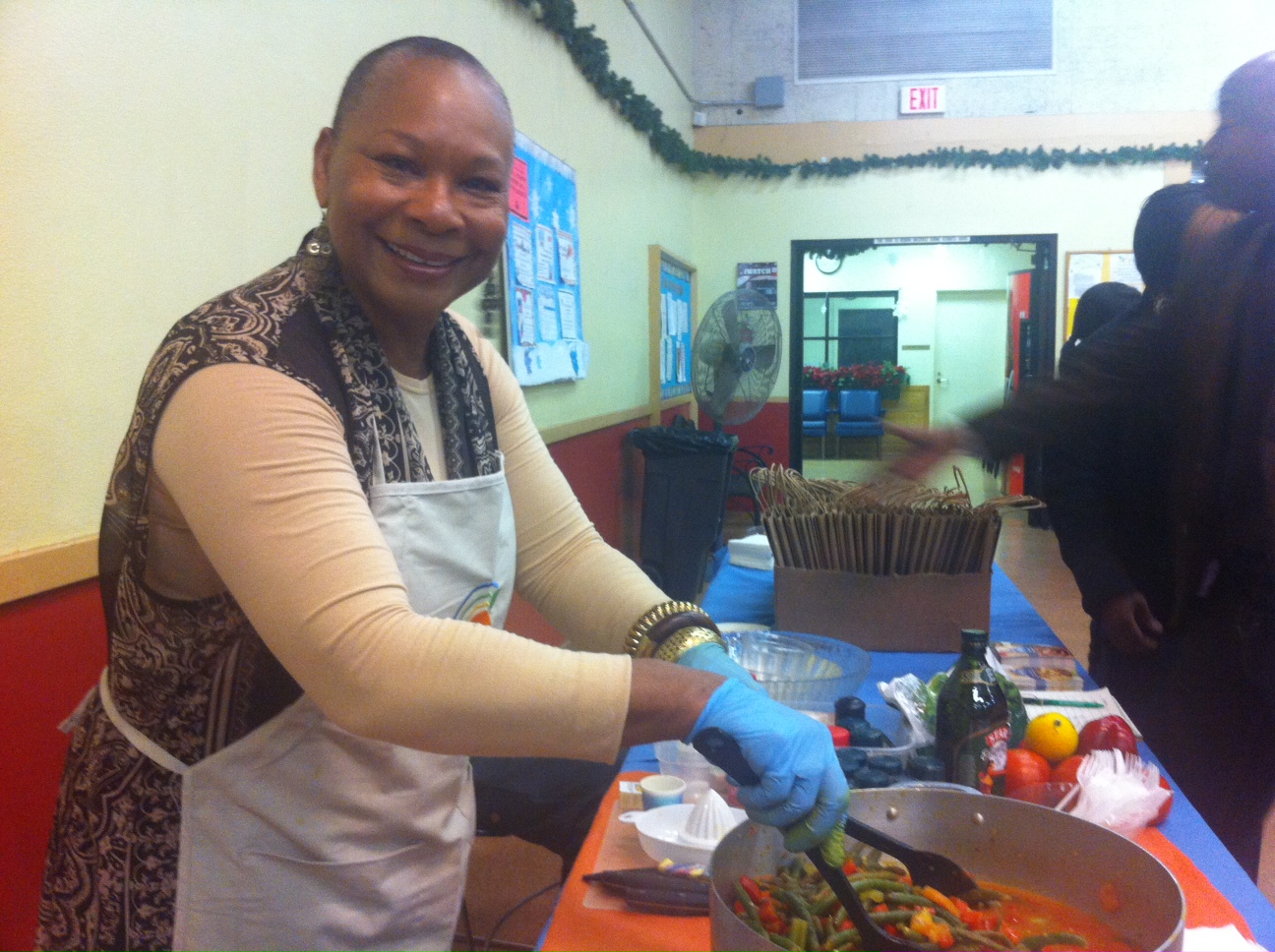 Soul food was on the menu one recent Saturday evening where more than a hundred people packed into a North Long Beach community center. They weren’t coming for dinner, but to watch a screening of a new documentary film “Soul Food Junkies” put on by the Coalition for a Healthy North Long Beach.

The movie starts with filmmaker Byron Hurt narrating the autobiographic journey as an image of his father appears on the screen: “Sweet potato pie. Mac and cheese, black-eyed peas. You name it, he loved it…like most boys, I wanted to be like my pops so I ate what he ate. I’d stack my plate with grits eggs, salt pork, on toast, typical Sunday breakfast…I never questioned what we were eating or how much. Back then, I just enjoyed my mother’s delicious food.”

Hurt’s father went from being young and fit, he said, to being nearly twice his size. He died at age 63 of pancreatic cancer.

The film investigates the upsides and downsides of the quintessential American cuisine, the history and social significance of soul food to black cultural identity, and its effect on African American health, good and bad. The movie recalled how slaves were given bare minimum to survive and so they often grew their own food and used the same hunting and fishing techniques as they had in Africa.

Throughout the decades, that survival food turned into a delicacy. Plenty of carbohydrates, oily, and sugary foods became a staple part of the African American diet. However, the movie shows that, eaten in moderation with a few healthy modifications, “soul food can be good to us and good for us.”

After the film, Laura Marin, who was in the audience, noted that Latino culture had a tradition of unhealthy cuisine as well. “I grew up in Tijuana and I remember my grandmother cooking pancakes with lard,” said Marin. “Growing up, we didn’t make the healthiest dishes, like enchiladas, where you put the tortillas in oil before you bake them.”

Marin said many of her friends in Long Beach are vegetarian and she pescatarian. “As you become more aware, you make healthier choices.”

The Long Beach Health Department says that African Americans have higher rates of type 2 diabetes compared to Asians and Whites, and are more obese. Michelle Fino, a dietician with the Long Beach Health Department, who answered the audience’s questions, along with Hurt, said the obesity epidemic more broadly is tied to environmental changes in society’s relation to food. The obesity epidemic began in the 1980s she said, when sugary beverages, frappacinos, and energy drinks began to trickle into the marketplace.

“It is very difficult to eat healthy when we have so much access,” she said. “What we know about people is when there is a lot of variety — like a buffet — they eat more. It’s very difficult for people to change their eating habits.”

Kathryn P. Sucher, a professor at San Jose State University in the Department of Food and Nutrition and the co-author of the best-selling book, Food and Culture, agrees.

Sucher, a recognized authority on how diet, health, and disease are affected by culture, said traditional diets of most cultures were generally healthier. For example, she said the diets of African American factory workers who migrated north before World War II ate, for the most part, traditional and healthy diets of boiled greens with ham hocks, beans, and cornbread. They were growing their own vegetables. Latino immigrants in the U.S. ate less meat, more starch and fruit, but consumed smaller portions than they do today, she said. Asian Americans had generally had healthy portions of vegetables and meats, but often used too much sodium.

“Every culture has good and bad things about the diet. Some have more good than bad,” said Sucher. “One message would be to try to stay with traditional with the food. Switching over to fast food culture is not a way to go.”

There are 5.8 times as many fast-food restaurants and convenience stores in Long Beach as there are supermarkets and produce vendors, according to the Long Beach health department.

Sithary Ly, a community health advocate at Families in Good Health at St. Mary Medical Center in Long Beach, said that fast food consumption isn’t as pervasive in the Cambodian population there. Though they suffer from hypertension and other ailments, obesity isn’t one of them, she said. Cambodian families in Long Beach are often low income and the family tends to cook at home the staple Cambodian diet of rice, grilled meat, and vegetables, like stir fry broccoli.

“You spend less and can feed more in the family instead of going to restaurant… You eat with them and make it a fun family thing and it becomes a habit.’’ Though Ly does say that she is seeing more obesity in children as they also move into consuming an American fast food diet, including hamburgers, hot dogs and soda. “But they don’t get huge because they eat the Cambodian food.”

Sucher said that of course, genetics plays a huge role in disease in cultures regardless of cuisine. African-American, Cambodian-Americans and Mexican-Americans are all susceptible to type 2 diabetes, and the cuisines of those communities are mostly 50 percent carbohydrates (corn, rice, etc.), which make treating the disease hard to treat.

In a population the size of Long Beach, the total costs of medical care and lost productivity associated with overweight and obesity alone is about $287 million per year.

That is a trend a tight knit group of government and community groups are trying to reverse.

And their message seems to be taking hold, at least among some audience members at the screening. Long after the film was over at a North Long Beach community center, the audience lingered around tables in the back of the room, sampling a stew of freshly cooked green beans and red peppers and picking up recipes to make healthy soul food dishes at home.