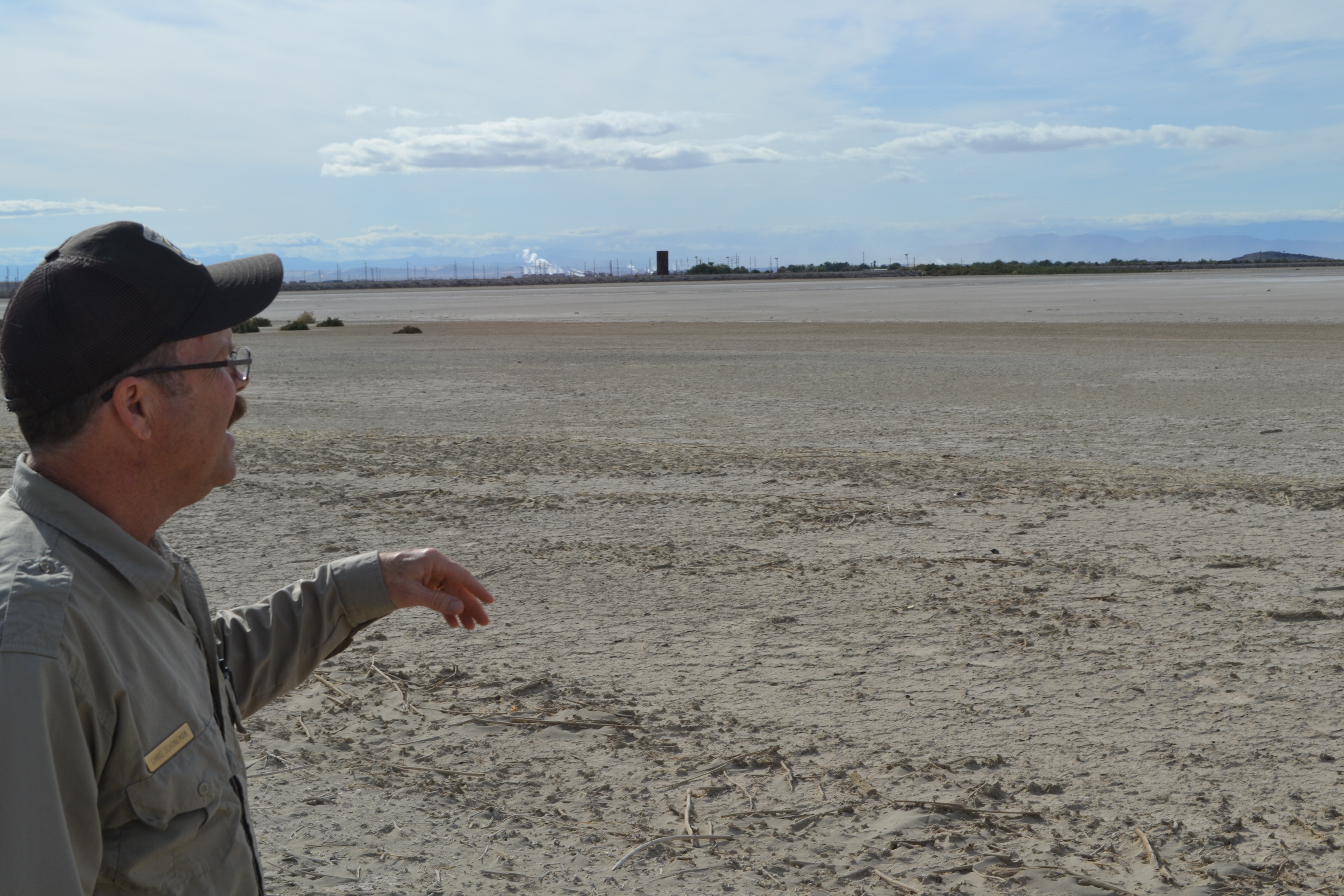 On a Monday morning in September, Tim Krantz, professor of environmental studies at the University of Redlands, awoke to a powerful odor.

Krantz dismissed the smell at first as a possible sewer leak. But the stench that engulfed the Inland Empire and spread as far as Los Angeles and Ventura counties was not the result of a massive sewage problem. It was a Salton Sea problem. The preceding evening, a storm emerged from the southeast, kicking up the sea. The wind churned the large body of water that straddles Imperial and Riverside counties, releasing hydrogen sulfide, a natural byproduct of decomposing organic material. The wind then carried the hydrogen sulfide, a rotten egg smell, west and north, forcing millions to hold their noses.

The Salton Sea is shrinking, making it shallower and more susceptible to events such as the Big Stink. But while the hydrogen sulfide can be dismissed as more of an inconvenience than a hazard, a greater threat may be looming.

“That’s chump change compared to the particulate matter situation that we’re facing,” Krantz, also a recognized authority on the Salton Sea, said of the Big Stink.

What if, instead of a bad smell, the wind whipped up fine, toxic dust from a dried, exposed Salton Sea lake bed, and carried that for miles?

The modern Salton Sea sits at the site of a pre-historic lake, the result of a 1905 engineering accident that flooded the Salton Sink with water from the Colorado River. The sea covers a surface area of approximately 376 square miles, but is only 51 feet at its deepest. It is fed from the Alamo and New rivers from the south and the Whitewater River from the north. Without an outflow, the sea possesses such a high salinity that only the hardiest fish survive.

Nowhere is the drop in sea level more evident than Red Hill Bay. This nearly 600 acre section on the southern end of the sea near the Sonny Bono Salton Sea National Wildlife Refuge Complex looks like a lunar landscape. Exposed sea bed whitened by salt and dried from exposure stretches for thousands of feet. An abandoned boat dock sits hundreds of feet from water. The ground is crusty on top, but soft immediately below the surface, like the hard outer shell of a crème brulee. Fine dust lies below the thin hard crust.

The Salton Sea’s slow death is simply the result of less water flowing its way. Conservation by Imperial Valley farmers has combined with a new water reclamation facility in Mexicali, just south of the border, which feeds the New River.

“It’s a two-edge sword,” Doug Barnum, the science coordinator for the United States Geological Survey’s Salton Sea Science Office, said. “In order to be efficient in one aspect, it does affect the functioning of the Salton Sea.”

However, the level of the Salton Sea will take a more serious hit in coming years. The 2003 Quantification Settlement Agreement allows for approximately 300,000 acre feet of water annually to be transferred from the Imperial Irrigation (IID) to the San Diego County Water Authority and the Coachella Valley Water District. The transfer begins to ramp up following 2017, and will result in even less runoff feeding the sea, thus exposing more lakebed.

What the seabed is made of is a question. The sediment is believed to be ultrafine, and to contain salt, minerals, selenium, arsenic, cadmium and legacy pesticides.

Imperial County already combats some of the worst air pollution in the state.

“Everything that we’ve done to reduce emissions from all of our manmade sources that we can control is overwhelmed by the Salton Sea,” said Brad Poiriez, air pollution control officer for the Imperial County Air Pollution Control District.

Many look at Owens Lake for clues to the future of the Salton Sea. After the Los Angeles Department of Water and Power diverted the water sources that fed Owens Lake in the early twentieth century, the lake soon dried up. Dust storms ensued. The result has been some of the worst air quality in the United States.

Bruce Wilcox, Imperial Irrigation District Environmental Project Manager, cautions that Owens Lake is not an exact guide to the future of the Salton Sea. For one, the Colorado Desert’s more extreme heat helps to keep the dust encased, and it is much windier at Owens Lake.

Another unknown is what form will the exposed playa take once exposed. Barnum of the USGS said he’s unsure if additional exposed playa will be fine particulate matter or more like a hard parking lot.

Plans to mitigate the impact of an exposed Salton Sea lakebed range in scope. The IID operates six monitors to measure air pollutants. The monitors have been active for less than two years and the results are inconclusive.

Wilcox said that the IID has a number of options to control wind exposure. These include barriers to interrupt the wind’s fetch, including vegetation, hay bales and fencing.

There are more ambitious, and costly, plans on the table. These include the Salton Sea Ecosystem Restoration Preferred Alternative, which allows for habitat, brine pools and a significant portion of the middle part of the sea exposed; and a plan promoted by Krantz and the Salton Sea Authority that calls for dividing the sea in half. The estimated cost of the former is $8.9 billion, the latter up to $5 billion.

Chris Schoneman of the United States Fish & Wildlife Service and project leader at the Sonny Bono Salton Sea National Wildlife Refuge is working on securing funding for a project at the Red Hill Bay area. The idea is to cover the area with just a few inches of water from the Salton Sea. The result will be twofold: playa that is wet does not turn into blowing dust; and the area can return to valuable wildlife habitat for migratory birds.

“We’re developing the plan and trying to get funds raised to build the project,” Schoneman said.

Barnum and Schoneman believe that smaller, manageable steps are a way to show progress.

A final unknown surrounding a receding Salton Sea is the potential for renewable energy sources. There are already geothermal plants operating near the south end of the sea, and exposed playa presents the possibility of more access. Krantz also proposes possible solar projects, extracting lithium from geothermal brine, salinity gradient solar ponds, producing biodiesel from algae and tapping into hydroelectric power through a special outflow system. None of these ideas have been studied.

Some interviewed for this story believe that the Big Stink of September did more than just inconvenience millions of Southern Californians. It alerted them to the fact there’s a pending public health disaster that’s closer than they realized.

“People want to say the Salton Sea is out in the middle of the desert, it’s not going to affect us,” Barnum said. “That’s probably not true.”

Everyone interviewed also agreed something needs to be done.