Soiled clothes no longer a setback for Santa Ana’s needy 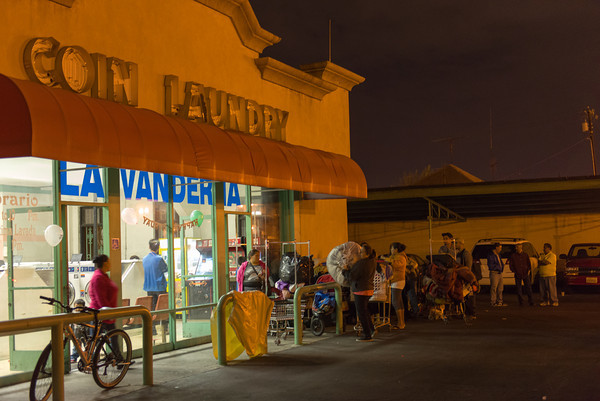 Amidst a mostly unpredictable day to day existence, many of Santa Ana’s homeless and immigrant poor have come to count on at least one thing: the chance to get their clothes and other belongings laundered once a month.

Starting at 7:30 p.m. on the third Thursday of each month, up to several dozen of them can be seen outside of the Santa Ana Laundromat, patiently perched next to their carts as they wait their turn to get inside. Assembled inside is the entirely volunteer staff orchestrating this once a month event known as Laundry Love Santa Ana.

Laundry Love helps the homeless and poor clear the hurdles of laundering their clothes, providing money, access to washing machines and necessities including detergent. The volunteers coordinate based on the number of people in line, providing coins, detergent, dryer sheets and helping hands. Up to 200 loads of laundry have been done on some nights.

The project is adopted at the local level by interested parties partnering with local laundromats. With team leader Scott Overpeck at the helm, Laundry Love Santa Ana is currently in its third year. The catalyst for Laundry Love was the basic tenet that laundry is a universal need.

“No matter who we are, we all need to do our laundry,” said Overpeck, who spends his time outside of Laundry Love running his own business, Santa Ana-based consulting group Intersection Creative Strategies. There, he helps non-profits manage their difficulties with fundraising, program development, marketing and strategic planning problems. His experience working with those serving various disenfranchised groups has given him a unique perspective on the problems of the homeless, he said.

He explains, for example, that the general perception is that food is the foremost unmet need affecting the homeless and poor in Santa Ana, but his observations during time out in the community among them has shown him otherwise.

“As a homeless person, you can have nine meals on a Sunday on Civic Center Drive,” Overpeck said.

But laundry is among the needs that typically aren’t met, he said.

Among those coming to Laundry Love Santa Ana for several months is Marta Hernandez. Only months ago, she was a supervisor at nutritional product manufacturer Herbalife. Following a layoff, she has since gone from having her own apartment to being homeless for the past two months.

“I left Cuba 17 years ago to find a better life, I never thought one day I would be homeless,” Hernandez says. Still, she is energetic. The look in her eyes is not one of despair, but rather that of focus as she rapidly moves her plastic bag-filled cart back and forth between the washers and dryers.

With one eye on the machines, she emphasizes that rather than feeling sorry for herself, she is grateful for the help Laundry Love provides because it enables her to conquer the bigger goals she has sketched out for her future.

“I am studying Math and English at Santa Ana College to get back on my feet,” Hernandez says optimistically, adding that without the few dollars in coins and detergent provided by Laundry Love, having clean clothes to go to school would be out of the question soon if not immediately.

Like Hernandez, Mariela Gonzales was also laid off. With her two toddler and infant children in tow, she also is there for the much needed assistance in getting her family’s clothes washed.

The former hotel employee says that without work, the cost of laundry stretches her budget too thin at the moment.

Overpeck sees much of the value of Laundry Love nights as its role in creating community.

“We’re not here to be saviors, that’s not the concept,” Overpeck said, highlighting that everybody is vulnerable to what people like Hernandez and Gonzales are experiencing right now.

Still, there are some for whom Laundry Love is nothing less than being saved. Another visitor who wished to remain anonymous has been homeless off and on for 20 years as a result of drug addictions. She says that Laundry Love is essential to her hygiene and health.

“This helps me keep a clean living environment,” she says of being able to wash her clothing and blankets. “It helps keep the germs and bed bugs off of my body. And I don’t get those horrible spider bites.”

She is currently looking for work as well. If not for Laundry Love, she says, her appearance might possibly cost her a chance at a job also.

“I’d be looking for the closest five gallon bucket. You do what you got to do. But this is a heck of a lot better,” she said.

What makes Laundry Love Santa Ana unique is that the help given to the community is packaged as something more akin to a party. Overpeck and team leaders have provided Hernandez and others something more than the financial assistance and appliances: an atmosphere that lets them get away from their problems for that hour or two that they are there. Bringing in activities for the kids accompanying their parents, juke boxes and dance-offs are just a few things designed to help pass the time while people wait for their clothes. And it makes a noticeable difference.

“There are some people we see for a long time. One of our first success stories was a woman who used to be bitter and angry, but after a year of hanging out at our event, she was a nicer person to be around, and her daughter even let her back in, which was great,” Overpeck said.

Looking at these peoples’ lives from a bird’s-eye view, Overpeck recognizes those coming to the laundromat suffer voids beyond a lack of clean clothes. These include lack of affordable housing, jobs, community, entertainment and leisure time.

“My family has gone through this, I grew up poor and had to go to laundromats most of my life,” Overpeck said. “I know what it’s like having to go without.”

Soiled clothes no longer a setback for Santa Ana’s needy