Planting an urban forest in Richmond 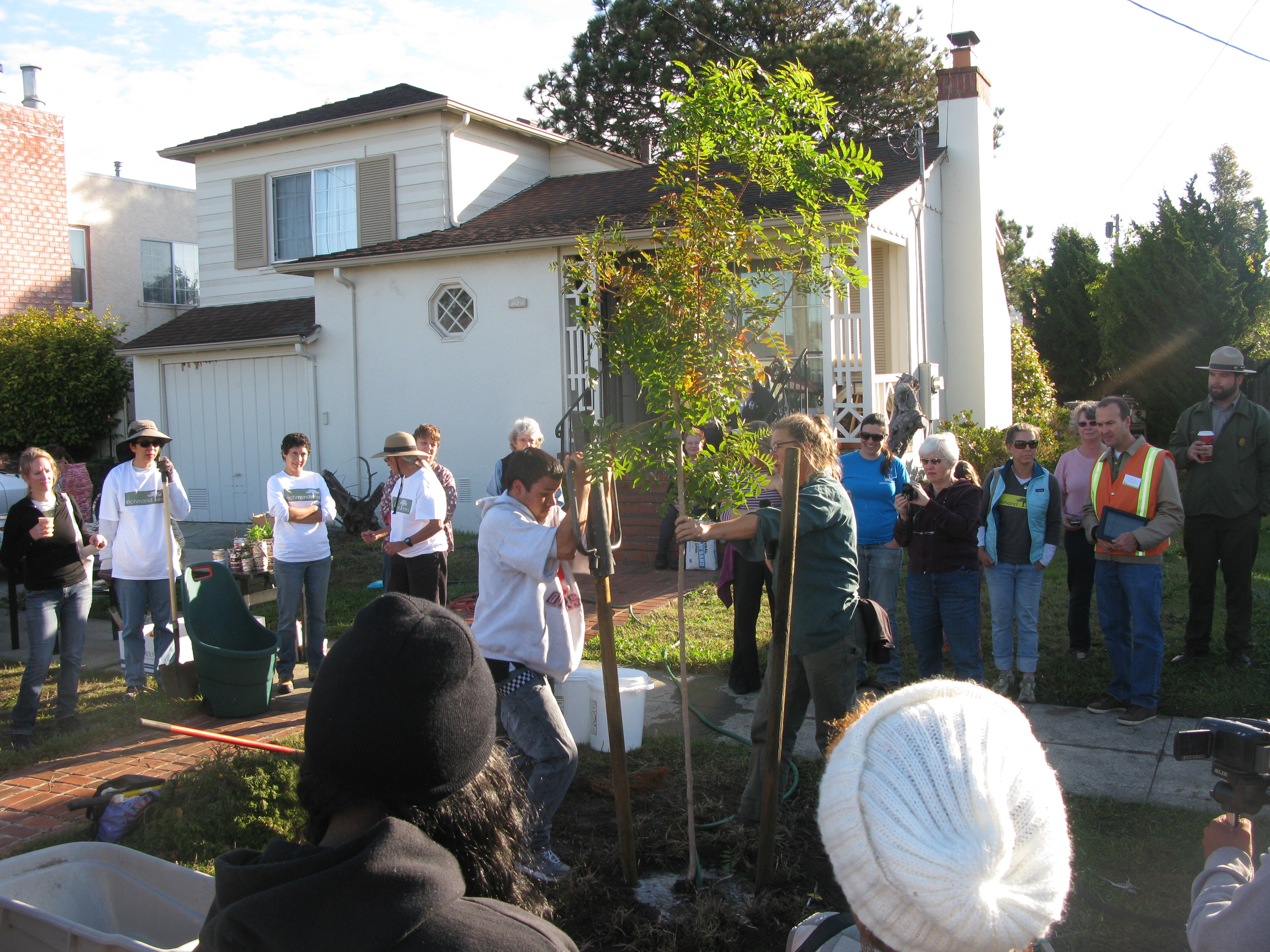 On a recent Saturday morning, the 600 block of 35th street in Richmond was closed to traffic. A small crowd gathered in front of number 634. The knot of people was mostly residents from the surrounding neighborhood, the North & East, in central Richmond, and an assortment of teenage volunteers from various community groups.

The crowd’s focus was directed toward Richmond’s city gardener, Lisa Graves, who was working on behalf of the organization Richmond Trees, and the Chinese Pistache tree she was planting in the thin band of grass that separated the road from the sidewalk.

Since Richmond Trees formed a year ago they have canvassed, educated, fundraised and physically planted more than 150 trees. They are on track to do even more this year. Richmond has roughly 28,000 trees that cover an estimated 10 percent of the streets and neighborhoods in a canopy. That’s low compared to other Bay Area cities. For improving the canopy cover, 40 percent is considered optimal, and that level has benefits ranging from better air quality, reduced crime, increased property values and more community engagement.

Graves explained to the watchful audience that you couldn’t just pull the tree, which was taller than she was, out of the pot and stick it in the ground. She demonstrated the steps that will help these trees survive the critical first few years in a harsh city environment: loosen the root ball, make sure the elevation was just right to ensure proper drainage, and stake the tree properly for good support.

The group of about 65 new urban foresters was then let loose in the neighborhood, under the guidance of a team leader, a member of the group Richmond Trees, to repeat the careful process and plant 28 more trees.

“This started because I wanted to plant some street trees in front of my house,” says Teri Katz, one of the founders and the coordinator of Richmond Trees. “But the city told me the [Adopt-a-Tree] program was on hold, so I thought I’ll volunteer. I really had no idea it would morph into what it has become today.” It helped that the neighborhood already had engaged residents and a chatty Yahoo Group. When checking the listserv one day, Katz noticed that other neighbors were interested in organizing a tree plantings.

Soon after, on a Sunday afternoon, Katz invited some interested neighbors over to her house. She also invited another of the city’s gardeners to explain Richmond’s Adopt-a-Tree program and the group took a walk around the neighborhood to identify common street tree species and some of the problems associated with urban trees, such as planting the wrong size tree in the wrong locations, like too close to sidewalks or under power lines.

Katz and the other volunteers started to canvas their blocks and talked to people about the benefits of trees. Jan Mignone, the president of the North & East neighborhood council, longtime resident, and another early member of Richmond Trees remembers, years ago, when the neighborhood did have some big trees. “I lived on a street that had a lot of trees, but they got cut down because they were the wrong kind of trees. We had a lot of flowering plums and magnolia, which are not particularly good street trees,” she says. Over the years problematic trees were removed and not replaced. The pattern continued in other parts of the city, until sections of Richmond started resembling a clear-cut capped in concrete, with no shade or dappled light coming through leaves, and almost no canopy.

That’s why Richmond trees frequently frames the benefits of more street trees in terms of the ecological services trees provide. Besides exchanging climate change inducing greenhouse gasses for oxygen, trees also filter out other human health damaging pollutants like particulates, volatile organic compounds and nitrogen oxides, all of which are products of heavy industrialization. Trees work like other types of sponges, the closer they are to the source of the pollution, the more effective they are at filtering.

Due to the legacy of heaved sidewalks, broken sewer pipes, and messy leaf litter of the city’s previous plantings, Richmond Trees volunteers often need to make a strong case for the benefits of trees when they go door to door looking for new adopters. “It’s hard canvassing,” says Kaci Smith, another North & East resident and tree planter. “We go through a whole list of benefits. At first people are usually pretty closed off, but after you get past that and they hear that we are a neighbor, then people are pretty receptive.”

Besides the environmental aspects of cleaner air and softening the sights and sounds of an urban environment, trees also have public health benefits like slowing traffic, encouraging residents to spend more time outdoors, and reducing crime. A 2012 study from Baltimore, another city with a large urban forest planting effort, found that a 10 percent increase in canopy cover can reduce crime by 12 percent. The study controlled for the fact that most pre-existing tree lined streets are in more affluent neighborhoods with lower crime rates to begin with. In Richmond, police chief Chris Magnus, who lives in the North & East is a supporter of Richmond Trees, and even planted a tree in his own yard.

If residents are interested, they pick from a list of city approved street trees and then one of the city’s arborists will visit the site and check for utility lines above and below, and either sign off on the selection as appropriate for the spot, or recommend a different species. Then, in order to officially adopt a tree, the adopters have to agree to water the tree regularly until it can fend for itself. “The single biggest challenge we face is getting water to the forest for the first two years,” says Chris Chamberlain, Richmond’s Parks and Landscaping Superintendent.

The city’s Adopt-a-Tree program is a three or four years old, Chamberlain says, but is only in the past year, with the involvement of Richmond Trees, that it has really started to flourish. In addition to the legwork of finding tree adopters, Richmond Trees has also raised money to buy saplings. Last year they received grants from PG&E, CAL FIRE, and Veolia Water to help purchase trees. “We had the equipment to plant trees,” Chamberlain says about the city’s Adopt-a-Tree program, “we just didn’t have the people or resources.”

Richmond Trees recently received a $10,000 grant from the Sacramento-based California ReLeaf, an urban forest advocacy group, to publish more educational materials, and to buy additional trees and a concrete saw to open additional places for planting. As part of the grant they have to plant 100 trees by March 2013.

Now a full-fledged organization capable of mobilizing large numbers of planters and partnering with other local environmental groups such as Groundwork Richmond and the Watershed Project, Richmond Trees is trying export their model of community engagement and education to other neighborhoods in Richmond, like the Iron Triangle, Coronado and Santa Fe. “We are all collaborating on materials and sharing lessons learned and comparing notes because there is a lot of effort in Richmond going to improving the neighborhood tree canopy,” says Nancy Baer, the board chair for Richmond Groundwork. “Within a few years, I think we will have a pretty substantial tree growing effort throughout Richmond.”

Planting an urban forest in Richmond