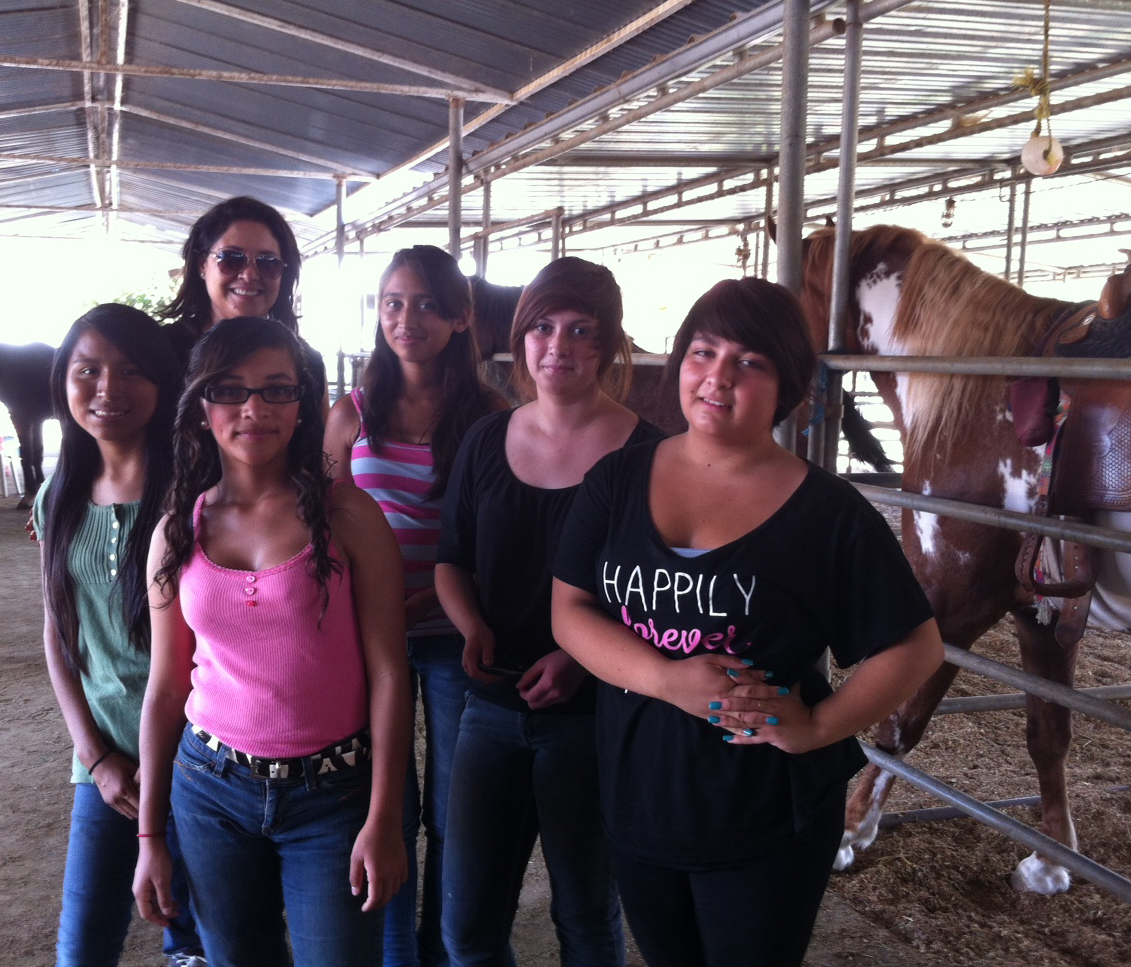 Standing in the dusty stables of the Los Angeles Equestrian Center on a sweltering day recently, a half dozen teenage girls had just finished their horseback ride and were admiring the mighty animals munching on hay in their metal stalls. This wasn’t a traditional equestrian outing. It was to celebrate the end of a self-esteem program, Just for Us. The 8-week workshop, run by Helpline Youth Counseling, is designed for 13-to 17-year-old teens whose home environment, low income, delinquency or other factors put them at risk for dropping out of school, getting pregnant, or committing a crime.

“Today’s field trip is so that they’ll have a new experience so they can build their self-esteem,” Julie Ayala, a counselor at HYC, who has been leading these workshops for 16 years. “Girls can’t normally control huge animals. It’s intimidating. But once they bring it back, they are so proud of themselves.”

HYC is the largest youth services provider in Southeast Los Angeles County. In the last year, the agency provided comprehensive educational, case management, counseling, skill building, and treatment services — mostly through schools —to more than 6,700 children, youth, and adults in communities from Long Beach to Whittier. HYC’s Just for Us workshops have served more than 5,000 girls over seven years. The teens are referred by the Los Angeles County Probation Department, and through their schools, to attend the weekly class. The detailed curriculum includes many topics that the high school girls from Bellflower are curious or confused about, but are often too embarrassed to broach with their parents or teachers.

The first day’s workshop (they are held weekly over two months) is focused on self-awareness and having “a unique you.” Another offers lessons on a basic tactic to improve self-esteem: positive self-talk. The girls have long discussions about their physical development and puberty. The group is also given the task of naming what they value, what their short and long-term goals are, and how to overcome obstacles in order to reach them. Midway through the program, the group turns to the subject of relationships and how they affect one’s life, and how to develop strategies for making healthy and informed decisions. Some of the girls said one of that the most interesting parts of the workshops were when they discussed the consequences of substance use.

“Most of my family members are drug addicts or in recovery,” said Veronica Rodriguez, 15, adding that one of her relatives served 8 years in prison.

“My cousins gave me advice and they scared me mentally…they said there are three ways to go: dead, mental hospital, or jail,” Veronica said. She added that it helped when Ayala, the workshop leader and counselor, talked with the group about anger.

“She gave me advice about anger management and when I’m angry, when people are too controlling, to wait until it’s over and you are ready to talk, or maybe distract yourself or listen to music,” she said. “I’m learning how to calm down.”

For 17-year-old Mayra Alvarez, the section “Let’s Talk about Sex” was helpful to learn about sexually transmitted diseases. “This helps more than school. I’m more embarrassed to talk in class, so here I can ask more questions.” She said when she learned from Ayala about AIDS and sexually transmitted diseases, “I got scared and thought I’d like to wait [to have sex] instead of getting something that won’t go away.”

Another thing that Just for Us does is support mother-daughter relationships. If girls don’t have a many women in their lives or live with their fathers, HYC sometimes organizes mother-daughter teas or lunches to encourage the mothers to be a support system for girls.

Karen Wyatt-Coleman, HYC’s director of community services who oversees the Just for Us program, said when she was younger, a counselor helped her transform her life. She recounts how her alcoholic father abused her mother and that she had herself been in a gang as a teenager.

“I was an at-risk youth at one point and I had a counselor and I was able to grab onto what they were offering and scored,” she said, “We are not going to be able to save everybody in an 8-week program, but we do the best we can.” When they leave the workshop, the teenagers still have many services at their disposal. HYC makes referrals to school-based services, including youth service bureaus, tutoring, and teen pregnancy prevention. At the end, each girl gets a certificate of completion, a tangible record of her accomplishment.

As she escorted the girls from the riding stables to a pizza place for a celebratory lunch, Ayala expects the best for this group. “I hope the girls see that there’s a whole world waiting for them.”