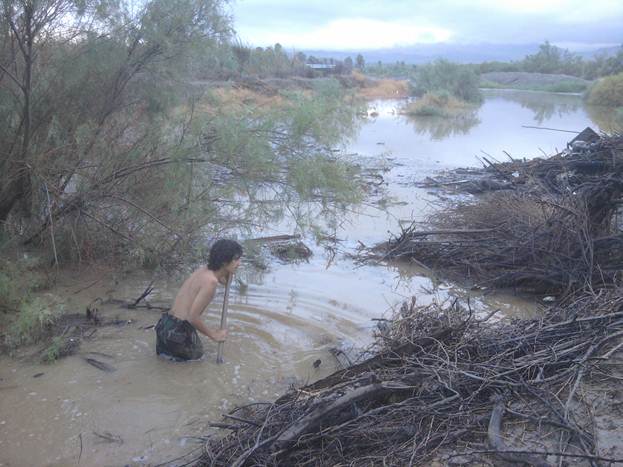 Call it the tale of two trailer parks. Both are in Thermal, California, a rural area 30 miles east of Palm Springs. Both were hit by a freak fall storm that dropped more rain in one night than they normally get in an entire year. One park, Duroville, was devastated and had to be evacuated for a week. The other park, Saint Anthony’s, suffered moderate damage.

It was a classic flash flood. A storm stalled for six hours on September 11, dropping 5.5 inches of rain on an area that normally sees about 3-4 inches of rain per year.

Duroville is a trailer park notorious for its third-world conditions: 2,000 people crammed into 194 dilapidated trailers on a 40 acre site. This time of year, the population drops to about 1,200, because most of the men leave to work the harvest in Northern California. Duroville’s “roads” are mostly dirt paths, with no gutters and no sewers. Human waste flows from the trailers through plastic pipes into a collection pond and then into seven open lagoons nearby. The electrical wiring is substandard; fires are common. Water comes from two wells. Most of the people who live there are poor undocumented farm workers and their families – people who can’t afford to move anywhere else.

Duroville was built in 2000 by Harvey Duro, a member of the Torres Martinez Indian tribe. Duro neglected the unpermitted park, but local officials had a hard time regulating it because it is on tribal land. By 2009, conditions got so bad that a federal district court judge ordered the place shut down. However, the judge didn’t want to throw 2,000 people into the street, so he appointed a receiver, Tom Flynn, to manage the park until all the residents could find somewhere else to live. Affordable rental properties are in short supply; so the park remains open, and residents make due.

Flynn recalls the drama of the flood. “We had about two feet of moving water on the south side of the park that was swirling and had isolated about 150 of the mobile homes here,” he said. “The agricultural canal on the northern perimeter of the park had overflowed before dawn and water was accumulating on the north side of the property. Both our water wells were submerged and therefore not functioning.”

“All we could really do is watch the water to see if it would keep coming, because to the west of here there are many miles of open terrain,” he continued. “The water was just cascading downhill because here everything heads toward the Salton Basin. And because of the illegal dump next door, it was all being pushed this direction. The dump’s been closed for years by federal court order. But it has a 14-foot earthen berm around it, meaning that the water couldn’t go through it. So the water was being pushed here.”

Susana Barrigan, 16, was shocked by the deluge. “It rained the whole night and day almost,” she said. “It didn’t stop. The water just kept going up and up till it reached almost three feet. The water came into the trailer and everything was getting wet.”

She lives with six other people, including her three-year-old brother. “It was scary. I was worried about the electricity going out, since it would get too hot inside,” she said. “We were worried the baby would get sick.”

Susana said she tried to sweep the water out with a broom, to no avail. “I was trapped. There was a lot of water and I couldn’t get past it. I was afraid the level of the water would get higher, that it would move the trailer.”

Jonathan Acahoa Fernandez, 13, said he was scared when the waters kept rising – all the way to the door of his trailer, which is on jacks, 3.5 feet off the ground. His mother Felicita Acahoa said, in Spanish, “I have been here ten years and I have never seen anything like this. The water has never been so high. It even came into the kitchen and living room.”

“We couldn’t go anywhere,” she continued. “The streets were closed. I was scared that we couldn’t get out of here. We had to evacuate for an entire week because we needed food, a place to sleep, and a place to take showers. The kids weren’t able to go to school for a day because of the flooded roads.”

“We had people who were literally stuck in their trailers,” Flynn recalled. The looks on people’s faces, he said, reminded him of the looks of desperation seen on the faces of Hurricane Katrina victims.

Right after the flood, residents reported seeing a big increase in rats at Duroville. Many think the flood disturbed the rodents’ nests in the illegal dump next door. At least one dog drowned but wasn’t discovered for a week, until the stench drew people’s attention. Animal control handled the cleanup.

Even a week after the flood, Duroville still had a lot of standing water. Some puddles were 40 and 50 yards long. Now the families are fighting mold, and asthma.

In addition, the jacks holding up the trailers are sinking. “Most of the trailers had water surrounding them for several days,” Tom Flynn explains. “As the water receded you now have uneven ground where it used to be fairly level. The jacks are gonna have different heights. The floors are shifting because the jacks that hold up the units are settling into new places as the mud solidifies and becomes uneven dirt.”

Fortunately, the water did not dislodge the small plastic pipes that bring water into the trailers and carry waste out.

Jose Arballo, Public Information Specialist with the Riverside County Department of Public Health, said things could have been much worse.

“There are portions of the sewage ponds that overflowed,” he said. “There was the possibility that there could be raw sewage seeping directly through the park. And then the pumps in the water system stopped working.” Dr. Cameron Kaiser, the area’s public health officer, decided to recommend bottled water and made a no contact recommendation. “We had to assume the water was contaminated until we got the results back. We had to wait for the pump to be fixed.”

County Public Health officials shut down the park for a week and opened up a shelter at a local high school. The Red Cross and Clinicas de Salud Del Pueblo contributed nurses to staff the shelter. Clinicas also sent a team of “promotoras” to assess what kind of medical and social services help people needed. The water district brought in a truck to dispense water for people to wash dishes.

Public Health gave the all clear for people to return to Duroville once two sets of tests showed that the water is not contaminated.

Everyone returned, and now Duroville receiver Tom Flynn and two local nuns are doing their best to help families recover.

The closest medical clinic, called Clinicas de Salud del Pueblo, has treated a number of people for respiratory and stomach issues – problems that may have come from living near all the muck. “We saw a handful of people who told us they had brushed their teeth with contaminated water and then got diarrhea and other gastrointestinal symptoms,” Claudia Galvez, from Clinicas, said. “We also saw a rise in mosquito bites after the flood.”

“We are getting some sporadic reports of illnesses, such as minor fevers, diarrhea,” Arballo at Public Health said. “However, there is no indication at this point that they are related to anything like contact with bad water or something else related to the incident.”

Arballo was struck by how much the community helped itself. “They had to depend on themselves for the first few hours,” he said. “They are very resilient. They had their own methods of communication, community groups. In some cases they really rose to the occasion.”

There is some hope on the horizon that conditions will improve for families who live in Duroville. County Supervisor John Benoit recently announced that a replacement trailer park called Mountain View, specifically built to take in the residents of Duroville, may open in mid-November with 41 trailers. And the state just gave the county the thumbs-up to spend $9.9 million in redevelopment funds to purchase and install another 140 trailers. As a result, Duroville may finally empty out sometime in 2013.

”This place was built as a slum 12 years ago with substandard materials and parts,” Flynn said. “Most of the trailers are 35 to 55 years old. And it’s been falling apart for years.“

A tale of two trailer parks

Contrast that situation with that at Saint Anthony’s Trailer Park a few miles away. There, the 98-unit park is actually owned by a community group made up of park residents called Pueblo Unido. During the flood, as waters were rising, half a dozen men and ten teenage boys got out their shovels and picks, and dug a two by two foot ditch down the middle of the dirt roads that run through the park. The trenches diverted the deluge to a low-lying area in the desert nearby.

“We had a lot of storm damage,” says Rodolfo Pinon, a community organizer for Pueblo Unido. “It was going to hit the electrical panels. It was only about an inch away.”

Victor Gonzalez, 19, is a college student who helped save the trailer park he calls home. “We came very close to almost losing the power here,” Gonzales said. “But we got there just in time to pump out the water. We needed to come together and make a ditch so the water could flow out into other areas. If we hadn’t been able to divert that water into that ditch it would have brought out the excrement that exists in these lagoons right next to the park. “

Within a week, Pueblo Unido paid for a construction crew with a small bulldozer to dig a ten foot trench and then lay pipe to form a makeshift flood control system – to protect the park in the future.

“We’re using the money that we get from the rents,” Pinon said. “All the money is being used to improve the community. The community was very involved so we didn’t have damage like they did in Duroville. Some homes leaked and the water was up into some of the homes but we were able to save the place.”

Pinon argues that the county needs to step up and find the tens of millions of dollars it would take to bring electrical, water and sewer to these rural communities, regardless of the fact that most of the residents are undocumented.

The eastern Coachella Valley now has about 400 unpermitted mobile home parks – and most rely on individual wells, some of which contain naturally occurring arsenic, Pinon said. “Saint Anthony’s developed because of the lack of housing. The families bought 10 acres, they put a couple of homes out here, and it eventually it turned into a community. “

“Most of the families who live here are farmworkers. They have no benefits. They have no insurance. They contribute to the local economy,” he continued. “They produce 430 million dollars a year of produce here.”