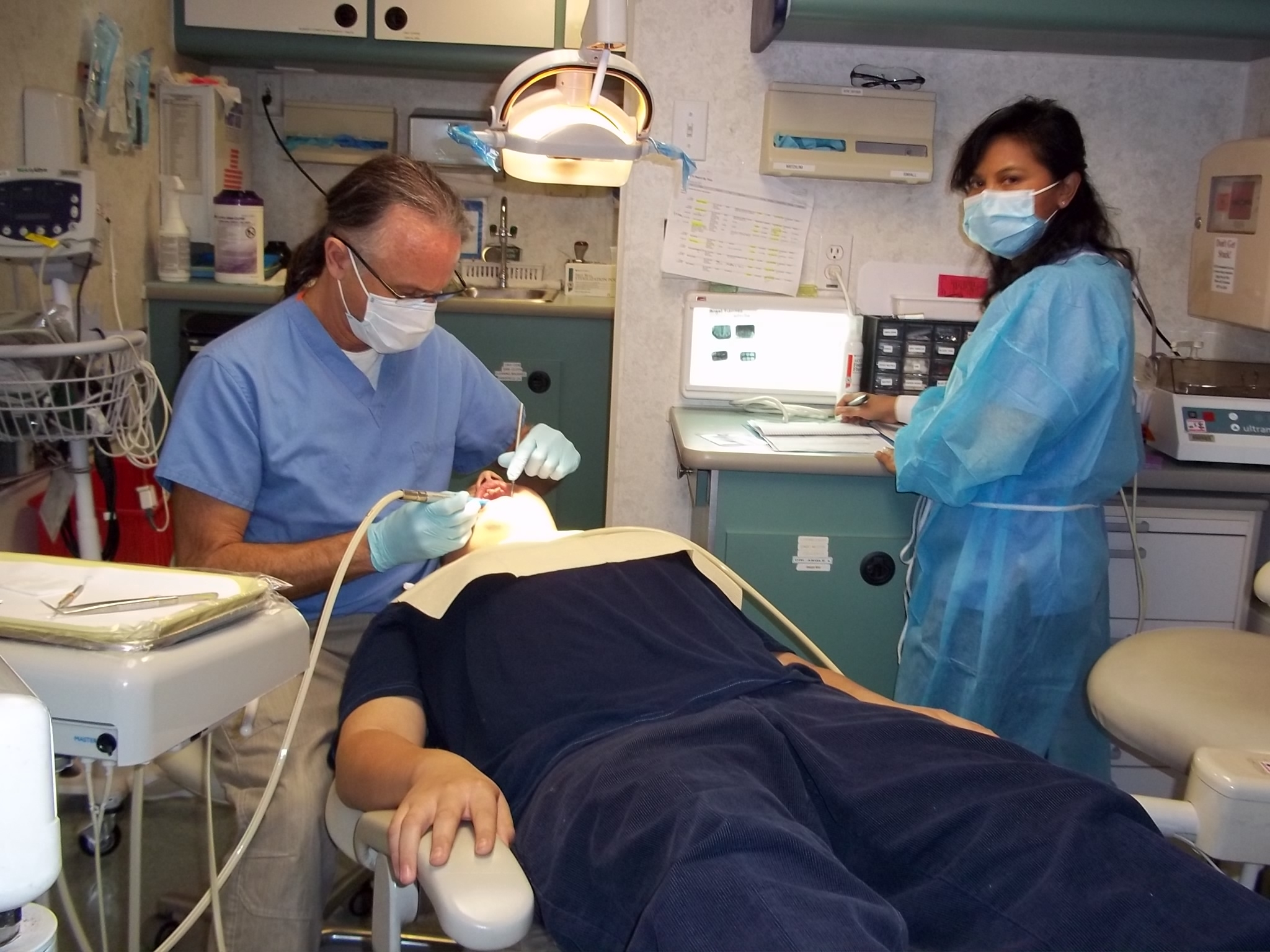 Dr. Jeffery Luzar will see up to fifteen patients a day in the Puente a la Salud Mobile Community Clinic, an auxiliary facility belonging to St. Joseph’s Hospital in Orange that provides dental services. Luzar has served the indigent population since starting his dental practice in 1997 and has watched their situation grow dire over the years.

The clinic was started as a way to keep dental patients out of emergency rooms. Today, however, a number of them hop over to Puente a la Salud from St. Joseph’s emergency room.

“Most of the time we’re just putting out fires,” Luzar said of his patients, the majority of whom come from neighboring Santa Ana. Typically they show up with abscesses and advanced gum disease resulting from chronic neglect, or “big pain items,” as he likes to call them. He treats their acute problems with antibiotics, painkillers and extractions. The extractions are troubling to Luzar.

“We are extracting a lot of teeth,” Luzar said. “We are supposed to be as conservative as possible, but at some point you have to be realistic, too.” Some patients’ poor prognoses mean there is no chance of salvaging their teeth. The downside to extracting teeth, especially in young children, Luzar says, are the myriad lifelong repercussions ranging from poor nutrition to speech problems.

UCI Medical Center, like St. Joseph’s, has also been accommodating its share of dental patients filing into its emergency room. Their statistics show that in 2011 there were a total of 135 dental emergencies, bringing it to an average of 12 patients per month, according to spokesman John Murray.

UCI’s emergency room is not staffed with a dentist, and unlike St. Joseph’s, does not have a mobile unit to fall back on. UCI’s protocol is to immediately find a community clinic serving the indigent and Medi-Cal patients, such as Puente a la Salud, and promptly refer them there for necessary treatment where possible, Murray said. Emergency staff will administer care up to anesthesia and antibiotics when immediate care is not available.

Emergency care costs much more than preventative care, according to research done by the Pew Center on the States Children’s Dental Campaign. The $61 average cost of a preventive dental visit jumps to $172 as an emergency room visit, and on to $5,044 should hospitalization be required. That makes emergency dental care too costly for many area hospitals, especially since often, that money is not recovered.

The most recent survey by Pew, conducted in 2007, showed 8 percent of the 83,000 Californians who visited emergency rooms for preventable dental conditions returned to the emergency room within a year.

But those numbers are likely even higher today, given that the state eliminated most adult dental benefits from Medi-Cal in 2009.

Poor dental care can also have an economic impact that feeds the cycle of poverty, according to Arlene Glube, director for the southern California offices of the Center for Oral Health.

“We have encountered an increasing number of women and men who cannot smile because they don’t have their teeth,” Glube said. “Without a smile, they cannot even get hired.”

She attributes it in great part to the 2009 state budget crisis, when DentiCal – the state sponsored dental care plan for the indigent – was put on the chopping block.

Another problem is the effect a lack of a mother’s dental care can have on her newborn, Glube says. Though pregnant women are still covered under Denti-Cal, services are so limited that they remain tremendously high risk, Glube says. Unresolved periodontal disease makes babies sitting targets for infections almost straight out of the womb.

“You give birth to a clean slate, and in ten days that becomes a high risk child because they’ve [mothers] passed streptococcus onto them through frequent personal contact,” Glube says.

Luzar agrees that the system isn’t working well. One of his main frustrations is what he perceives as a communication gap between those developing the policies and those on the front lines of patient care.

“Those [health reform legislation] articles I read are so lengthy, they’re written for someone with a different mindset,” Luzar said. “I’m in the trenches everyday working, and it’s like they’re from another planet. I wish they were out more in the field and seeing what’s going on instead of blindly writing these laws hoping they’ll fix the problem.”

To Luzar, it’s black and white. The fact that there are provisions in the health care reform legislation addressing dental care standards, but have not been funded by Congress, is not going to change anything. This population, he says, desperately needs things like patient education (one provision that remains unfunded) to make a lasting impact.

His commitment to his patients will never waver, though.

“We exist purely of their existence. My mission is to reach out into the community and keep them out of these emergency rooms,” Luzar says sympathetically.

Despite charging the lowest fees possible at Puente a la Salud- a mere $10 co-payment for services such as deep cleaning, which is done at an average rate of $1,200 at a dentist’s office- Luzar does not worry about where the money for overhead, supplies and lab costs is going to come from. His overriding concern is his patients, whose plight has become all too familiar over the years.

“It’s very different for these people to come up with even a couple hundred dollars we need to charge for dentures…they need to go to other family members. Most don’t have cars, they ride the bus here. When I see them counting quarters in here I realize they don’t even have the $10 copay,” he said.

Note: This story was updated on Oct. 24 to clarify information received from the Pew Center on the States.