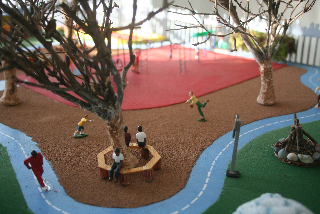 On a rainy Sunday this month, Maria Mendoza was at Santa Ana’s Roosevelt Elementary with her children, niece and nephews aged two to ten in tow. The immigrant mother of three had brought all six children to take advantage of the newly available playground, despite the weather. They’ve been coming every weekend since June, said her niece Nayeli Vasquez.

But until earlier this year, the children had no other options. Asked where they usually played on weekends, her nephew Alberto Vasquez volunteered: “my house.”

Pointing to the playground equipment, Nayeli Vasquez, a fourth grader at Roosevelt Elementary School, said she liked the playground much better than the ones her parents used to take her to.

“It doesn’t have any of this,” Vasquez said, pointing to the Spider Web monkey bar equipment with a smile.

The children had access to school grounds on the weekend thanks to efforts by a coalition including the California Endowment, Latino Health Access Together and the Santa Ana School District. They helped to make the Roosevelt Elementary School’s playground available on weekends by way of a Community Access Agreement.

“The whole principle was because they live in a densely populated area, the readily available options are school yards where neighboring residents would be able to use school ground as a park,” said Latino Health Access Hub Manager Gloria Giraldo.

The $200,000 project, financed by California Endowment, entailed negotiations between the district and both organizations as well as a renovation of the playground to include trees, additional equipment and resurfaced asphalt among other things.

“Residents have not only been very receptive and involved, but also very grateful,” said Latino Health Access Director of Policy Dolores Gonzalez-Hayes.

Good health is not just about having an insurance card and a doctor, Giraldo said. It means making changes to the built environment, she added.

“Good health begins where there is green, open space,” Giraldo said. “We don’t want to see a liquor store on every corner.”

Santa Ana has challenges not faced by master-planned cities such as neighboring Irvine.

“Decades ago, planning wasn’t the same kind of holistic endeavor where the health of people in those communities was a consideration,” said Jay Trevino, Executive Director of the city’s Planning and Building Agency.

Planning that isn’t holistic occurs in “silos,” Trevino said, with consequences like great distances between recreational and residential areas, for instance, which promotes an isolated and stationary lifestyle.

“Back then, all the transportation engineers cared about was cars and moving them fast, somewhere where they won’t create noise and danger…and an educational institution was solely for educating kids,” Trevino said. “With over a hundred years of unholistic planning, this is what you end up with.”

Creativity is largely the solution in cities that are mostly built out, like Santa Ana, Trevino said.

Certain housing policies adopted generations ago also pose a problem for health, Gonzalez-Hayes said. Some apartment buildings, for example, both don’t let children to play in the halls and have no common area.

“With this density of population in buildings where apartment owners or property management companies say ‘don’t run in halls,’ what do you do with all that energy?” Gonzalez-Hayes said.

“What we’re doing is turning the lemons into lemonade,” Trevino said. “And there is lemonade to be made here.”
While the Roosevelt conversion is currently a pilot project, it shows promise.

Gonzalez-Hayes said they see this idea as worthy of spreading to multiple areas within the city.

Ironically, it wouldn’t be the duplication that presents challenges. It would be getting the word out. A community of predominantly working poor families, she points out, is not one that has the freedom to be at association meetings.

“When these types of things have not been available and people are not used to going there, there’s a delay in awareness,” Mejia said. “That has been the challenge, for the community to feel they’re going to a public place.”