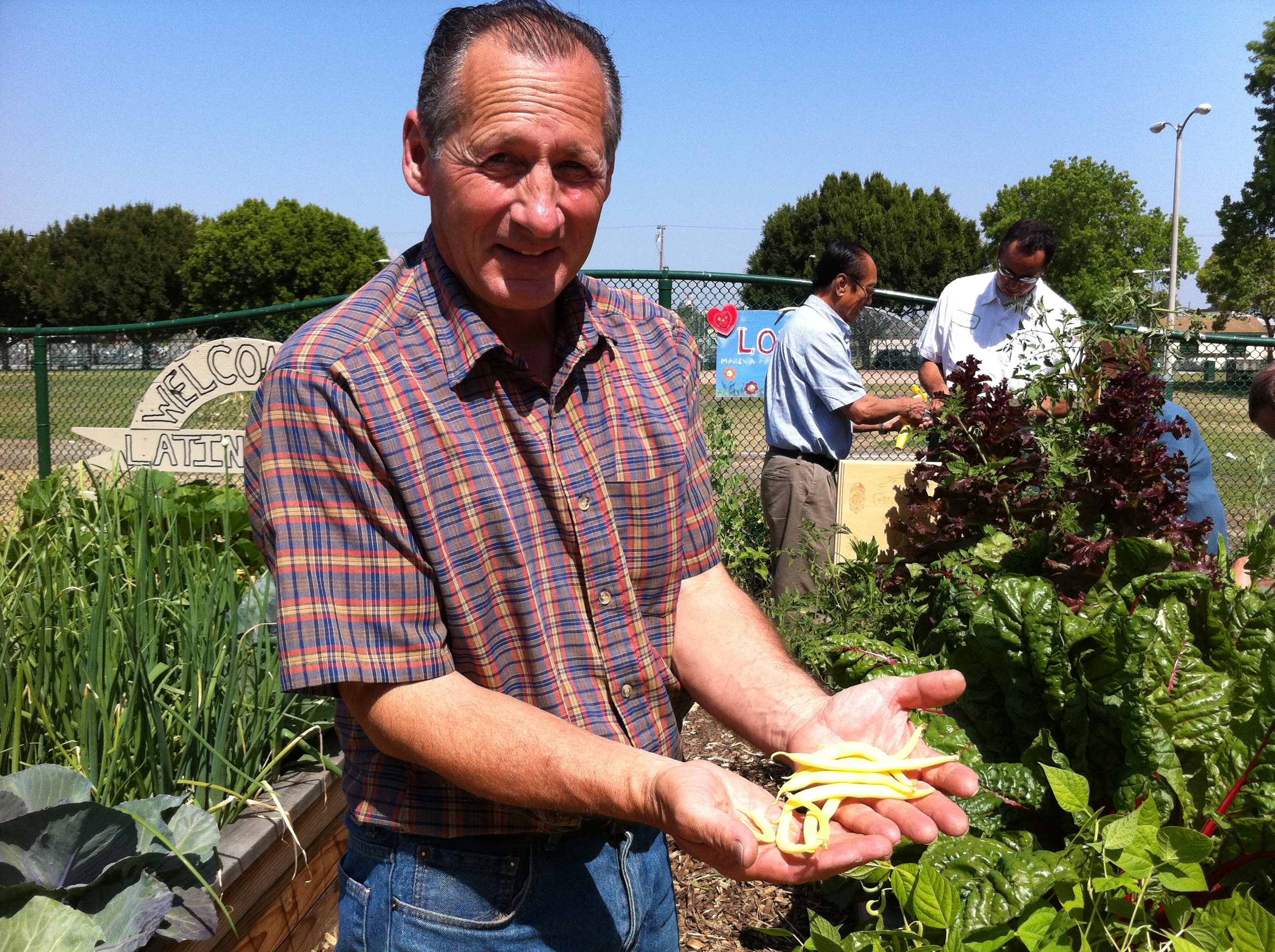 It’s harvest time, and the Long Beach Peace Garden’s assistant manager Stephen Du Prey is zipping down the rows of raised beds bursting with organic red chard, carrots, peas, asparagus and collard greens. A Cambodian family tends to the Chinese broccoli in their plot. A Long Beach police officer unearths a bunch of radishes from another bed while a group of Boy and Girls Club kids are getting a lesson on the origins of corn.

“Children now are so detached from food sources and they’re so dependent on the modern market to provide foods,’’ said horticulturist Du Prey. “The thrust of this is to let children be amazed by the miracle of planting seeds.”

Tucked into a corner of Martin Luther King Jr. Park in a high-crime Central Long Beach neighborhood, the Peace Garden has become a community-gathering place and popular outdoor classroom since far-flung neighborhood groups and city leaders built the verdant patch last year. The Long Beach Weed & Seed program hired neighborhood youth to construct the organic, pesticide-free garden and greenhouse with the oversight of the Central Neighborhood Advisory Council and South Wrigley Neighborhood Action Group. The young people also helped design the raised beds, which are four feet wide by ten feet long, that are easy for children, seniors and people with disabilities to access. There’s also a learning center in one corner, with benches and a chalkboard, where students from across the city come with their schools or clubs.

The construction was supported by $14,000 grant from the California Gang Reduction, Intervention & Prevention program.

Virgia Wade, 80, one of the neighborhood leaders and founders, said that having African-American, Cambodian, and Latino youth cart soil and sow seeds was a very effective way to ease racial tensions in and outside the park. The young people organized the garden into special plots devoted to the indigenous foods of different cultures. The Latino garden boasts jalapeno and cilantro; the Cambodian garden has Taro root and Edaname Daikon; The African American garden is home to bushels of collard greens and turnips.

“We had to get them to work together so they didn’t get out there and fight,” said Wade, noting that the park had been a flashpoint for violent clashes in recent years. “So this is where we came in. To teach these youth how to get along.”

Long Beach Police Department’s plot—labeled as the “guardian’s garden”—is symbolically placed near the entrance as protection. The LBPD Youth Division applauds this innovative concept for “promoting peace and wellness at the same time.”

The garden was recognized with the 2011 Peacemaker Award from the Long Beach City Council and is now one of four finalists for Neighborhood of the Year Award, for Neighborhoods USA, which honors community beautification and revitalization efforts.

Planting the Seeds of Nutrition Education

Every visitor to the Peace Garden will eventually have the nutritional benefits of fresh produce planted in their heads. These healthy food lessons dovetail with Network for Healthy California, a statewide movement working toward improving the health status of low-income Californians through increased fruit and vegetable consumption. The California Department of Health Services says only 38 percent of Latino adults eat the recommended amount of fruits and vegetables a day, with more than one-third eating two or less servings a day. About 44% of African-American adults, by comparison, eat two or fewer servings of fruits and vegetables a day.

That is something Wade would like to change. Standing over a tall bush of collard greens, Wade recalls that her mother grew veggies in the garden for her 8 siblings to eat. “This is what we call soul food.”

“We didn’t go to the store when we wanted something. We worked in the garden,” she said. “These kids don’t know about raising vegetables —one wanted to grow macaroni and cheese!”

On a recent spring day, Du Prey spent time telling more than a dozen elementary school kids in the Boys and Girls Club about food in it’s natural state. As the children sat in the garden’s learning center—wooden benches with a big black chalkboard—Du Prey handed each student a freshly picked ear of corn. On his instruction, the students identified the husk, silk and other parts and then ate the cob raw. Du Prey then brought them to a corner of the garden where he dug a 20-square-foot patch for them to plant and tend the sweet corn this summer, which will be pollinated by the wind.

“Children come into the garden and for the first time in their lives, they’re eating raw foods,” he said.

Annie Greenfeld-Wisner, chair of the Central Project Area Committee and a founder, said it was very important for those who built the garden to see a tangible result of their labors. “I think that’s what makes them proud,” said Greenfeld-Wisner. “We said they were going have a garden and they have a garden.”

She is proud of the statistics: Two dozen community members now participate in the upkeep, oversight and maintenance of the garden; at least 15 youth each week are taught urban farming techniques; and over 200 children, youth and families have visited the Peace Garden since its opening last summer.

Greenfeld-Wisner expects that the garden will continue to yield more than healthy vegetables for the community. An initial $5,000 grant from State Farm Insurance has blossomed into donations and materials worth more than $57,000. Timothy Collier, the owner of the Green Plumber, for instance, donated water lines and labor materials for the water irrigation system.

Tracy Colunga, the Site Director for the Long Beach Weed & Seed Program said this neighborhood restoration project, with it’s multi-agency approach, is already a showcase for the rest of the city on how to revitalize high-crime areas.

Looking around at the gardeners tending the crops recently, she smiles at everyone harvesting in the sun.