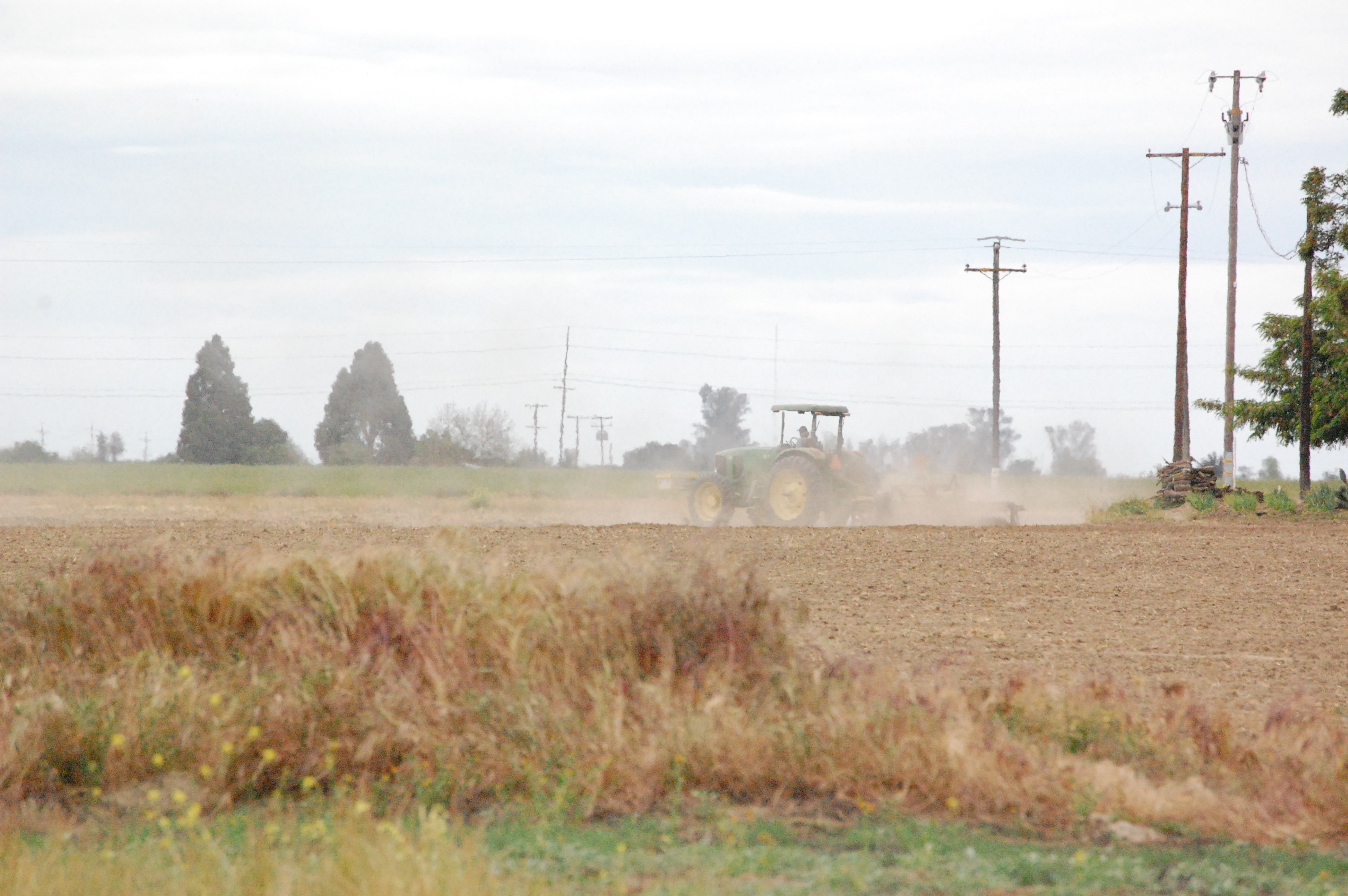 Tito Sanchez likes the quiet nature of the Livingston subdivision he moved into six years ago – except when the farmer in the adjacent almond orchard shakes the trees during harvest. That’s pretty noisy, he admitted. And then there’s the fertilizer they use on the vegetable field to the west of his home. “Man, let me tell you, it stinks,” Sanchez said.

Sanchez has learned what many urban dwellers find out when they move into homes on the edge of farming areas: the promise of a bucolic life near open farm fields gives way to the reality of modern industrial farming.

Noise, dust, odors, flies, chemical spraying and night operations are as much a part of modern farming as green fields and neat rows of orchard trees.

The situation isn’t much fun for the farmer, either. They complain about domestic pets trespassing on their property and harassing farm animals or workers, according to county agricultural commissioner David Robinson. Increased vandalism, theft, garbage dumping, traffic and speeding on rural roads are issues too, said farm advisor Maxwell Norton, as are children wandering into farm fields.

So what’s the solution? The slump in new home sales has allowed some breathing room to think about the issues. Everyone from city zoning officials to animal nutritionists are working on easing urban-rural conflicts.

Norton, who works with the University of California Cooperative Extension office in Merced, has studied the problem of residential land use butting up against farming, looking at two Merced County communities, Livingston and Los Banos. Both communities have subdivisions building into what has previously been farmland, but the reaction of the residents was markedly different: homebuyers in Los Banos had far more complaints about subdivisions encroaching into farmland than did those in Livingston.

Norton speculates that the difference stems from the fact that many of the new Los Banos residents are coming from large urban areas like San Jose, while the Livingston homebuyers tend to be from the valley, and have grown up around agriculture.

The conflicts fall into a couple of broad categories, Norton said: nuisance complaints about things like noise, dust, odors and night operations; and a perception of health risk from farm spraying of pesticides.

Agriculture is an industrial land use, Norton noted, and it can frequently be incompatible with residential uses. Farms can peacefully co-exist with other industrial uses or commercial development, but “most people are pretty picky about their surroundings,” he said.

Animal operations, like dairies and poultry farms, are a particular problem. In addition to odors, animal operations can attract additional flies and even birds that can annoy homeowners.

Pesticide spraying raises health concerns for nearby residents – especially if they can see the activity, or smell something, Norton said. Farmers are prohibited by law from allowing spray to drift off their ranches, he added, and application instructions spell that out.

“It runs the spectrum. We investigate them all. Some have merit, some don’t,” Robinson said. “If someone is having a pesticide issue, we want to hear about it and look into it.”

The complaints are seasonal, starting with spring when farmers are establishing their crops, and tapering off as harvest approaches, Robinson said. Insect and dust complaints peak in the summer, and winter is pretty quiet, he said.

The county Department of Public Health handles many of the odor complaints, and fields between 30 and 50 complaints a year, said Ron Rowe, supervising environmental health specialist with the department.

Most odor problems are from animal farms, and are weather related, he said. Odor complaints rise when weather is wet in the spring followed by heat, Rowe said. High wind can cause more odor complaints, but it can also diminish the smell and the complaints. Air inversions common in the valley can amplify the problem. “It’s very much driven by the weather, and unpredictable,” Rowe said.

The Public Health Department tries to respond to complaints within 24 hours, and interviews both parties, Rowe said. Some of the complaints aren’t valid, but most are, and the department works with the farm owner or operator to alleviate the problem.

“There are a variety of different motives behind complaints. It might be an old feud, you never know,” Rowe said. “We take them all seriously. Some require a significant amount of time to get resolved. It may be an old (farm) facility that is failing or struggling. We try to be reasonable with the time lines, but if it needs to be corrected, we are mindful of that too.
“We are not necessarily the favorite person on the block all the time.”

Noise complaints can fall under the purview of the Sheriff’s Department, and dust is an air quality problem falling under regulations enforced by the San Joaquin Valley Unified Air Pollution Control District.

Cities are looking at requiring buffer zones between agricultural and residential land, Norton said, although who pays for it and who maintains it in perpetuity could be a stumbling block.

Valley cities are also contemplating denser development to minimize the encroachment of residential development on agriculture. Something as simple as making city boundaries straight rather than zig-zag cuts down on the number of homes abutting farm land, Norton said.

Some counties have passed “Right to Farm” ordinances that try to establish the farmer’s right to conduct his business in the face of changing land uses around him. Norton doesn’t think they are effective, however.

“You cannot take a person’s right to complain to a regulatory authority away, if they feel a regulation has been violated. And the regulatory agencies are required to investigate,” Norton said.

Some of the problem stems from the different ways cities and counties view farmland, according to Norton. Counties see farmland as an industrial use that generates taxes and jobs. Cities generally view agriculture as a holding category for future urban growth, he said. “Historically, cities haven’t viewed the conflict or preserving farmland as their problem.”

Some cities are changing that attitude, however, Norton noted. Cities are creating farmland easements to maintain a rural character or to preserve the identity of a smaller city threatened with being swallowed by a larger one.

Dealing more directly with the cause of the complaints, odors can be managed with the right farming practices, Rowe said. Corrals can be groomed and graded so they do not accumulate waste that becomes airborne, for instance. “The general rule is to keep wet things wet and dry things dry,” he said.

Recent research at the University of California at Davis has made great strides in identifying sources of odors in animal operations, Rowe said, and best practices management can greatly reduce the problem.

All dairies are required to develop waste and nutrient management plans, Rowe said, and they are required to work with specialists like agronomists, engineers and animal nutritionists to reach a sustainability plan.

Merced County developed software in 2006 to help dairies comply. The program includes goals and objectives, and allows dairymen to work toward and become certified as in compliance with state law. The software is online and free, and is being used by at least 1,100 of the central valley’s 1,600 dairies, Rowe said.

The air district has imposed regulations to keep dust down with techniques like watering areas where farm equipment might kick up dust.

“Cities have spheres of influence around them, and there will always be some growth into the ag areas,” Robinson said. “We have to come up with strategies to all get along. “

Sometimes, the solution is just better communication, he said. “Some times it takes an intermediary to smooth things over. The farmer might let neighbors know, ‘On this day I will be spraying, or making noise with harvesting.’ The homeowner might say, ‘As long as I know, I can leave for the day.’”