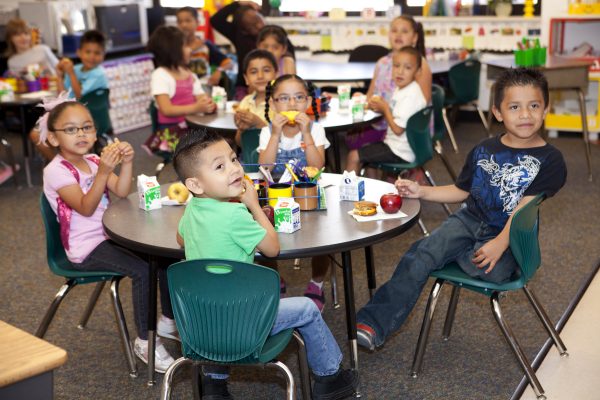 In a tiny school district on the outskirts of Stockton, an elementary school principal is incorporating the work of leadership icon Stephen Covey to produce some surprisingly youthful leaders: an entire student body of more than 500 kindergarten through 6th graders.

Principal Nancy Martin hopes to end school violence and bullying by creating responsible students guided by strong student leaders. Her ambitious goal and the methods she employs place her on the cutting edge of violence prevention in the schools, joining leaders from across California and the nation who are trying new methods to change their campus culture.

Martin discovered Covey’s curriculum “The Leader in Me” halfway through her second year at John R. Williams Elementary School and found it to be “the cherry on top” of her school’s growing focus on respect, pride, discipline and high performance.

“Being a leader of our school, I wanted to promote leadership skills with my children,” said Martin, now in her third year at the school. “We just really said ‘We’re not going to put up with bad behavior because we are scholars.’”

Suspensions for fighting, bullying and obnoxious behavior dropped from 141 in Martin’s first year to 92 the second. Martin says this year’s goal is 52. In the past, fights would break out with lightning speed. “Now,” she says, “you bump into somebody and you say ‘Excuse me’ and ‘I’m sorry.’”

Test scores at the school have also improved dramatically. In two years the school’s Academic Performance Index has jumped 52 points.

Parent involvement has also exploded. Martin says that so many first grade parents now volunteer it has become increasingly hard to schedule them.

Each week, 50 students meet at lunch to participate in the school’s leadership program and discuss stories from Covey’s “7 Habits of Happy Kids.”

Students volunteer for the leadership program, and are then given several leadership tasks: they welcome fellow students to school, make daily announcements over the public address system, help keep the morning cafeteria orderly, and police a “no running” policy on the playground. Dressed in business attire, fifteen of the students recently hosted a board meeting for the school district. They greeted parents upon arrival, and acted as “hospitality helpers” for the evening. The student body president led the Pledge of Allegiance.

Beth Horton, head of the leadership program and a Title I English Language Resource Teacher, said the students are not just expected to act as leaders during school hours. “They work on being a leader 24/7,” she said, adding that the volunteer program continues to grow in popularity.

The elementary school is part of the 8,500-student Lincoln Unified School District. Approximately 75% of the school’s students receive free or reduced lunches.

For children of all ages, the lasting emotional effects of bullying include fear, anxiety, depression, low-self esteem, and even lowered immune support. With scientific research indicating that bullying can also affect proper brain development, schools have even greater reasons to eliminate this abusive behavior.

The Mayo Clinic states that the short-term health effects of bullying can include headaches, stomachaches, and trouble concentrating. Some even contemplate suicide.

But the pain of social ostracism may have even larger consequences. A team of UCLA researchers discovered that being an outsider also affected areas of the brain no different than physical pain. During a virtual ball-tossing game called Cyberball, players were systematically excluded from the game by other “participants” (actually a computer program). The study indicated that some parts of the brain that registered physical pain were also ignited during social separation or rejection.

To prevent all of these effects, schools from elementary to high school are changing their tactics. At one time focusing on the bully or the bystanders who watch passively, educators winning the greatest acclaim involve the entire school in a paradigm shift.

Los Angeles school intervention expert Holly Priebe-Diaz says the greatest success arrives when schools change the entire campus atmosphere from competitive to cooperative. Diaz, a former social worker who now works for the school district’s Office of Human Relations, Diversity and Equity, says a positive culture shift happens when students are encouraged to “stick up for each other… and say ‘This is not happening in our school.’”

Although news reports focusing on the horrors of school shootings and violence at the high school level, the roots of bullying begin much younger.

“The irony here is that it starts in kindergarten,” says Nicholas Carlisle, executive director of No Bully, a San Francisco-based non-profit formed in 2009. In elementary schools, Carlisle points out, 30% of students are either bullies or bullied – a figure that remains surprisingly consistent all the way through high school.

“You’ve got to go even beyond the bystander to the teacher culture” which often tolerates sarcasm and even has its own cliques, says Carlisle. In schools with high incidence of bullying, relationships between teachers and parents are typically poor as well. The solution, he says, is “a strong, positive vision for the whole school community.”

No Bully claims to solve more than 80% of bullying problems with a program it calls Solution Team. Groups of up to eight bullies, their followers, and peers are brought together for a series of three structured meetings where they explore the emotional consequences of bullying. The bullies are told they aren’t in trouble but, instead, are asked to help solve the bullying problem for the entire school.

While bullying and social ostracism often begin in elementary school, it doesn’t stop there.

“There’s something particularly painful about middle school,” says Carlisle. Because the need for approval heightens during adolescence “bullying in those grades is felt way more intensely.”

Hale Middle School in Woodland Hills, a suburb of Los Angeles, presented Stand Tall Day in February to help defuse its bullying problem. Instead of regular classes, the school held four 50-minute breakout sessions that featured student-authored plays, self-defense demonstration, an essay contest, and a powerful video presentation by Teen Truth Live, followed by conversations with the anti-bullying group’s speakers. The day culminated in a school-wide discussion and rally that featured a student-authored song with the refrain “Bully bully go away, we don’t want you here today.”

“The whole day was kids examining ‘What is bullying and what can I do about it?’” said assistant principal Greg Miller. “We wanted the kids to talk. They’ve all been affected by it.”

Particularly gratifying to Miller was the involvement of parents at the event. “It’s hard to get five parents in the middle of the day,” said Miller. “We had 120.”

Miller said immediately after the event, reports of violence at the school actually tripled, which he took as a good sign of the program’s success, because students began seeing it as a problem for the entire school, rather than an isolated incident. “If we cut (bullying and violence) by 50% a year that’s a huge amount.”

Less than a month before the Stand Tall event, Hale was one of eight schools on lockdown after an LAPD officer was shot by a suspected car burglar not far from a nearby high school. Students were kept at Hale until 8 p.m.

At the high school level, the recent New York Times article Web of Popularity, Achieved by Bullying explored the latest scientific research indicating that aggression occurs “as students jockey to improve their status” in a competitive environment.

At a Sacramento high school, a new principal has instituted student interviews and signed contracts to improve chronic behavior problems by creating a collaborative environment between students, teachers, administrators, and parents.

Stanley Echols, in his first year as principal of American Legion High School, researches the records of every student coming into the school, and signs behavior contracts with any having a history of bullying or chronic misconduct. Parents are also notified of future consequences if students fail to live up to the contract.

American Legion High School is a continuation school for students at risk of not graduating in four years. Nearly all of its 350 students receive free or reduced lunches.

“The atmosphere at the school,” says Echols, “is that students know bullying will not be tolerated and that the school and law enforcement will deal with the issue immediately.”

One of the greatest areas of improvement at the school, he adds, is getting the students to realize that talking to teachers or administrators is not “snitching.” He says with “the help of a good counselor students will now confide [in the] administration as long as their peers do not find out.”

Martin said students now walk with pride through their hallways, and discuss the latest books they are reading. The whole school environment, she says, is slowly evolving into a greater organism that celebrates education.

“They know why they’re coming here and know we have high expectations for them,” says Horton.