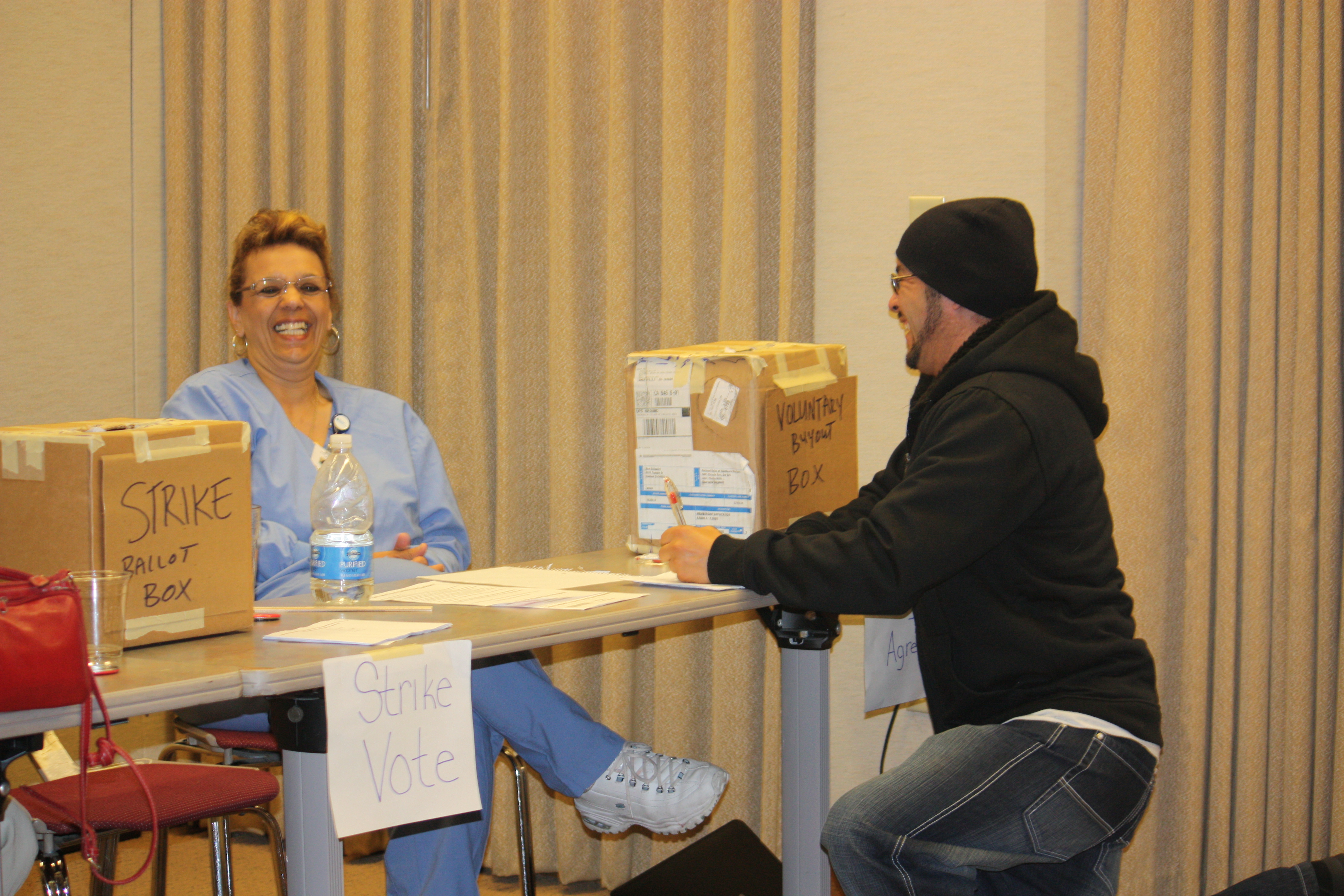 Hospital cutbacks and lay-offs are on the rise statewide, but at Salinas Valley Memorial Hospital, a cost-cutting plan that could claim as many as 200 jobs and radically reduce health and pension benefits has workers threatening to walk off their jobs in protest.

“Our philosophy is when workers stand together, they can and do prevail,” said Leighton Woodhouse, a National Union of Healthcare Workers spokesman.

The NUHW has struggled to make that case to the state’s healthcare workers ever since it broke from the Service Employees International Union, the nation’s largest labor union, two years ago in a dispute over local control and governance.

During that time, the two unions have competed in representation elections around the state.

So far, just 7,600 employees in hospitals and nursing homes statewide have opted to join NUHW, while more than 140,000 have stayed with the SEIU, according to SEIU spokesman Steve Trossman.

But now, in Salinas, the union has another chance to prove itself, if it can win a solid contract and block lay-offs.

After 28 years of caring for patients at the hospital, Licensed Vocational Nurse George Ross said he could soon be out of work if the lay-offs are approved.

In addition to the job cuts, the hospital has proposed a wage freeze, a shift from a defined benefit pension to one that’s similar to a 401.K, as well as a sharp rise in health insurance co-pays and deductibles.

Ross, who serves on the NUHW bargaining team, staffed the polls April 25 as nursing assistants, respiratory therapists, housekeepers, and dietary workers filed into a hospital meeting room to cast ballots in a strike vote.

Now, as many as 700 SVMH workers who clean rooms, make beds, give medicines and take x-rays could abandon their posts for picket lines in the coming weeks to pressure the hospital to reconsider the cuts.

Days after the announcement, a handful of caregivers pleaded with the hospital’s five-member elected Board of Directors at a standing-room-only meeting to stop the cutbacks.

“Although I consider myself a very efficient person, I feel inadequate because all the efficiency techniques don’t seem to be working,” said Mercey Stoffey, an oncology nurse. “I don’t have time to give that quality care. Without aides, it’s going to get really bad,” Stoffey said.

The hospital has already shaved some $34 million from its $350 million yearly budget, but administrators say about $15 million more must go, most of it in labor costs. Union members question the need for such deep cuts, pointing to financial statements that show the institution operating in the black.

Fueling the workers’ anger is the hospital’s decision to pay Chicago-based consulting firm, Wellspring-Stockamp, more than $2 million earlier this year for advice on cutting jobs and benefits. Union leaders are also furious over the nearly $4 million supplemental retirement benefit Downing will receive in addition to his $150,000 annual pension. They point to the hospital’s hiring of another corporate consultant, McKinsey and Company, and in a recent Monterey Herald op-ed questioned whether McKinsey is advising the company on privatization.

Not so, said hospital spokeswoman Adrienne Laurent. SVMH is a district hospital governed by a publicly elected board, and privatization would require voter approval.

SVMH has been hurt by a decline in privately insured patients and an increased demand for charity care, said hospital Vice-President Bev Ranzenberger.

While the hospital still runs at a surplus, its bottom line is shrinking, and isn’t sufficient to pay for capital improvements the hospital must make, argued SVMH consultant Mike Profumo.

Meanwhile, Ranzenberger said Med-I-Cal payments have been cut and a major insurer has demanded deep discounts.

“All of that is forcing us to decide what to do to evolve,” Ranzenberger said. “We are going to treat patients in a more efficient manner while maintaining quality.”

If workers strike, Ranzenberger said, “We’re looking at all options. We’re being proactive. I’m confident we’ll meet the needs of our medical staff.”

Ranzenberger said she was equally confident the hospital would make its proposed cutbacks, even as the NUHW wages an all-out battle against them while taking on the SEIU.

The NUHW has asked the National Labor Relations Board to overturn a recent election in which the SEIU won the right to represent 40,000 Kaiser Permanente workers in Northern California, arguing that the SEIU and the employer illegally colluded to thwart the NUHW’s campaign. Later this year, an NLRB judge will decide whether to order a re-run of the vote.

“I think it’s pretty much over,” Trossman said, adding that his union no longer considers the NUHW a threat.

Local NUHW supporters say the union is already a force to be reckoned with, having partially beat back a previous round of job cuts at SVMH last December.

“We deliver babies. We go to quinceañeras. We’re family. We’re going to fight for one another.”

On a recent Tuesday afternoon after hours of negotiations, Perez and a couple of her fellow bargaining team members relaxed over sandwiches at a local Denny’s.

“What’s at stake?” asked Marilyn Benson, an LVN and veteran union activist in her seventies. “Our entire union, our contract, and all of our benefits.” In short, she said, everything she’s fought for in her 38-year career.