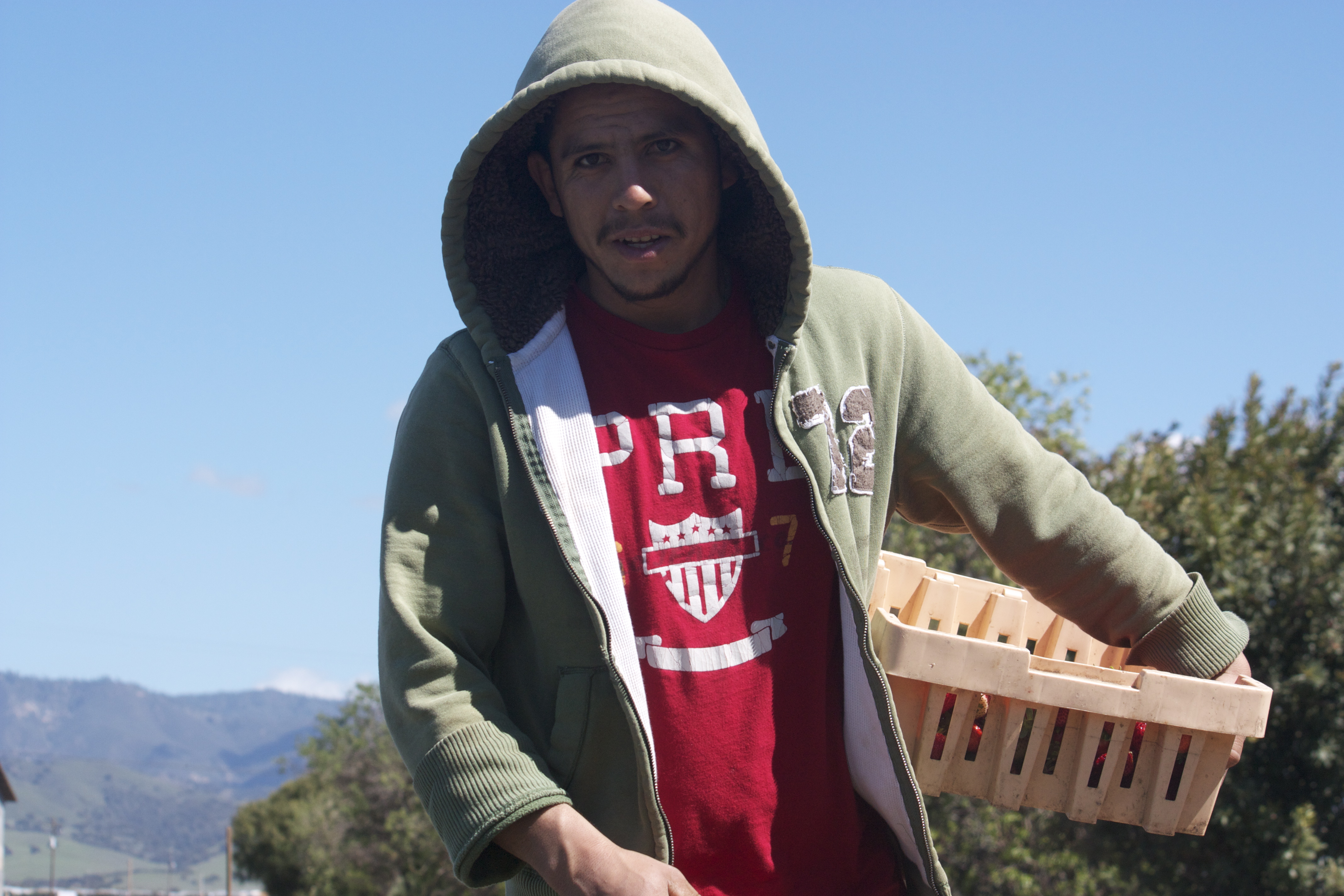 On a sunny March day, farmer Rigoberto Bucio quickly moved through a row of ripening strawberries, his back bent at the waist as he hunted for the brightest red ones, and snapped them off with a flick of the wrist.

It’s the first week of the harvest and too early to tell whether the thousands of dollars Bucio has sunk into a four-acre plot of organic strawberries, chard, broccoli and cauliflower will pay off.

Bucio is just 22, but for four years he’s grown and marketed his own crops at the Agriculture and Land Based Training Association, a non-profit classroom program and business incubator for aspiring organic farmers on 115 acres just south of Salinas.

Thirty-eight farmers-in-training currently till the land at ALBA, growing everything from typical local crops like radishes and kale to traditional Mexican herbs and cactus pears. Like Bucio, the majority are farm workers—mostly Latino immigrants—seeking their own businesses. Others are career changers or organic food enthusiasts hoping to capitalize on a growing market for locally grown produce.

Most face long odds in the Salinas Valley where industrial agriculture is king and land prices are sky high.

“You just have to pray, leave it in God’s hands,” Bucio said. That is, after months of 14-hour days of weeding, watering, and battling pests the organic way—by deploying armies of their natural predators in the fields.

Later this year, the Davis-based California Institute for Rural Studies is set to complete a study showing how many of ALBA’s graduates are still farming and how they’re faring.

“The challenges are pretty well documented,” said ALBA Executive Director Brett Melone. “There are barriers related to access to land, capital, markets, and then there are individual obstacles and barriers: immigration status and language.”

But like Bucio, some of ALBA’s fledgling farmers have begun to see glimmers of success.

A native of the village of Cieneguillas in the central Mexican state of Michoacan, Bucio was 15 when he came to Salinas seven years ago to join his parents and two brothers. Looking for work, Bucio happened onto ALBA’s land, and one of the group’s aspiring farmers hired him to pull weeds and pick strawberries. Two years later, his boss convinced him to join the group’s annual six-month organic farming class.

“I saw a way that I could make more money and get ahead,” Bucio said.

Together with some three dozen others, he studied the nuts and bolts of organic growing, computer skills, food safety, and financing while competing with his fellow students for a slot in the group’s incubator program. The program, which receives both government and private funding, gives newly minted farmers a leg up with subsidized rent, water and equipment rentals and mentoring during their first six years in business.

But Dave Runsten, who directs the California Alliance with Family Farms in Davis, argues there might be a downside to minimizing risk for would-be farmers.

“I think the incubator is a little bit of an artificial situation so when cast out on their own, people run into a lot of obstacles,” Runsten said. “It’s not so simple.”

Because land is scarce at ALBA, about a third of the students are selected for the incubator—mostly based on the business plans they develop during the course.

Bucio built his plan around zucchini because it’s a hardy crop that he’d worked before.

He was offered a quarter of an acre, and seized the opportunity.

“The squash grew big and beautiful,” Bucio said, but he said too much of it ended up in the compost heap because he couldn’t sell it.

Bucio said he barely managed to break even his first year and considered quitting, but opted to try again the following year with strawberries and row crops.

“I just didn’t want to give up,” he said. “I wanted to keep struggling for what I wanted.”

It’s tough for small growers to find markets for their crops, said Jeanne Byrne who, along with her husband, owns High Ground Organics, a family farm near Santa Cruz. Wholesalers want quantity and consistent supply, which small farmers can rarely provide.

“If they’re using you for carrots, they want carrots every week, and they want them to be the same carrots,” Byrne said.

Farmer’s markets where customers prize variety and pay premium prices are no easier to crack, Byrne said, because space is so limited.

ALBA staffer Deborah Yashar said the group has tried to assist its farmers and provide fresh produce in areas where it’s lacking by helping to establish eight new markets in the Salinas Valley in the past five years.

ALBA also operates its own wholesale business, ALBA Organics, which was temporarily without a director the year Bucio got started, but which is stronger now, Melone said. Its clients include the University of California Santa Cruz, Stanford University and Google.

Last year, Bucio’s third at ALBA, he said he was able to eke out a living on his own farm for the first time, without having to work for others, and has also brought his father on. Joaquin Bucio, who supported the family for more than two decades as a farm worker, radiates pride as he said he never dreamed his son would have his own business before his twentieth birthday.

“I thought he’d work bent over in the fields [for someone else]”, the elder Bucio said.

Rigoberto Bucio said he’s determined to make a career of organic farming, and despite the obstacles he said he won’t consider another path. He offered up a tray full of just picked berries, ready to eat, he said, because they’re chemical-free.