A Wellness Program with Something for Everyone 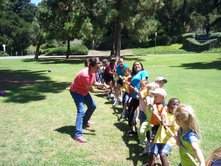 “It all grew from something small.”

This is how Yvonne Garrett, assistant city manager of La Mesa, describes the early days of her city’s award-winning Live Well initiative. The city’s goal of reversing its childhood obesity rate evolved into an eclectic wellness program for all ages that features a Walking Art Trail, new sidewalks, a senior fitness center and family meal nights.

With a variety of funding sources that include the California Endowment, Kaiser Permanente and the County of San Diego, La Mesa has written a strategic wellness plan that engages schools, health providers, businesses and faith communities in an ongoing effort to create the healthiest city in the region. For its efforts the city received the 2009 Helen Putnam Award from the League of California Cities.

“It has grown into something exciting. It has gone across city departments: planning, public works, parks and recreation,” said Garrett, who is also the director of community service.

La Mesa, with a population of nearly 60,000, sits on a series of hills just east of San Diego. Its scenic character masks health statistics that are the worst in San Diego County, with 63 percent of the adult population overweight and 23 percent of that population considered obese. The area also has the highest rates of adult diabetes and heart disease.

For the Live Well initiative, La Mesa joined with adjacent Spring Valley, an unincorporated area of San Diego County. The two were already linked through their school districts, and La Mesa wanted to include as many residents as possible in health and fitness activities.

With three grants from the Federally-funded Safe Routes to Schools program, La Mesa constructed new sidewalks and repaired existing walkways to enable children to safely walk and bicycle to and from school. The City Council approved the Sidewalk Master Plan in 2008, and a recent $60,000 grant from Kaiser Permanente will enable the city to develop a health and wellness element to its General Plan. The project will be completed by 2012, La Mesa’s 100th birthday.

The La Mesa Walking Art Trail, opened in 2007, features custom artwork on utility boxes along the route. Spring Valley opened a gymnasium and teen center in 2007 and installed a walking and fitness path in Spring Valley Park in 2008.

At the annual Kids Care Fest, “kids have an opportunity to just be kids,” said Kaaren McElroy, administrative analyst with La Mesa Community Services. This year’s event, on September 25 at Briercrest Park, featured carnival-style booths and hands-on art projects. Free childrens’ health screenings were provided by Grossmont Healthcare District, a city Live Well partner. Local police and fire department personnel were on hand to teach kids about safety and public health. “Kids have an opportunity to see and even try on some of the equipment and safety gear,” said McElroy.

In September, Live Well began a series of free family meal nights for residents of La Mesa and Spring Valley. Garrett describes the dinner program as a “dual purpose event” that combines nutrition education with the interpersonal aspects of wellness. The topic is menu planning, but the purpose is to strengthen family relationships by sharing meals.

More than 25 percent of La Mesa and Spring Valley residents are older adults, and Live Well includes incentives to target obesity prevention in this population. It is trying to reverse the perception that, for many older adults, weight gain and a sedentary lifestyle are a natural part of the aging process.

The city recently received a Rotary District grant to add outdoor fitness equipment geared for older adults. The strength training and balance equipment will be installed in the senior center to provide training in a public park setting.

“In La Mesa we have three freeways, and with the II8 and completion of 125 freeway they have literally corridored the city into four quadrants,” said Bill Chopyk, community development director. The result has been a fragmented, and not always safe, collection of pedestrian routes that discourage walking and cycling. The many freeway bridges and connecting sidewalks offer opportunities for future upgrades to allow people to walk and bicycle safely throughout these corridors.

“When the freeways came through, it was all designed for the auto,” Chopyk said. With input from CalTrans and the San Diego Association of Governments the city is working to identify the locations that will benefit from remodeled freeway crossings.

Chopyk said the city is committed to improving routes for bicyclists, and its new Bicycle Facilities Plan will incorporate new cycling routes as part of its wellness focus. “La Mesa is a pretty well established community, so there are neighborhoods with very narrow streets where bicycles will have to share the road,” he said. “But wherever possible, we’ll put in the bike lanes and routes.”

A community team concept that includes neighborhood-based volunteers has been central to the growth of Live Well. From its inception as the La Mesa Wellness Task Force in 2005, consultants, health providers, educators and local business owners continue to function as community partners in the wellness initiative. Now the emphasis has shifted to participation of La Mesa and Spring Valley residents as community advocates to shape future wellness projects.

These community advocates also function as liaisons between the city and residents by sharing wellness updates with their neighbors and alerting city officials to neighborhood problems.

Garrett said feedback from Live Well’s community advocates is crucial to developing wellness activities for all population groups. “The way you get people engaged is you deal with the issues that are important to them,” she said. “The more people who are out, the more they can tell you about what’s going on in the city.”

A Wellness Program with Something for Everyone