Affordable housing and one community’s future 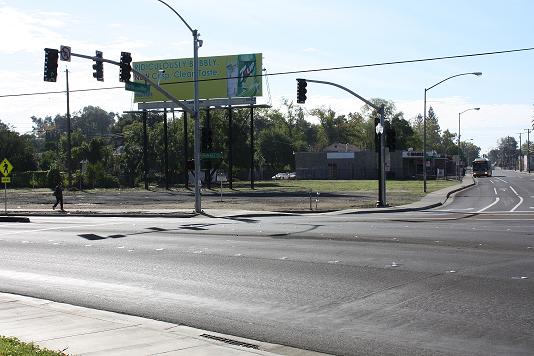 For more than a year, a debate has been brewing in Sacramento’s Oak Park neighborhood around affordable housing. The debate centers on one intersection but represents a much larger issue: is there such a thing as too much affordable housing in one community?

By all accounts, Oak Park is experiencing a rebirth, including new coffee shops and businesses, as well as a new farmer’s market. At the heart of the neighborhood, the Sacramento Housing and Redevelopment Agency (SHRA) permitted developers to move forward with a proposal to construct a large new affordable housing complex at one of the neighborhood’s main intersections and longtime vacant lot, at Martin Luther King Jr. Blvd and Broadway.

“I believe in affordable, quality housing for all. I just don’t believe that we should be concentrating it on one of our most valuable pieces of land, to the benefit of only a small portion of our growing community just for the sake of trudging along with more development,” says Sam Allen, Oak Park Neighborhood Association Board member, and chair of the group’s Land Use & Planning Committee.

Martin Luther King Jr. Blvd. has been the subject of intensive redevelopment dollars to both beautify and increase safety. During community design discussions that have resulted in the re-landscaping of the street, many participants envisioned the chosen site at the Broadway/MLK intersection as a thriving, active retail and business node that would provide much needed services and entertainment for all of the people of Oak Park.

As a result, the Oak Park Neighborhood Association, which voted to oppose the housing development, has suggested the need to find a different catalyst to facilitate new commercial opportunities and safety along the road.

For more than four decades, land use policies have led Oak Park to be a magnet for concentrated affordable housing and its related problems. Opponents of the new complex cite examples like Cabrini Green in Chicago and Pruitt-Igoe in St. Louis as examples of effects of concentrating large-scale affordable housing.

In those complexes, the concentration perpetuated poverty and vandalism, gang warfare, and pest problems were rampant. While everyone agrees that this complex is not the equivalent of Cabrini Green, the disagreement stems from differing views about a saturation of affordable housing in one neighborhood, and equitable distribution through others.

The debate has pitted neighborhood leaders against other neighborhood residents, including one church congregation that has been one of the strongest advocates for the affordable housing complex, and has ties to funding for the development.

“I chose to support the proposed development on the corner on Broadway and MLK Jr. because I thought, all in all, the development would benefit the community. Although I would have preferred to see much more retail space included in the mixed use project, the project does include a mix of residential and commercial and will continue to contribute a tax revenue back into the area,” said Mellisa Meng, a member of the Oak Park Redevelopment Advisory Committee.

Facing a well organized congregation, neighborhood leaders have attempted to facilitate greater commercial opportunities within the proposed housing complex, though to little avail.

The debate will play out in the Oak Park Redevelopment Advisory Commission, as well as Sacramento Housing and Redevelopment Commission in the coming months. And on Nov. 2nd, which ever City Councilmember is elected to represent Oak Park, will have a chance to use their pulpit to advocate for or against the project.

Paul S. Towers lives just a few blocks from MLK and Broadway and serves as the Oak Park Neighborhood Association Board Vice-President, in addition to working for Pesticide Watch Education Fund.

Affordable housing and one community’s future