A beach town moves to a wellness beat 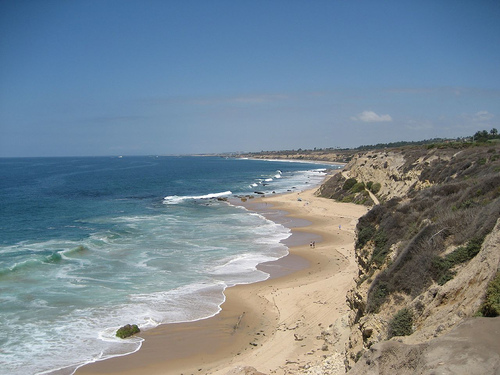 Can a city redefine itself through health and wellness? Long Beach wants to try, and its residents are the reason. The city is the voice of the people, and the people want pedestrian-friendly streets, bicycle lanes, grocery stores and cooking seminars.

Wellness doesn’t come cheap, but Long Beach is hoping its ambitious portfolio of grants and innovative programs will attract new funders eager to participate in this urban laboratory that recently hired its own Bike Ambassador, Olympic cyclist Tony Cruz.

“We’re going back to our roots as a beach town rather than trying to be a miniature Los Angeles,” said Charles Gandy, mobility coordinator for the city’s bicycle initiative. Gandy, a cycling consultant and urban design expert, was hired as part of the city’s PLACE grant, funded by the Los Angeles County Public Health Department, to promote bicycling and walking throughout the city and to help finalize the city’s Bicycle Master Plan.

The city is also developing a separate wellness chapter for its General Plan and will incorporate “active living” principles into existing chapters.

It was a citizens’ project from the beginning, said Gandy. Residents who traveled to other cities wondered why Long Beach couldn’t promote bicycling and walking to reduce pollution and congestion in their city.

“They’ve been to New York, Seattle, Portland, Copenhagen, Paris,” said Gandy. “They’ve seen that bikes can be built into the street infrastructure to improve safety and encourage more people to ride. Anyone who’s been out of Southern California knows this is being done.”

The city recently hosted the 2nd Street Sharrow Grand Opening in the Belmont Shores neighborhood. A “sharrow” is a street lane that can be shared by both bicycles and vehicles. The Long Beach sharrow is a 6-foot wide green striped lane painted mid-street, the only one of its kind on the West Coast.

With $20 million in grant funding for 19 transportation and mobility projects, the Department of Public Works has added education, assessment and training activities onto its traditional roles of planning and engineering.

“As a land use planner, healthy communities and sustainability aren’t things we talked about before, but they’ve become central to the quality of life in the city,” said Steve Gerhardt, senior planner.

Gerhardt conducts the Walkability Initiative in North Long Beach, a low-income area served by many of the city’s public health programs. A central component is the neighborhood survey, he said, walking with residents to look at on-foot impediments and listening to their needs: We need a better crosswalk here; we try to reach the post office this way.

The one-on-one contact with residents has paid off. “They’re starting to understand the connection between the built environment and how we live,” he said.

Another key project is the Vista Bike Boulevard connecting elementary and middle schools at each end of the street. The city plans to construct a series of traffic circles, or roundabouts, to slow traffic and provide more direct bicycle routes to schools. “We did a lot of outreach,” said Gerhardt. “We started out with five traffic circles but ended up with eight traffic circles. Everyone wanted a traffic circle.”

Gerhardt said the biggest fear he encounters is fear of having too much bike traffic: You’re going to send a lot of people on bikes down my street. But with education and outreach, “things have really turned around. People weren’t in favor of a bike lane going into the Bluff Heights Neighborhood,” he said. “A few years later, they appreciate the bike path.”

As one of three city public health departments in the state (the other two are Berkeley and Pasadena), the Department of Health and Human Services designs wellness programs for many of Long Beach’s unique populations, said Ronald R. Arias, director of the Department since 2000. “It has provided us with an incredible entrée into the community,” he said.

Most DHHS programs are grant-funded, said Arias, and the city can often target underserved, high-risk groups that suffer from the city’s most severe health problems: diabetes, obesity and lack of healthy food resources.

One of the most successful programs is the Diabetes Prevention and Management Program, with primary funding from the California Endowment. “We worked with targeted communities the last three years focused on the Hispanic/Latino community,” said Arias.

“One of the positive outcomes has eliminated visits to the Emergency Room for the over 800 who participated in these classes in the past several years,” he said. “We’ve also connected them with a medical doctor so they could avoid Emergency Room visits.”

Reduction of Long Beach’s child obesity rate, almost 23 percent in a 2004-2005 health survey, is a priority for Arias. “We have some extra success stories where young people between 10 and 13 years were on the brink of developing diabetes, but after participating in the program, they were no longer in the risk category,” he said.

Long Beach established the Childhood Obesity Prevention and Advocacy Program (COPA) in 2007 with a grant from the Miller Foundation. Working in collaboration with local schools, the YMCA and Boys and Girls Club, the city organized parent groups into COPA partners. Saturday morning meetings target healthy-living strategies that include the importance of immunizations and healthy food choices.

“A real cool outcome of this program has been the crying-out from the community participants that they don’t have access to healthy food products,” said Arias. The COPA program has been focused in North Long Beach where most families do not have a supermarket within a 2-mile radius.

Through its Neighborhood Store Partnership, the DHHS works with residents, mostly moms, said Arias, to advocate for better quality food in the corner stores and small convenience stores where they shop. The city conducts store assessments and provides color-coded labels to educate residents about fat content and calories. “For working parents it is a very good tool,” he said.

Other popular wellness options include cooking classes for parents and teens through Healthy Active Long Beach and the Junior Beach Runners Program, a one-mile children’s run in the annual Long Beach Marathon.

The bottom line for successful wellness programs is consistent funding, said Arias, who has been involved in advocacy and policy development for 35 years. Grant funding is time-limited, and in the current economy California cities are reluctant to use their General Fund monies for wellness and public health projects.

“Until we get sustainable funding from either a federal source that goes through the states, or more likely through the initiative process, we’re going to be struggling with a patchwork of programs and efforts,” said Arias. “Many of them will be wildly successful, but when the funding goes away, the projects go away.”

A beach town moves to a wellness beat