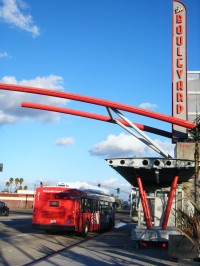 When Richard Kacmar’s boss told him his shift at the Scripps Institute of Oceanography was about to change, Kacmar didn’t know it would require tacking three additional hours to his work day. The change means he must give up his morning van pool and take public transit from his home in City Heights instead. The 15-mile trip, which takes 24 minutes by car, will take nearly two hours each way.

“It’s very sobering thinking about how much time he’s going to have to spend on the bus,” said Anna Daniels, Kacmar’s wife. “I don’t want my husband spending four hours on the road everyday. That seems very unreasonable.”

For Daniels and many of her neighbors she deems “utterly transit-dependent,” long bus commutes and inefficient routes are symptoms of decades-long neglect by transit authorities in a neighborhood where transit use is more than four times the national average, according to a study by the Mid-City Community Advocacy Network. Residents and advocacy groups say funding has been disproportionately allocated to freeway improvements and widening, while transit fares increase and routes get slashed.

Now, as San Diego becomes one of the first cities in the state to develop a transportation plan under a new state law requiring compliance with greenhouse gas emissions targets, City Heights residents are watching to see if their transit woes dissipate.

“Before, the main concern people had for the transportation plan was congestion,” said Kathy Keehan, the executive director of the San Diego County Bicycle Coalition. “Now we’re really going to be looking at ‘What are the environmental impacts of our transportation choices? What options can we create for people?’”

The San Diego Association of Government’s regional transportation plan through 2050 is scheduled to be completed next year. A preliminary report lays out policies that might be used to address emissions in the plan. Not yet approved by the board of directors, the strategy focuses heavily on developing neighborhoods where daily needs and access to transit are within walking or biking distance and transit options and infrastructure are expanded.

With density and an urban location already present in City Heights, this strategy holds promise for residents who want better transit options. But because 46 percent of emissions in San Diego County come from cars and light trucks, according to Keehan, Daniels said she worries funding will go toward targeting choice commuters, those who have cars but can choose to use transit instead. And for Daniels, that would mean more of the same.

“My concern is that, in the desire to conform with the regulations, they’ll put effort into the suburban areas to provide transit and it still will be under-funding and not recognizing transit-dependent people,” said Daniels, who has lived in City Heights for more than 20 years.

The revenue-constrained version of the San Diego Association of Government’s regional transportation plan through 2030 allots nearly twice the amount of funding for highway completion, highway widening and freeway connectors as is does for transit facilities and carpool lanes to accommodate rapid transit buses. Of the $5.9 million set aside for transit facilities, at least $3.5 million will go toward rail systems along the coast. SANDAG has planned rapid transit bus lanes on El Cajon Boulevard, a main thoroughfare that runs through City Heights and connects it to downtown, and moving north and south on Interstate 15, which runs through the middle of City Heights. Residents said it will be a big improvement, because access to major job centers is strained.

1985 The City of San Diego signed a memorandum of agreement promising to mitigate air pollution and build CenterLine, a transit line moving north and south in the center of the soon-to-be-built Interstate 15.

1993 Caltrans signed a memorandum of understanding regarding the CenterLine project.

1998 Construction began to connect I-15 through City Heights.

2007 The CenterLine project was included in SANDAG’s regional transportation plan through 2030.

2009 The Third District Court of Appeals ruled the elimination of State Transit Assistance funding illegal. Environmental Impact Reports began to be compiled for transit stations along the CenterLine route.

2010 MTS cut service to deal with a $30 million deficit in state funds.

“We have more people working three to four jobs just to pay rent,” said Jared Brooks, a City Heights resident who had to wake up at 3:30 a.m. to get to his old job via transit. “I’ve been looking for a job for the past two years. Most of the jobs require reliable transportation and at this point I only have my skateboard, so it’s hard to find a job.”

Access to job centers took a hit this month when the Metropolitan Transit System reduced service on more than 60 bus and trolley lines in response to the state’s elimination of State Transit Assistance funding, a budget reduction that was ruled illegal by the Third District Court of Appeals last June. MTS spokesman Rob Schupp said San Diego lost $30 million in transit funding from the state this year.

Many of the cuts were made on Sundays to limit the impact, including discontinuation of routes that service Coronado, where many City Heights residents work seven days a week in hotels.

Todd Gloria, the city councilman who represents City Heights, said the governor’s staff said in a meeting last week that the state doesn’t expect to fund transit anytime soon. Schupp also said that MTS is budgeting no money from the state in future projections.

“We’ve been hit with a triple whammy,” Schupp said. “Ridership tracks very closely with unemployment, people are spending less, so revenue from sales tax is down and there’s reduced funding from the state.”

But Gloria said new cuts are just a small piece of a long legacy of neglect in City Heights, beginning with the 2001 completion of Interstate 15, which runs through the middle of the neighborhood. In exchange for dividing their community in two, residents negotiated a 1985 agreement with the city and then a 1993 agreement with Caltrans to get a transit line called CenterLine that would run along the center of the freeway and create a route to job centers in North San Diego County. The project was set back by safety concerns, according to Gloria, and is scheduled to be finished by 2014–almost three decades after the initial agreement.

“CenterLine is a wonderful metaphor for the way we do things for transportation here in San Diego,” Gloria said. “The freeway was completed ten years ago but the transit still isn’t there.”

The project is funded by TransNet II, a half-cent sales tax approved by San Diego voters in 2004 for transportation expenditures. But Gloria said he wants to see even more of that money go toward transit. Schupp said once the tax is shared among roads, freeways and transit, MTS only gets an eighth of a cent. Comparatively, Los Angeles transit gets 1.5 cents and San Francisco’s BART alone gets a half cent of sales tax, according to Schupp.

“We choose to put our money toward cars and I give you TransNet as exhibit A,” said Gloria. “It’s in effect until 2048 and two-thirds of those funds are going to go for cars. That may have been fine when voters voted for it, but do you think that in 2048 that we should be spending two-thirds of our money on cars? We have to make some changes because right now we’re locked into a 20th century funding formula that’s going to take us to the middle of the 21st century still prioritizing the cars.”

The SANDAG Board of Directors discussed adjusting the sales tax allocations, but no decision was made. A change in the priority projects promised to voters would require voter approval, and any other changes require a two-thirds vote by the TransNet commission.

Theresa Quiroz, a transit user who is the vice president of the City Heights Community Development Corporation Board, said she is confident officials will reprioritize transit and alternative modes of transportation in the mid-city as the way to offset carbon emissions.

“I think we’re at a tipping point where something has to happen,” Quiroz said. “Transit has taken such a hit that I know of residents who are buying beaters and driving instead. That’s a step in the wrong direction.”

Daniels has her doubts, but said she hopes SB 375, the latest greenhouse gas law, is the turning point City Heights needs.

“Acknowledging the regulation in terms of climate change is certainly important, but it can’t be done as one more excuse for why we can’t develop transit that is fast and often enough to meet the needs of ever-increasing population in the urban core,” she said.