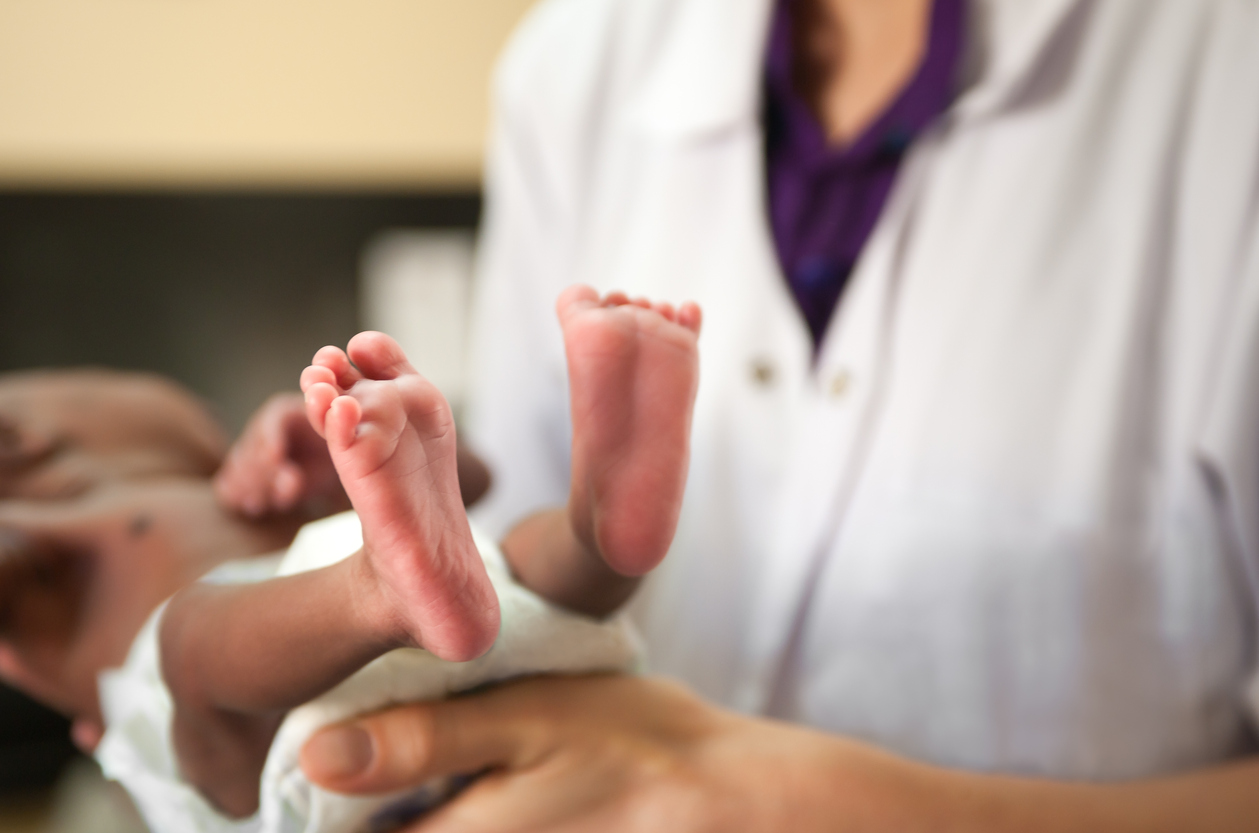 Melissa Papp-Green opens her iPhone to a text about a syphilis test.

The text offers Papp-Green, perched in a cubicle at the Los Angeles County public health department, a window into a doctor’s office miles away, where providers are confronting an epidemic of congenital syphilis, a sexually transmitted disease passed from mothers to newborns.

The text confirms an OB-Gyn is following old guidelines to test for syphilis. It’s an important data point for Papp-Green, a county public health educator. She spends much of her day focused on wiping out STDs in Los Angeles County, which led the nation in early syphilis cases in 2017.

Cases of congenital syphilis here rose 733 percent between 2012 and 2017, with women of color bearing the brunt of the epidemic.

The text was sent by a veteran drug industry rep, one of four the county contracted with last summer to educate hundreds of area medical providers about the congenital syphilis crisis. For weeks, this small salesforce has squeezed into crowded waiting rooms, cajoling doctors to give them just a few minutes of time in the cause of public health.

Like typical drug reps, they have a territory and a pitch. Their swag isn’t fancy — a few pens and a bright canary-colored packet from the county.

Instead of shilling drugs, the reps encourage doctors to take thorough sexual histories of patients, screen all women of childbearing age for syphilis and retest periodically throughout a pregnancy.

So far, it’s reaching doctors who were unaware of the congenital syphilis outbreak. It’s also exposing the high cost of medicine, insurance that won’t cover the cheapest and fastest syphilis test, providers who aren’t quite sure when to test for syphilis and vast health disparities that create a vicious cycle.

Amid this is the growing human toll of an infection that disproportionately preys on the newborns of African American women and Latinas. Left untreated, congenital syphilis can cause severe health problems, including infertility in women, stillbirths and newborn deaths.

Public health nurse Monica Munoz recalled comforting a woman as she lay in a hospital bed, stunned to learn she had congenital syphilis around six months into her pregnancy.

As the pregnant woman unspooled her story, Munoz learned the woman wasn’t screened for syphilis, even though the public health department recommends it.

Such lapses aren’t the only problems bedeviling the department’s quest to eradicate congenital syphilis in Los Angeles County.

“We’re trying to let [providers] know it’s coming, and it’s now landing on their doorstep,” said Papp-Green, who coordinates the congenital syphilis “salesforce.” “I think this problem is much bigger than we know, and could get a lot worse.”

Rates of sexually transmitted diseases in the U.S. are at record highs, and so are the number of babies being born with congenital syphilis. In Los Angeles County, African American women and Latinas shoulder the burden of the infection, accounting for 84 percent of congenital syphilis cases in 2017, according to public health figures.

Although the reasons for the epidemic are complex, David Harvey, executive director of the National Coalition of STD Directors, warned, “doctors are not screening and testing for STDs.”

“Shockingly, in America today, we have 1,000 – and it’s an undercount—1,000 babies born with congenital syphilis,” Harvey said at press briefing last year announcing national STD rates had soared yet again. “We know around 40 percent of them will be [a] stillbirth.”

From a mid-rise office in Los Angeles, Papp-Green fields texts and calls from reps as they criss-cross the county’s 4,000 square miles. Sometimes a rep has a question, sometimes a doctor does.

The county contracted with the sales reps after a similar successful campaign to promote wider use of the HIV-prevention drug PrEP in the county.

Drug reps “have the background for getting in the door,” Papp-Green explained. “They know doctors’ offices…the way a detective would know a crime scene.” For eight weeks this summer, the reps dropped in on more than 400 doctors — mostly Ob-Gyns, at least once.

Research has shown that drug reps influence doctors’ prescribing behavior. But armed instead with a public-health pitch, the county’s repurposed salesforce has proven equally skilled at selling syphilis testing to local doctors.

After the visits, the number of health-care providers who reported third-trimester syphilis tests nearly doubled, rising to 80 percent, according to a county survey of 220 providers. Catching syphilis at this stage is crucial to preventing transmission from moms to babies.

Certain doctors simply didn’t know the crisis was so dire that the health department recommended testing every pregnant women for syphilis. Others talked of exorbitant drug costs. Compounding this was intermittent shortages of the antibiotic to treat congenital syphilis, a multitude of societal factors, consumer shifts, such as the rising use of long-acting contraceptives, and delays in prenatal care.

“I’m a doctor, I’m not a detective — what do you want me to do?” was the refrain from certain doctors. Reps were coached to respond: the county can help.

The standard treatment for some stages of syphilis is Pfizer’s benzathine penicillin G (Bicillin L-A), an antibiotic that can run about $350 per dose. Mom-and-pop doctors offices told their reps they couldn’t afford to stock it. Fewer than half of providers surveyed reported offering syphilis treatment in their offices, which can delay treatment.

Now, these doctors know to send their syphilis patients to the nearest county clinic. In the best case scenario, a patient shows up for treatment.

In other instances, the county’s public health workers reach a pregnant women when she winds up in the hospital — like the woman who was diagnosed more than halfway into her pregnancy.

“You have to gain their trust”

It’s not uncommon for vulnerable women to skip prenatal care. Poverty, lack of health insurance, housing or transportation, and issues with domestic violence or substance abuse — what public health experts collectively call social determinants — can dictate the difference between a life of sickness or one of health, particularly with congenital syphilis.

More than one-third of women with congenital syphilis in Los Angeles County in 2017 had forgone prenatal care throughout their pregnancies, and nearly one in five delayed care until the third trimester.

“When you’re working with someone with an STD, you have to gain their trust and you have to be able to address all the issues that are troubling them,” explained Munoz, a public health nurse.

To better understand barriers to prenatal care, the county has conducted qualitative interviews with area mothers who’ve had a baby born with congenital syphilis.

According to county statistics from 2017, nearly half of women with congenital syphilis have been touched by arrest or incarceration. A bit more than half used drugs during pregnancy.

A pregnant woman with substance abuse issues who’s trying to get clean may delay prenatal care for fear of being “hooked into the system,” said Munoz. Recognizing the complexity of an individual’s life circumstances is crucial to understanding what’s driving the resurgence of congenital syphilis, she continued.

Substance abuse, homelessness, and other issues can “alert the health-care system to take measures, such as taking the child away or placing the mom in a rehab facility or jail,” Rajagopalan noted. What woman would seek treatment knowing it might cost her a child?

“So the fear of all of that makes a person not want to seek care. And it’s a vicious cycle.”