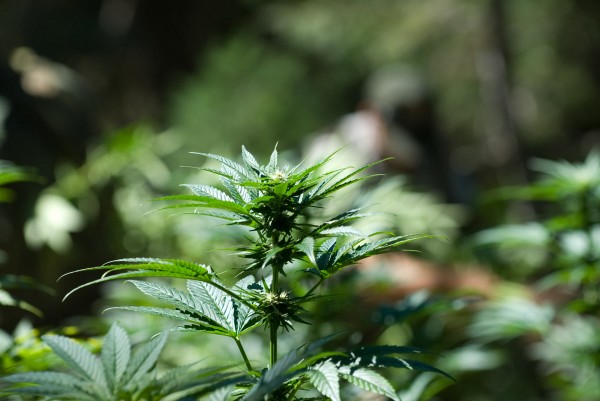 California’s growing marijuana industry is having an unforeseen consequence: An increasing number of young women in the business are facing exploitation in the state’s remote northern redwood country.

Lured by Humboldt County’s rugged beauty and a dream to live off the grid by growing weed, young travelers of both sexes are showing up with eyes full of dollar signs and heads full of Rastafarian days clipping buds.

Some don’t run into any problems, while others are drawn by the pot trade’s element of danger. But many women are surprised to find violent and volatile working situations are often part of the industry. A small emergency shelter is now an important stop on the women’s flight out of these domestic violence cases in the notorious Emerald Triangle.

“A lot of the activity that goes along with growing is like gang activity. It’s a similar mindset,” said Dawn Watkins, executive director of Women’s Crisis Shelter in Southern Humboldt, or WISH. “The reality is, it can be very dangerous. It’s very violent and it’s very controlling and it’s very dangerous to get into.”

Male violence against women is nothing new in the area. WISH has been operating for 25 years in the little town of Garberville. But now there are more women traveling through or camping in the area, and violent encounters are growing.

“We have definitely seen increasing numbers of people asking for help,” said Watkins, 44.

WISH’s nine-bed house provides shelter for an average of 140 women and 60 to 75 children annually. Roughly another 100 women get other services but never stay in the house. More than 90 percent of the cases involve current or recent domestic violence, Watkins said.

Until late last year, the nonprofit was run by a staff of one. Mary Balletta worked as the organization’s director and case manager for 11 years. She handed over the reins to Watkins in November with plans to retire. But she’s still providing client case management as Watkins adjusts to her new role and they seek funding for another staffer.

Together, they run the shelter in a three-bedroom house and meet with non-resident clients in other places – a cafe, a car, the fruit stand, etc. Each year, the shelter houses about 10 to 15 women escaping violence encountered in the cannabis trade.

Garberville, population 913, is a former logging town set in a lush valley on the south fork of the Eel River. About 200 miles north of San Francisco just off Highway 101, the tiny enclave is surrounded by steep hills and thick redwood forests home to a thriving arts community, a sustainable living movement and a large number of home-based businesses. While some make candles and weave wall hangings from locally spun yarn, others make a living growing pot in a region the BBC dubbed the marijuana heartland of the United States.

Helping women in these situations involves unique challenges. Many farms are in remote wooded areas reachable only by dirt roads. Communication is limited. The women are isolated and often living in substandard conditions in shacks, buses and vans without power or telephones.

In nearly half of the cases, the violence is perpetrated by a husband or boyfriend. In one case, a 33-year-old woman and her husband were growing pot and raising three children on a marijuana farm miles from Garberville. Her husband had a drinking problem, and was getting more violent. One day, he became extremely violent and threw the car keys into the woods. “Michelle” fled on foot with only a cell phone, climbed into a tree to hide and called Balletta.

“Still to this day, the scariest call I got,” said Balletta, who drove out with the sheriff in tow and searched the area until the woman stepped out of the woods and onto a paved road as night fell.

The average shelter stay is 35 to 40 days, but people can stay up to six months. Michelle stayed six months, won custody of the children and divorced the man with Balletta’s support. Balletta provided clothing vouchers, connected her with legal services, supported her through the court system, helped her find housing and provided job readiness services.

The bulk of other cases involve single young women aged 18 to 26, who may travel to the area and are lured to farms by promises of work, money and, often, romance. The women are hired for trim work, which involves cleaning freshly harvested pot and preparing it for sale.

Men managing the farms can be paranoid over the threat of raids or people stealing the plants. Women’s cell phones may be taken away and they may not be allowed to leave until season’s end. Some are forced off farms at gunpoint without being paid. Women may be beaten or psychologically controlled. Sometimes, what started as a casual hookup or dating scenario turns into demands for sex and even assault, Watkins said.

“It may have been fun at first. But it becomes clear they really don’t have a choice,” she said.

Most of the women and men are using hard drugs or alcohol, and about 85 percent of the crises are precipitated by substance use, said Balletta, a certified drug and alcohol counselor.

Last year, a state forest fire crew found a disoriented 23-year-old Southern California woman dubbed “Karen” wandering a back road in nothing but a sarong. Balletta took her to the emergency room, where they determined the traumatized woman had been slipped a date-rape drug and raped. She had been cooking, cleaning and gardening on a pot farm for three months and wasn’t allowed to go into town.

One of the young guys running the farm attacked her. She ran off but was afraid to seek help from neighbors, who were the pot growers’ friends. She thought she’d just be taken back to the farm, Balletta said.

WISH took her to a trauma care center, got her counseling with a rape crisis team and provided her with a safe, quiet home for three months while she began recovering. She was given food, clothes and transportation to services such as the district attorney’s office victim witness program. She reconnected with her family and arranged to go home.

While women who survive violence are often afraid to seek help, the WISH staff has found there’s even more pressure on women in the pot industry because the culture promotes secrecy to protect the farms and their way of life.

Women make an average of seven to 10 attempts to leave. Safety planning with women on pot farms also takes a unique twist. The WISH staff asks women where they can hide camping equipment, what they can pack to stay warm and how many nights they’re willing to spend in the woods before they can get to safety, Watkins said.

But the most crucial service they provide for clients, even those not staying in the shelter, is talking with them face to face, listening to their stories and offering validation and support without judgment, she added.

“I feel like that’s the heart of what we do. They’re spinning in their heads with all the things they think they should do. And they just look at me. And I tell them, ‘You don’t have to make a decision right now.’ People who have been through trauma can get really overwhelmed by seemingly simple, everyday things,” Watkins said. “We sit down and work through this emotional stuff that’s dragging them down. And the more we do this with them, the more they are able to do that themselves. That support – it’s immeasurable what that can do for people.”