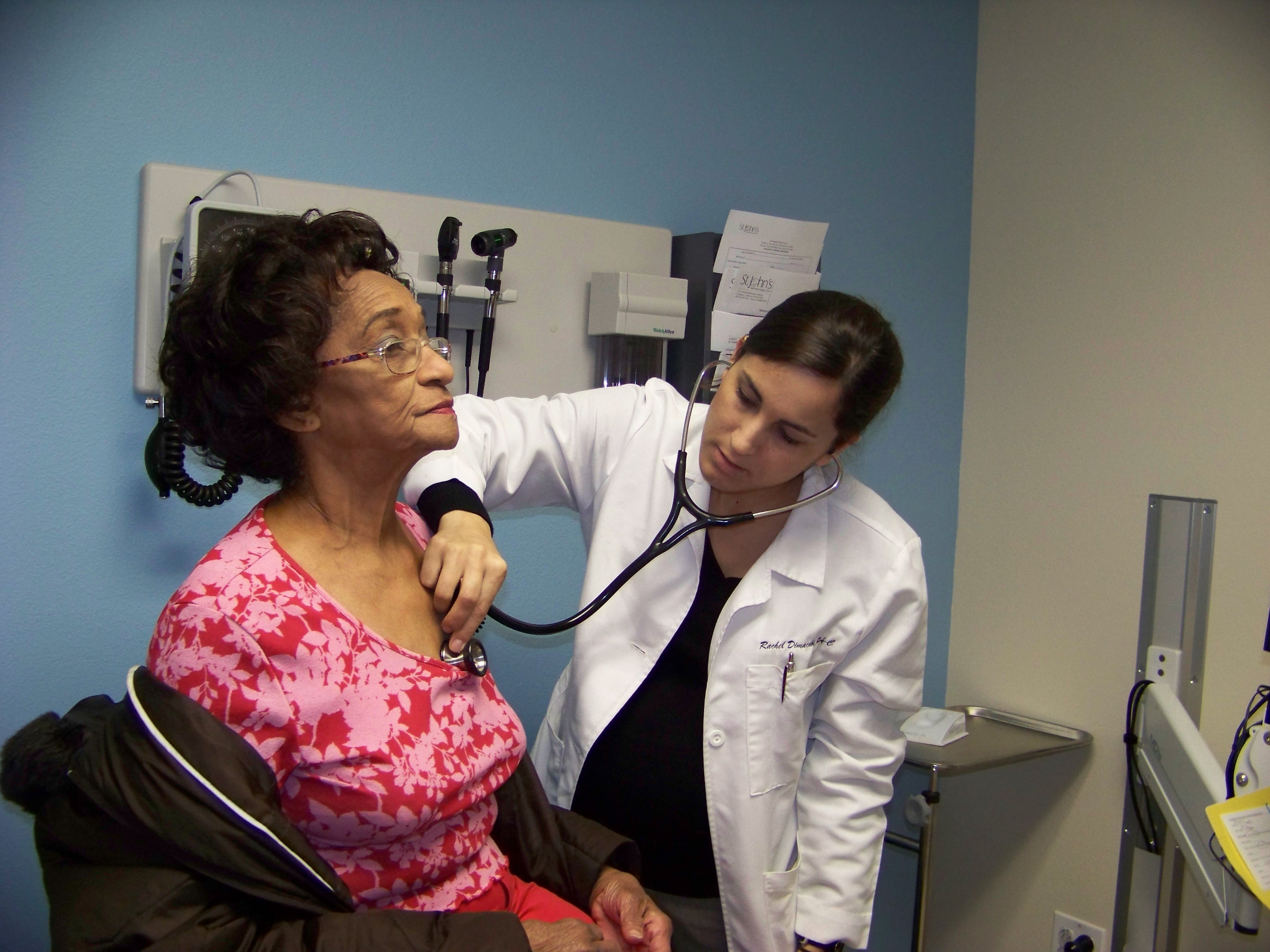 Just in time for the advent of national health care reform next year, Los Angeles-area schools are opening their first campus-based wellness centers, offering services not just to students and their families, but to entire neighborhoods.

On a recent day in Compton, the Dominguez High School Marching Band played and drill team dancers whirled and pranced to celebrate the opening of their new center.

The facility is operated by St. John’s Well Child and Family Center, which also will open another school clinic next week and a third next month. In five years, St. John’s president and CEO Jim Mangia expects to be operating dozens. He called such centers the fulfillment of the “medical home” envisioned under the Affordable Care Act.

“This is comprehensive, medical, dental, mental health, enabling services, care coordination, case management, social workers, linking families to the services that they need above and beyond health care,” Mangia said.

“So, this is a doctor’s office on steroids. And that’s the benefit of having community health centers on school campuses.”

“Sick children cannot learn well,” he said. “And it seems to me that if we want to put our young people on a path toward health, physical fitness, mental health as well, we have to put these facilities right on these campuses and make good things happen.”

Ridley-Thomas has long been a key supporter of such programs. In 2007, as a state senator, he wrote the legislation establishing a state grant program, and former Gov. Schwarzenegger signed the bill the following year.

In a brief interview after his speech, the supervisor said he plans to resume campaigning for California funding when the state’s fiscal health is restored. In the meantime, Los Angeles County is funding the construction of five new health centers in the southeast county this year, Ridley-Thomas said.

The wellness center continued in operation during the opening event, treating patients ranging from Dominguez High junior Arecely Sandoval, in for routine blood tests, to neighborhood resident Jonetta Stewart, 76, who’s been having frequent headaches and numbness in her hands. Physician assistant Rachel Dimacali suspected both are tied to Stewart’s high blood pressure.

Stewart admitted that she probably feels so bad because she’s been neglecting her health. Dimacali admonished her to take her medicine and make sure she keeps her appointments.

Dimicali said she sees a lot of variety in her fast-paced days.

“Like, my last patient was a 4-year-old kid and now I’m seeing Jonetta for her blood pressure management. So, we see a whole range, from chronic disease to urgent care visits to just physical exams.”

That’s the breadth of care envisioned as well in the Los Angeles Unified School District, which will open 14 campus wellness centers by next year, said Kimberly Uyeda, the district director of student medical services. Four are already in operation.

As in Compton, the centers have separate entrances for students and neighborhood residents. But they also acknowledge that the health of the two populations is intertwined, Uyeda said.

“So if we either don’t address or acknowledge or try to help the families and the communities, we’re only going to get so far with students.”

In 2008, the district’s nonprofit Los Angeles Trust for Children’s Health, district staffers and the Los Angeles County Department of Public Health organized a mapping program to try to identify factors surrounding high dropout rates and absenteeism. The maps identified 13 “hot spots” for social and health ills including exposure to violence, poverty, obesity and high rates of sexually transmitted disease. The group then used those geographic locations to begin planning the wellness centers. The school board initially invested $28 million for construction from bond funds designated for projects that could benefit both schools and their surrounding communities. Since then, the building fund has grown to $34 million.

Staffing is provided by nonprofit healthcare providers, and services are provided either free or at very low cost, Uyeda said. Many students and neighborhood residents are eligible for Medi-Cal or qualify under California’s “Bridge to Reform,” which includes increases in health care subsidies for the indigent.

Health-care advocates are lobbying congress for a $50 million appropriation this year to cover clinic operations.

“Fifty million nationally will certainly not go anywhere near the operating expenses of even a handful of clinics,” Uyeda said. “We’re hoping there will be some awareness building and some acknowledgement of the school health centers.”

Eventually, the Trust, which oversees fundraising, hopes to see a wellness center on every high school campus, providing services to a network of surrounding elementary and middle schools, said Maryjane Puffer, the Trust’s executive director.

The centers also may expand upon an earlier school district program that trained students to take family members’ blood pressure and alert them if they needed medical attention.

“The difference now is that they actually have a place on campus to refer them to, that’s comfortable for them,” Puffer said.