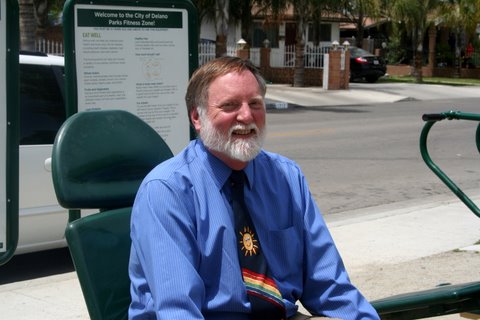 He pulled over to point out freshly-widened sidewalks and colorful new playgrounds. When he neared the empty field where a Wal-Mart will be built, he paused to explain local sentiments. Even though constructing the big box retailer was controversial, many residents wanted somewhere to buy plentiful, low-cost goods.

“You have to look at the community,” said Woodcock, 60, who is tall with ruddy cheeks and a white beard. “Government does a lot of talking and not a lot of listening.”

Listening has defined Woodcock’s role in this small agricultural town, 35 miles north of Bakersfield. In his four years working for the city, Woodcock has taken to the streets, engaging residents at street fairs or chatting in the grocery parking lot. He’s incorporated those insights into the city’s general plan, revisions he hopes will make Delano a healthier place to live.

“He involves everyone he can and is open to listening to folks,” said Lupe Martinez, the Delano-based assistant director of the Center on Race, Poverty & The Environment. “There is a real, sincere effort to get the community involved. They are beginning, in a big way, to start participating.”

Drawn to the Central Valley

Woodcock grew up in the Bay Area town of Los Altos, but he’s devoted his career to the Central Valley. His first planning job was in Fresno, and he worked his way around the state’s flat middle, in agricultural communities such as Soledad. There, he saw a pregnant woman living in a chicken coop, and realized the importance of providing affordable housing. Later, he got involved with building a mobile home park for farm workers that succeeded despite a NIMBY attitude.

“It felt really positive, to provide safe, affordable housing and see a difference,” he said.

Stints working for cities such as Firebaugh, Mendota, Merced and Wasco heightened his awareness of the Central Valley and the distinct challenges it faces – from air quality to water to lackluster community involvement.

Woodcock, who describes himself as quirky, once tried to convince Wasco to market itself with the nickname “Whimsical Wasco” and install twirling light poles. He wears expressive ties such as one designed by “Save the Children,” a bright sketch of a rainbow and sunshine. The former Boy Scout is an avid hat collector – from a fedora to a sombrero to a floppy hat that “could tell many stories”—and is known for having a messy desk.

Throughout most of his Valley jobs, Woodcock and his family have resided in Fresno, where he received a master’s degree in city and regional planning at California State University Fresno.

“I’m a Valley-ite,” he said. “I love the Valley and its open spaces. California needs to pay more attention to the Valley – the state is only as strong as our weakest link.”

When Woodcock took the Delano position in 2007, he studied the community’s history and current challenges. The city of about 50,000 had grim health stats, and its economic figures were equally disturbing.

In his experience working in the Central Valley, Woodcock had noticed that community involvement was too often limited to the usual suspects. People who were already informed, enfranchised, and empowered would dominate the discussion.

“People here are hardworking, dedicated people who want the best for their families,” he said. “They’re so involved with family income that when you talk about the general plan, what does that mean?”

He sought the advice of community leaders such as Martinez, who told him, “You’re not speaking their language and I don’t mean Spanish.” Woodcock got involved with Martinez’s organization, and tapped into farmworkers who heard their news on the Radio Campesina Network. He went door to door and invited residents to a city walkability workshop.

“A lot of times, folks in government are intimidating – they think they’re the experts and know best,” Martinez said. “Keith is open, humble and easy to approach, which is difficult for community members to do.”

When Woodcock held a meeting, he’d bring balloons. Once, he brought in a search light to attract curious onlookers. He attended local fairs, and spread the word at a City Walk that attracted 1500 people.

When Woodcock is staffing a city outreach booth, he’s not just sitting on the sidelines, said Martin Tracey, the city’s community services director. At a police department safety fair, Woodcock sponsored a contest at his booth which threatened to steal the show.

“A lot of the participators commented: ‘You’re hogging the traffic,’” Tracey said. “Keith’s become someone who is easily recognized. He’s very consistent in working events and talking to people.”

Woodcock also worked with the PhotoVoice project, which gave local youth 150 disposable cameras and asked them to take photographs of things they considered healthy or unhealthy. The young participants pointed to areas where there were no bike racks, or convenience stores that only sold processed foods.

“We found our touchstone and that was the children,” Woodcock said. “We got the kids involved and that started a dialogue.”

They heard from residents who couldn’t speak English, who were struggling with hunger, or who had lost their jobs.

“We talked to people who would never have talked to someone from the city,” said Kelly Main, the Cal Poly professor working on the effort. “Planners will often just expect people to come to them, but Keith will go out where people are, to find out what they want and need.”

Along with resident feedback, Woodcock layered research onto mapping software to look at the city’s populations and how they corresponded to park access. Parks were noticeably absent in several areas of the city, but school sites were distributed more evenly. If he could find a way to allow public access to schools’ green space, all areas of the city could be served. The city and school districts currently are developing an after-school policy that would allow public access to their spaces.

Woodcock amended the general plan to raise the city’s park requirements from three acres per 1000 to five. New city developments will have more park acreage, and parks will be linked by pedestrian and bike paths.

He also used mapping software to look at residents’ access to fresh foods, charting the types of options available by neighborhoods. He found the southwest area of the city had limited access to fresh foods, with mostly convenience stores that didn’t offer healthy options. Woodcock and the city are working with existing stores to add fresher items, such as fruits.

The same mapping analysis found that bus schedules for access to health clinics should be adjusted. Overall, there was a lack of medical care providers in poorer areas of the city. Now, the city is looking at properties to see if services can be brought to the communities there.

The revised general plan calls for improving overall bike access, with about 30 miles of streets newly classified for bikes. The plan will also create a new design for the central 11th Avenue, which will include more provisions for pedestrians, bike lanes and wider sidewalks.

Woodcock has also been a key player in bringing a farmer’s market to town.

This summer, the city is voting on sections of the revised general plan. But, observers say Woodcock has already accomplished the hardest part: getting the community to care.

“In Delano, he has been able to reach out to the community, and they are beginning, in a big way, to start participating,” Martinez said. “I would like to think Delano is very progressive.”

Residents are already enjoying the fruits of Woodcock’s health efforts. On a sunny spring afternoon, Monica Garnica watched her son Izaya, 5, explore one of the city’s newest playgrounds.

“I think it’s awesome,” she said. “We saw the jungle gym, and we just had to come over. The climbing wall is great for exercise.”

At another new park on the tour, Woodcock pulled over the car, got out, and demonstrated the green exercise equipment himself – despite the fact he was wearing a button-down shirt and tie.

“This has been a very big community success,” he said, pointing out the lack of vandalism. “Planning can play a vital role, but you’ve got to get the people engaged.”