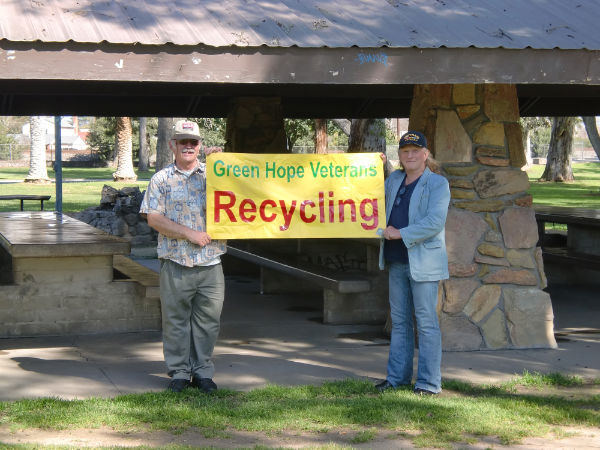 A long line of drenched men huddled together outside a Fresno shelter, hoping to get a warm meal and bed in the middle of a winter storm on a recent evening. It was a typical night for Ed Sanders, 57, a homeless veteran. Green Hope Veterans, a nonprofit organization in Fresno, plans to help local vets like Sanders by providing them with affordable green housing.

The homeless lucky enough to get into this Fresno shelter are given a milk case to put their few belongings in. They eat and then strip down to stand in line with twenty or so others waiting to use the shower. Then it’s lights out until 5 a.m. when they go back to the streets.

“I dare you to spend one night at the mission,” Sanders said. “It’s humiliating.”

Sanders served as an Air Force sergeant for the Chaplains’ department in Lackland, Texas from 1972 to 1976. Now disabled, he’s unable to work fulltime. His financial struggles have led him to where he’s lived until very recently—the streets of Fresno.

Sanders isn’t the only vet on the city streets. According to a study conducted by Fresno County, there were slightly more than 2,000 unsheltered homeless people in Fresno in 2009. An additional 1,670 homeless were found in shelters or temporary housing in early 2010. The percentage of these who are veterans hasn’t been pinpointed, but Charlie Waters, a Marine Corps veteran and Central Valley Veterans Home Foundation board member, estimates that the number of homeless veterans in Fresno is well over 200.

Green Hope Veterans hopes to help some of these men find homes that they can afford to live in—by building them with the help of other homeless vets. Executive director Eugene Brazil founded GHV, a non-profit that also helps vets with job training and counseling, in 2007.

“We wanted to do something different from other veterans’ organizations in the area,” Brazil said, “and that’s where the green housing element came in.”

GHV has been working on its prototype, the Eco-Cabin, since last June. The cabin is a pre-fabricated 256 square-foot housing unit made almost entirely of recycled materials. The inside of the Eco-Cabin will be equipped with a refrigerator and stove that run off propane natural gas, a three-in-one solar-powered air conditioner, central heater, hot water heater unit, LED lighting, and solar panels to power household electronics, like televisions.

Building and equipping each cabin using these solar and natural gas products will cost about $7,000, according to Brazil. However, because GHV is helping the homeless build the homes themselves, there is little labor cost.

The green homes will also help the struggling vets save on utility bills. “The principle is to flip the switch and get off the PG&E grid so they don’t have to pay those huge bills every month,” said GHV board member Henry Anderson. “Just adding the LED lights will save tons on the electric bill.” An LED light, he said, uses one-tenth the energy an average incandescent light bulb does.

The biggest money saver, however, will come from implementing solar energy in the Eco-Cabin. The prototype uses a solar compressor in addition to solar panels. The compressor, unlike a solar panel, connects directly to and powers one of the biggest energy users—the air conditioning, central heating, and hot water unit.

The compressor, Anderson said, will not only cool a 1,200 square-foot home, but in the wintertime will heat it. It will also serve as the hot water heater year-round. “It turns Fresno’s enemy, the sun, into our friend,” Anderson said.

The prototype, which Brazil expects to be completed this summer, will house one or two of the 24 homeless veterans that are helping build it.

The reasons for veteran homelessness are similar to those of all homeless, Waters said. Some are simply jobless, others suffer from mental disorders or have substance abuse problems, and some have a combination of these risk factors. For veterans, post-traumatic stress is one common problem that contributes to homelessness.

“Everyone who has been in combat has had a certain amount of exposure to post-traumatic stress,” Waters said. “Many veterans have seen their buddies blown to pieces—that’s war. It’s a tough situation and we’ll never forget it as long as we live.”

Sanders has been working on the Eco-Cabin throughout the process. Most recently, he constructed the frame of the roof crust, which supports the entire roof of the unit. “It took some work to put together, but it was worth it,” Sanders said.

Though he’s recently found temporary housing on his own, he says it’s rewarding to know his work is going to help others like him. “I’m very proud of it,” Sanders said. “It’s just one thing, but it’s part of this project that’s going to get a veteran off the street.”