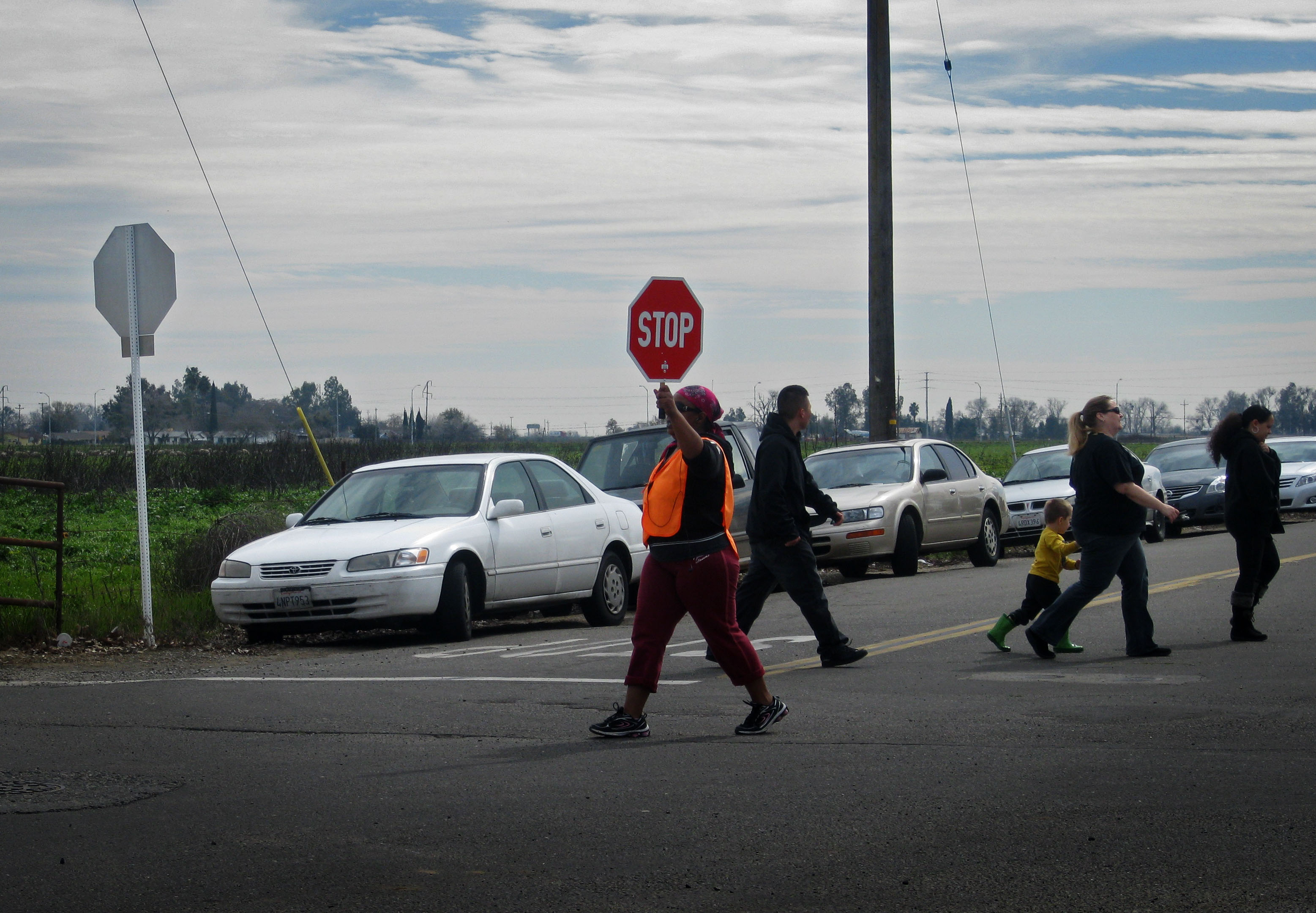 Pioneer Elementary School in Merced has two pedestrian pathways for kids who walk to school: one’s a paved sidewalk and the other is a strip of gravel on the side of the road. A local organization is trying to bring more sidewalks to pedestrian-heavy areas like the elementary school with GIS mapping, but ongoing efforts to improve Merced’s walkability might be cut short by budget shortfalls.

Using aerial photography and Geographical Information Systems (GIS) software, the Merced County Association of Governments has mapped out the locations where there are incomplete or non-existent sidewalks, what they call sidewalk deficits. The sidewalk inventory began when valley counties started upgrades to their traffic models in 2010 that included alternative modes of transportation such as transit and pedestrian access.

So far, the process has shown what many residents already know. Merced could stand to be more pedestrian friendly.

The lack of sidewalks makes it difficult for people without cars to navigate daily life. Gloria Minero, 57, waited for the school bell to ring at Pioneer Elementary School on a recent afternoon. She regularly walks her grandkids, a first and fourth grader, home from school. When the bell rings, a flood of children come out of the gates, some jump into cars. Others walk, some taking a paved sidewalk west to a newer development of homes, some to the gravel on the side of the road that doubles as a sidewalk.

Minero said she’s lucky, because she lives in the new development and has a straight sidewalk path to and from the school. Without a car, however, she can’t get to many other places in Merced as easily. “Some houses have sidewalks,” Minero said. “Others don’t.”

MCAG is still validating their GIS findings by checking them against other sources of information, and don’t have an exact count of how many sidewalk deficits exist in the city or county yet. Rich Green, MCAG’s GIS program manager, said that he is not surprised by the findings so far. Small county pockets have many deficits, as do the outermost edges of the city of Merced, such as the Weaver area.

Pioneer, a K-5 school in the Weaver Unified School District, is one area of particular concern because many of the pedestrians are children, said district superintendent John Curry.

Most of the 2,500 students in his district have adapted to the lack of sidewalks and have developed safe walking skills, Curry said.

Parents have adapted too, organizing carpools and creating a ‘walking school bus’ for children to safely get to and from school, all with the support of the school board and the Safe Routes to School program.

“We are using a multiple approach, educating our students, newsletters, simple things,” he said. “We are also having good conversations with other schools and the city to find solutions.”

The city of Merced has been doing its part to upgrade sidewalks, councilman John Carlisle said. “We spend a lot of time and money in (improving) the sidewalk system,” Carlisle said.

He cites the construction projects that are underway, such as the G Street Undercrossing and the Parsons Avenue Shopping Center and Street Improvements projects that all pay special attention to bicycle and pedestrian access.

Still, the GIS maps may not be capturing the full extent of the sidewalk problem. While MCAG is mapping where sidewalks exist, they are not collecting information on the condition of the sidewalks. In older parts of Merced, sidewalks show up as street grids marked mostly in a bright blue, indicating deficit-free sidewalks, but they may be hard to use. Walking through an old part of town like south Merced means navigating obstacles like raised tree roots and other wear and tear.

The combination of grants, redevelopment funding and Measure C monies that has financed sidewalk renovations so far will likely dry up as Merced tries to find a way to fill a deficit nearing $5 million.

“The issue has been and will continue to be a lack of money,” Carlisle said.

But there will come a time when the city will once again be able to invest in improving pedestrian access and when they do, Green said, MCAG hopes to have a comprehensive plan with feedback from all the stakeholders.

In April, MCAG will take their findings on the road. Aside from getting input from city agencies, they also want to get reaction from the very people that walk on those streets on their way to school, the grocery store or work.

“We would like to have sidewalks,” Curry said. “We know they are coming. We just don’t know when.”